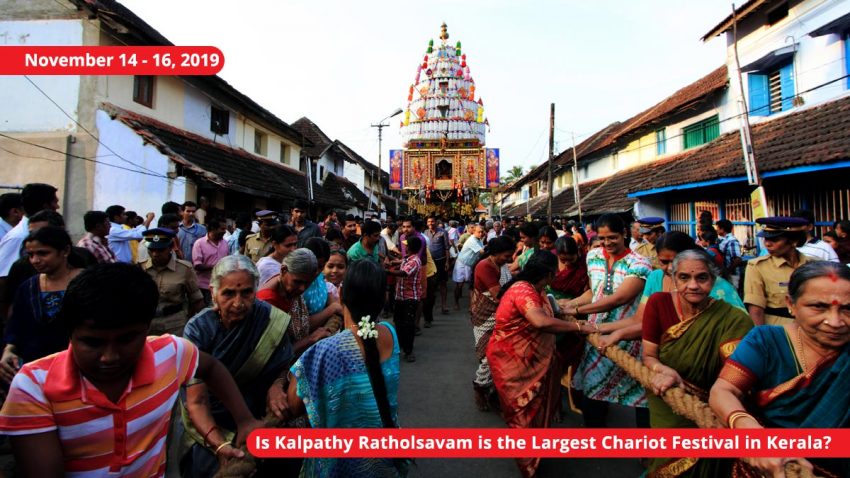 On the Kerala-Tamil Nadu border, in Palakkad district of Kerala lies Kalpathy which is home to early Tamil Brahmin settlement or Agraharam, is crowned as the first heritage village of the state. This historic land of culture and tradition is known as the ‘Varanasi of the South‘ and also there is a popular saying that ‘Kalpathi is Half-Kashi‘. The Tamil Brahmin settlement in Kalpathi dates back to the 12th century and it still retains its old charm; the Kolams (designs or patterns drawn using rice flour) in front of every household, the Agraharams sharing common walls, having sloped roofs (with raised plinth) aligned East-West and all clustered in opposite directions, the Sanskrit slogans that reverberate around, etc, are some of its proof. Kalpathi is remarkable for its unique and noteworthy architecture, Tanjavur style of Carnatic music and the world-renowned Chariot Festival known as Kalpathi Ratholsavam.

Apart from Kalpathy Ratholsavam, this small village in Kalpathy is known for its rich cultural heritage and significance. If you are a frequent traveller and is looking for your next travel destination in Kerala, then Kalpathy may just be the right locale to explore as it provides a refreshing ambiance filled with a rich heritage.

Kalpathi Ratholsavam is world-renowned and is said to be the biggest chariot festival in Kerala. Sri Visalakshi Sametha Sri Viswanatha Swamy Temple in Kalpathi, built over 700 years ago plays the host to this grand chariot festival. The temple is dedicated to Lord Shiva and his consort Goddess Parvathi who are worshipped as Lord Vishwanatha Swamy and Visalakshi. Usually falls in the month of November during the last week of Tamil month of Aippasi, the festivity of Kalpathi Ratholsavam lasts for 10 days with streets wearing a festival look and teeming with devotees and visitors from near and far.

But the last three days is when you can witness the real grandeur of the festival during which the chariots from the nearby temples blend in with the main procession of chariots carrying the idol of the Lord Vishwanatha and Visalakshi. These chariots are intricately carved and are beautifully decorated with flowers, flags, sugarcane, coconuts, etc. and are religiously pulled through the streets by thousands of devotees, offering a splendid sight.

Did You Know: Kalpathy Car Festival was the biggest festival of Malabar in the erstwhile Madras presidency, second only to the Puri Jagannatha Swamy Temple Ratholsavam in Odisha.

Kalpathi Ratholsavam begins with the flag hoisting ceremony known as Dwajarohanam. The religious ceremonies for the Ratholsavam take place in the four Tamil Brahmin Agraharams in Kalpathi namely New Kalpathi, Old Kalpathi, Chathapuram and Govindarajapuram. Recitations of Vedic rituals and cultural programmes are held during the first four days of the festival.

The final three days are more fascinating with the procession of beautifully decorated chariots and it culminates with the Devaratha Samgamam or the coming together of the chariots carrying deities from nearby temples. Caparisoned elephants along with the percussion beats add to the fervor of the festival and offer a visual treat amidst divine ambience.

A large number of foreign tourists visit Kalpathy to witness this colourful festival.

The Crowning Glory of Kalpathy Ratholsavam – the Stupendous Sky-Scraping Chariots:

The stupendous sky-scraping chariots adorned with flowers and intricate carvings highlight the most striking feature of Kalpathi Ratholsavam. These chariots are decorated in such a way that it dignifies the deities that are placed inside them. The main chariot carries the main deities of Sri Visalakshi Sametha Sri Viswanatha Swamy Temple – Lord Shiva and Parvathy while other 2 small chariots carry their sons, Ganapathy and Murugan. Chariots from Lakshmi Narayana Perumal Temple of Old Kalpathi carry Lord Krishna while the  Manthakkara Mahaganapathy Temple of New Kalpathy and Mahaganapathy Temple of Chathapuram carries the idol of Lord Ganapathy. All these chariots blend with the main procession to form Devaratha Sangamam which is worth experiencing.

About Kalpathy Temple and Its History:

Built around 1425 AD on the banks of the Kalpathy River, Sri Visalakshi Sametha Sri Viswanatha Swamy Temple or the Kalpathy Temple is believed to be one of the oldest temples dedicated to Lord Shiva in the Malabar region of Kerala. Lord Shiva and his consort are the main deities of this temple who are fondly known as Viswanatha and Visalakshi. The steps that lead to the river that makes you think of Kashi Vishwanath Temple and the Golden Hall or the Kanaka Sabha are the main peculiarity of Kalpathi Temple.

Legends has it that a Brahmin widow named Lakshmiammal went to Kashi for pilgrimage and brought a Shiva Lingam from there. She gave 1320 gold to the then Raja of Palakkad, Itikombi Achan and asked him to build a Shiva Temple on the banks of Kalpathi River like that of famous Kashi Vishwanath Temple which is built on the banks of river Ganga and install the Shiva Linga there. For this reason, Kalpathi is known as “Half of Kashi” or “Kashiyil Pakuthi Kalpathy”.

How Kalpathy Became A Cluster of Tamil Brahmin Settlements:

It is believed that once after the Kalpathi Temple was built in 1425 AD, the temple priest had a conflict between the local rulers. So, the King had to seek help from the Brahmins of Tanjavur in Tamil Nadu state to continue the daily poojas and rituals at the Kalpathi Temple. This is how Brahmins from Tanjavur reached Kalpathi as folk and settled here with their families. Very soon Agraharams or Brahmin settlement were built in and around Kalpathi and as time passed by Kalpathi became a cluster of Tamil Brahmin settlement.

Coimbatore International Airport is the nearest airport to Kalpathy which is situated at a distance of 62.8 Km.

Palakkad Railway Station is the nearest railway station to Kalpathy which is situated at a distance of about 2.3 Km.

Palakkad is well-linked to other major cities Chennai, Mangalore, Bangalore, Coimbatore, Salem, Madurai, Ooty, Palani, Kodaikanal, Kozhikode, Thrissur, and Kochi via road. National Highways NH 217 and NH 47 pass through Palakkad. One can board a bus or taxi to reach Kalpathy.

Save the date and join with us to witness the grandeur of Kalpathi Ratholsavam.

South Tourism offers various tour packages and customized holiday packages to take you through the rich cultural heritage of Kerala and to be a part of its vibrant festivals.

Feel free to visit www.southtourism.in and get the best deals for your itineraries.