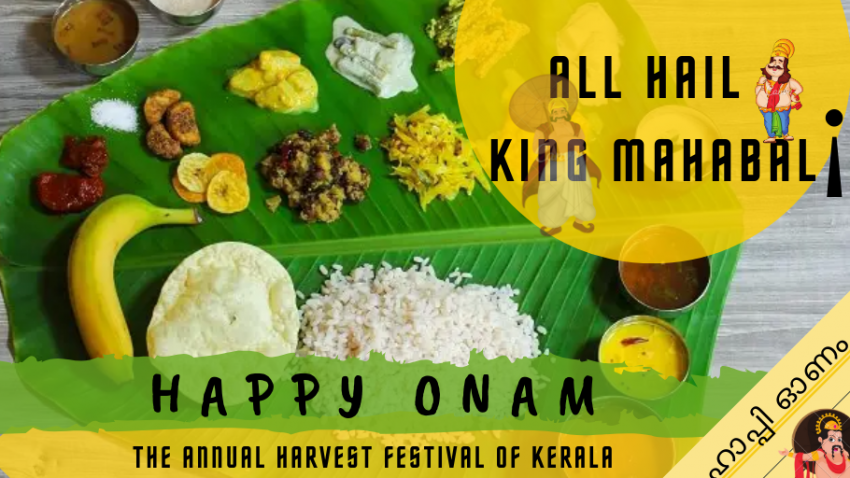 Imagine a land full of colorful scenes, abundant Nature, silence, romantic boulevards, coruscating culture, beautiful beach sunsets, and happy vibes. A hardcore traveler will paint the image of Kerala for its ubiquitous charm and travel appeal. A linchpin fest as a delectable icing on this Nature’s cake belongs to a mega-event – Onam Festival. It is considered as the New Year in Kerala which marks the time of the summer harvest. An event to celebrate with your family and friends sharing happy moments, lip-smacking food, and treasured secrets. Let the positive vibes of magnanimous Mahabali enter your homes spreading love and laughter. Happy Onam everyone!

The Tale of King Mahabali, the Great!

Mahabali was one kind-hearted king ruling his kingdom in a beautiful way. People liked him for his generosity, impressive strength, and heartwarming character. He was the grandson of Prahlad and son of Virochana. Due to his earnest efforts to better the kingdom and increase happiness among people, his fame started to spread across all lands and worlds. Devas feared his growth and were frightened that they would lose their respect and kingdoms. Indhira thought of ending the rule of Mahabali and found a solution. His mother pleaded Lord Vishnu to transport Mahabli to a different world as other Asuras will start making trouble if Mahabali wins all of their kingdoms. Lord Vishnu went to Earth as a dwarf Brahmin boy and met King Mahabali.

Mahabali asked about his wish and was ready to give whatever he wanted! The small boy replied,” I’ll take three steps and what I cover with those steps will be my land.” King Mahabali was surprised by such a small wish and replied, “If you say so.” As soon as he finished his words, the small boy started growing without limits and stood like one more planet before King Mahabali. The honest king realized it was Lord Vishnu who was doing it all and stood silently. Lord Vishnu’s first step covered Earth, the second step covered the skies and to keep his third step there was no space. To keep up his promise, King Mahabali bent before Lord Vishnu and offered his head. Ulagalantha Perumal Temple in Kanchipuram has a statue describing this story. With one stamp, King Mahabali entered the Underworld. Yet his final wish was fulfilled by Lord Vishnu. The king was so connected to his kingdom, he requested Lord Vishnu to allow him to visit Kerala once in a year. Lord Vishnu due to his pure dedication, accepted the wish. It is believed that during “Thiruvonam”, King Mahabali would return to his kingdom in Kerala to see his happy living folks.

The Cultural Significance of Onam Festival

Onam was used to be celebrated for a month in the yesteryears. This festival dates back to the Sangam Period and still highly revered by all religions. The festival reinstates harmony among Hindus and Christians. The latter celebrates the festival by lighting Nilavilakku; performing arati and flower waving over their holy book – Bible (Pushparathi). The importance of brotherhood and sisterhood is further celebrated by having lunch with the Hindu people. This explains the beauty of this inevitable festival to hold on to the Unity in Diversity roots of India. in some parts of Kerala, Muslims too join the celebration by lighting their homes with Nilavilakku. Married women doll up themselves in Kasavu Sarees further enhancing the feel of the festival.

Kannur and Kasargod potters celebrate this festival in a creative way, producing excess products to satisfy the growing demands. Ox Races, Uriadi, Pookolam, and Food-Eating competitions, Onakkalikal, and Onam Swings make Onam celebrations a grand success every year. On Thiruvonam (The Sacred Onam) day, “Onam Sadya” is made, marking the agricultural importance of the festival along with mythology. Here is a list of five major cultural events celebrated during Onam.

This is the first day of the prestigious Onam festival which is celebrated with a lot of passion and cultural palettes. A staggering street parade of various artists of Kerala will create the much needed festive atmosphere. From caparisoned elephants, contortion artists, dancers, and musicians to carnival tableaux, Tripunithura Athachamayam is a great opening ceremony for Onam Festival.

Onam Pookolam or Festival of Flowers holds a greater part in the Onam celebrations. Young women gather around and showcase their talents in floral patterns to create beautiful kolams. Pookolam Competitions have its set of audience in this battle of the beautiful floral designs. Like a flower mat, it is spread across the threshold of homes and temples in Kerala.

Pulikali means the “Play of the Tiger” which is famous in Tamil Nadu as “Puliaattam”. This heroic and manly dance performance triggers unbelievable emotions among the crowd. The erstwhile king of Kochi popularised this event and move their body with courage and grace according to traditional music. Pulikali performers paint their body resembling a tiger and carry the 200-year-old rich tradition of an intense dance event.

This famous boat race is another important event of the Onam festival which includes Nehru Trophy Boat Race and Aranmula Uthrattathi Boat Race. The snake boat race or Vallamkali happens on the Pampa river in a striking procession. A must-watch event on God’s Own Country, Kerala.

Onam Sadya or Onam feast is the highlight of Onam Festival of Kerala. Around 11-13 dishes elegantly find spaces in the banana leaf. This mouth-watering healthy nine-course meal is one form of worshipping Onathappan (Vamanan) or Lord Vishnu. This is a mark of respect to Kerala’s beloved guest – King Mahabali. After the second day (Thiruvonam), the third day or Avittom marks the sending off celebrations for King Mahabali to heaven. Later, the Pookolams are removed symbolizing Mahabali’s entry to heaven.

For more such interesting mythological stories and colorful celebrations pertaining to South India, follow South Tourism on Facebook, Instagram, and message your travel ideas. We can formulate the best plan and send our latest package for you to experience South India the way your heart craves. Be it your honeymoon trip or a temple tour, South Tourism takes care.