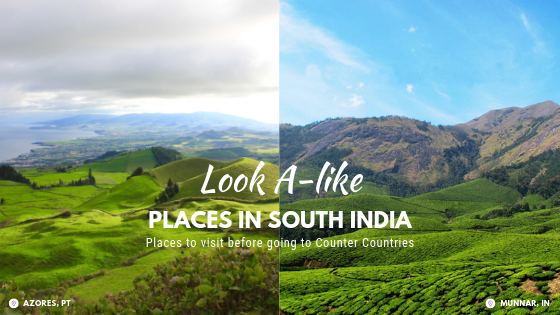 When you are thinking of exploring the world, two hurdles come before your eyes: Time and money. To overcome those hurdles easily, you can find look-alike destinations of other countries in South India. You can visit all those destination in South India with minimal amount of time and money. Foreign destination like places in South India are best to explore. India was ruled by different dynasties or empires in different places of India. They left but their architecture and food habits stand still and speak their fame. Some places look similar in their country. We have handpicked those similar destination geographically and presented to you.

Pondicherry is aptly known as French colony of India because of the Empire culture is deeply rooted and everywhere you can see French architecture. Roads of France and Pondicherry is similar for its buildings and pastries.

Trek the mountain to see the sun rise above the clouds. The mountains of Hawaii and Skandagiri looks similar.

Coorg is also commonly known as “Scotland of India”. The climate might be similar throughout the year. The green carpet worn in mountains and climate in Coorg makes us to think of Scotland.

World famous Niagara waterfalls in Canada has gallons and gallons of water cascading from huge rocks which connects US. Athirapally is often referred as “Niagara of India”.

Points of parity between Venice & Alleppey is WATER. Boats are the most transportation medium in City. People sail through the waters to ply around in the city.

The common thing about them is pristine clean beaches and clear water. Greek island is like Andaman based on the geographical conditions.