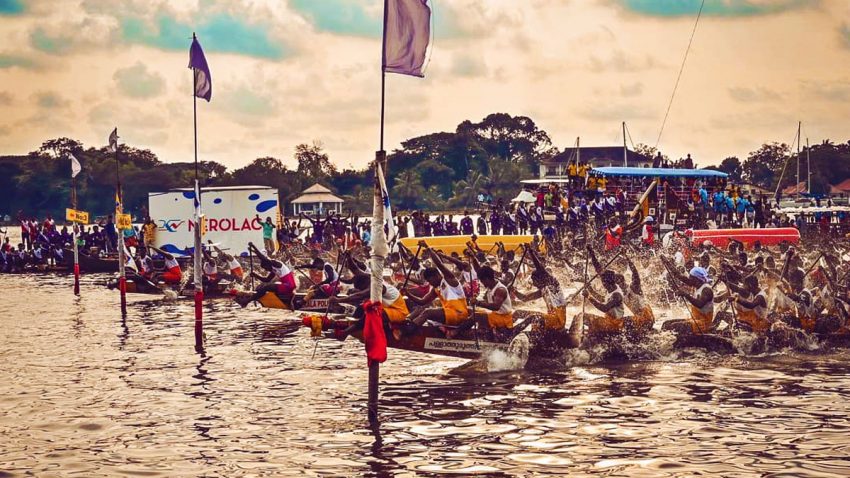 Much more than just a competitive sport, the legendary Snake Boat Races are a matter of pride for the people of Kerala. Its a visual treat beyond compare that showcase culture, tradition, passion, celebration and strength as well as infuse life into Kerala’s tranquil backwaters.

And now, Kerala’s traditional Snake Boat Races are getting an IPL style makeover and this brand new appeal is named Champions Boat League (CBL) which is the country’s first-ever boat racing modeled on Indian Premier League (IPL) format. The Champions Boat League 2019 was kicked off on August 31st with the most renowned Nehru Trophy Boat Race held at Punnamada Lake in Alleppey and will conclude with the President’s Trophy Boat Race taking place at Ashtamudi Lake in Kollam on November 23, 2019.

Usually, President’s Trophy Boat Race is conducted every year on November 1st when Kerala celebrates Kerala Piravi, its Formation day. But as the Nehru Trophy Boat Race 2019 was postponed due to heavy rainfall in Kerala, this boat race is also delayed.

The gateway of Ashtamudi Lake in Kollam district of Kerala is the venue of Presidents Trophy Boat Race. The presence of the President of India makes the event even grander and the trophy which is given to the winning team is instituted in the name of the President of India. With President’s Trophy Boat Race 2019, this year’s season of boat races in Kerala comes to an end as well as marks the finishing event of Champions Boat League 2019.

Kollam, also known as Quilon or Desinganadu, is the place that takes the credit for being the hub of the country’s cashew trading and processing industry and the Ashtamudi Lake here is the gateway to the magnificent backwaters of Kerala.

Kollam is also considered as one of the oldest ports on the Malabar Coast and has long been drawing the attraction of international countries. Here we have listed some of the top tourist places to visit in Kollam district.

By Air:
Trivandrum International Airport is the nearest airport to Ashtamudi Lake which is situated at a distance of 80.3 Km. On arrival at the airport, one can hire a taxi or board a bus to reach Ashtamudi Lake in Kollam.

By Road:
Kollam is well-connected to all major cities of the country via NH-47, NH-220 and NH-208. One can make use of state-run or private buses, hire local taxis or autos to reach the Ashtamudi Lake.

Experience the most popular and spectacular snake boat races in Kerala, the President’s Trophy Boat Race which is going to celebrate on November 23, 2019.

Never miss this event on your trip to Kerala during the month of November.

South Tourism will help you to plan a perfect holiday trip to Kerala to explore the unexplored places of Kerala and other South Indian places at the best price with customized holiday packages.

For more details, visit www.southtourism.in and get up to 15% offer on every tour packages.

Enquire now and get the best offers for your itineraries.