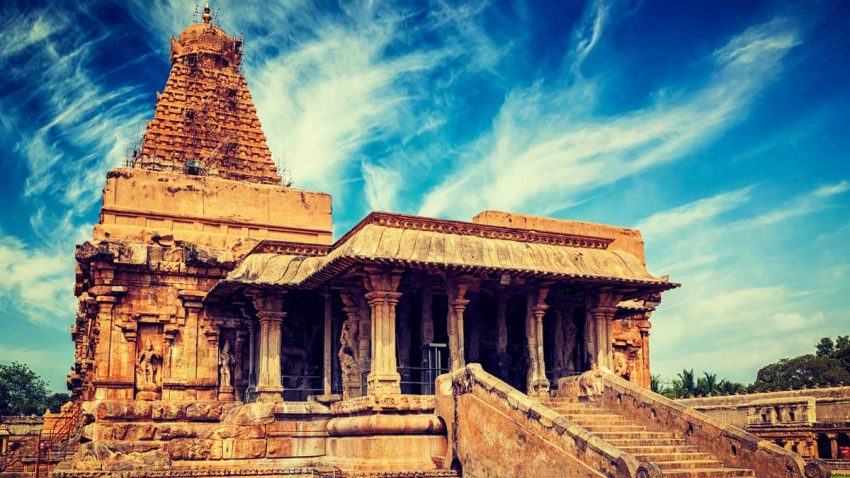 The grand celebration of the consecration ceremony at Brihadiswara Temple, Tanjore is in the headlines today. The engineering marvel, architectural grandeur, mystical beliefs and above all, the eternal fame of the Great King Raja Raja Cholan made this function a fantabulous one. Further to the consecration in 1997, after 23 years, the Maha Kumbhabhishekam has been done today morning attended by thousands of devotees and celebrities flooding the area from all corners of the state.

Popularly know as Brihadiswara temple this temple is also known as Rajarajesvaram or Thanjai Peruvudaiyar Kovil or Tanjore Big Temple. The Thanjavur Brihadeeshwarar Temple has set its foot very strongly in history with its magnificent architecture, which one could not have imagined even during the recent past, with all such technicalities at hand. The entire temple was constructed within a span of just SIX years between 1004 CE and 1010 CE. Even after crossing ONE THOUSAND years, the temple throws us into mystery and surprise with its architectural brilliance. The temple houses Lord Shiva in the form of Linga idol called as Lord Peruvudaiyar or Brihadiswarar and his consort Goddess Periya Nayaki is in a separate Shrine.

Brihadiswara temple bags so many credits that it is the world’s first ever temple fully constructed using granite stones. The monolithic stone atop the tall sanctum tower weighs around 80 tonnes. The Linga idol and the Bull statue facing the sanctum are of magnificent sizes, which one can never imagine before visiting them. The sanctum maintains the weather condition just contrary to the outside temperature. That is, when you are entering from a hot environment into the sanctum, you can feel the chill, and during winter, the sanctum is so warm. Technology says the entire sanctum is made up of a special variety of stones called Chandra Kantha Stones. The ceiling of the corridor proceeding to the sanctum displays the 108 poses of the classical Bharatanatyam dance, a visual retreat on your way to worship God. The temple has been listed as Great Living Chola Temples by UNESCO, admiring the longevity and architectural brilliance, sustaining after so many centuries.

The man behind all these achievements is the Great Emperor Raja Raja Chola I, also called as Arunmozhi Varman. He is the most popular King of the entire Chola Dynasty, and even after a thousand years, people get goosebumps after reading about his achievements and his life history. Raja Raja Cholan went beyond the boundaries and kept expanding his territory across regions, states and even countries like Maldives and Srilanka. He was the only emperor to have his Navy force during those times taking control of the entire Bay of Bengal. Born in 947 CE and ascending the throne in 985 CE, the achievements made by him till he died in 1014 CE are indeed endless and was almost impossible for any other rulers of this country.

The legacy of Raja Raja Chola was continued by his son Rajendra Chola and is exhibited in the form of another marvelous temple in Gangai Konda Cholapuram, which can be acclaimed as a replica of the Thanjavur Big Temple.

Tanjore Big Temple is the cultural icon of Tamil Nadu, completely built in the Dravidian Architecture. The prominent highlights are, in such a landscape like Tanjore, mainly an irrigation land, the ways and means for the huge stone temple remains unanswered even today. The temple walls bear the inscriptions with the list of people donated for the construction of the temple and those who were physically involved in the construction and also the supporting staff like cooks, washermen and others who were by the side of those working hard for completing the entire temple in six years. This great gesture of King Raja Raja is seen as one of the very many factors for his legacy.

King Raja Raja is remembered gratefully for his magnificent Brihadiswaara Temple, the eternal contribution to the society,  making every citizen of Tamil Nadu very proud in the global forum. Even today, during the consecration, we could listen to the narrators of the festival, explaining so much about the Great King and his achievements, inferring the fact that, Big Temple and Raja Raja Chola are inseparable till the day this universe ends.

The temple was closed for a few weeks in view of today’s consecration ceremony. We invite all our clients and devotees to visit this temple which reopens from today, after the celebrations.

Experience your heart skipping a beat, looking at the grand towers and the huge idols, taking you through the glorious past of Cholas and the beloved Great Raja Raja I.