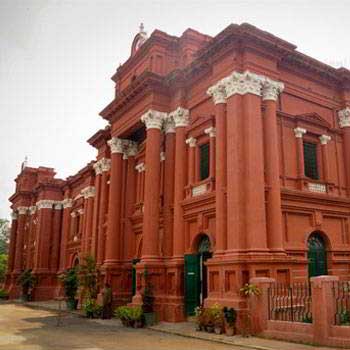 Government Museum Venkatappa Art Gallery(VAG) is situated in Kasturba Road, in the vicinity of Cubbon Park and next to the Bangalore Museum as well as the Visvesvaraya Industrial and Technological Museum. Venkatappa Art Gallery came into being with the foundation stone being laid by the then Chief Minister S. Nijalingappa on 24 November 1967.It was intended to function both as a museum holding the works of K. Venkatappa as well as becoming a space for artists from all over Karnataka to use for their practice. VAG is commonly mistaken for the Bangalore Museum as they both stand next to each other and yet they are very different. Spread in two floors, this art gallery has more than 600 paintings belonging to 2000 BC till the medieval period.