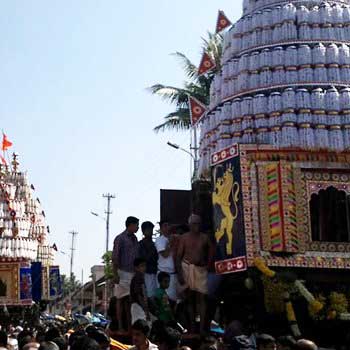 Kalpathy Chariot Festival, which is locally known as Kalpathy Ratholsavam is one of the famous festivals being celebrated in Kalapathi Village at Palakkad district in Kerala. This is a ten days festival being celebrated every year in the month of November. The venue of the Festival is Shri Viswanatha Swamy Temple in Kalpathy, where the deities are Lord Viswanatha (Shiva) & his consort Parvathi. And this is the Oldest Shiva temple in Malabar, built by the Raja of Palakkad on 1425 AD having similarities with the famous Kashi Viswanatha Temple in Varanasi in North India.

Kalpathy village is an early Tamil Brahmin settlement. Legend says that a Brahmin widow named Lakshmiammal went to Banaras (Kashi) and brought Lingam and installed in the present site on the southern bank of river Neela Bhagirathi. The location of the temple and steps leading to the river brings to the mind of a visitor the Banaras Temples on the bank of Ganges. Hence this temple is called "Kasiyil Pakuthi Kalpathy" (Half Banaras). Now this place is getting popular because of this annual chariot Festival. During this period the Kalpathi village will be crowded with thousands of devotees & visitors from different parts of the world. And the Chariot Festival is conducted based on vedic Tamil Brahmin Culture.

Kalpathi chariot Festival lasts for 10 days. It begins with Flag hoisting (Dwajarohanam) and ends with Rathasangamom. In the last day of the festival, decorated Temple chariots from different temples are pulled around by the devotes. In the first day, one chariot will be pulled by the devotees followed by two chariots on the second day and the last day of the festival three chariots.