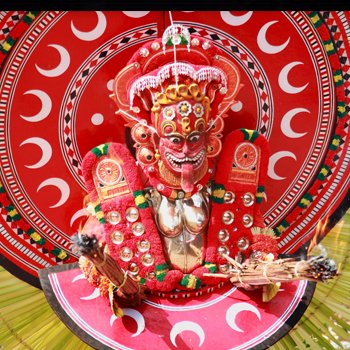 Thidambu Nirtham is a popular temple festival in Kannur & some parts of Kozhikode also. In Thidambu Nirtham Various stages of dances are involved and the main dancer is usually accompanied by group of artists , playing drums & couple of men holding traditional brass lamps. The Main features of Thidambu Nirtham is the dancer carrying the decorated image of the presiding deity (Thidambu).There would be a particular dress code for Thidambu Nirtham.

The dancers used to wear frilled skirt ,Silk Top , Ornaments & decorated head gear called Ushnipeetam. This art form is performed both inside & outside of the temple.