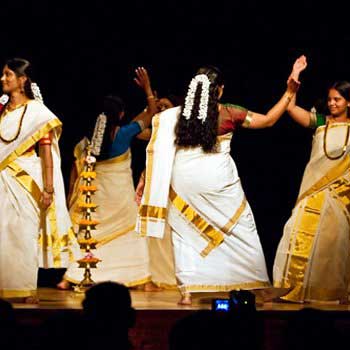 Celebrated as birthday of Lord Shiva.

In Kerala, Thiruvathirakali festival is being celebrated in the Malayalam month of Dhanu (December/January) as birthday of Lord Shiva. It is one of the most popular festivals celebrated with great joy and respect. Kerala people especially women observe fasting on this day as an offering to Lord Shiva. Married women & young girls take fasting for the welfare & prosperity of their family members. Young girls observe fasting to get an ideal partner in their life. There is a custom called \"Pathirappochoodal\" which means women adorn their hair with flowers and perform Thiruvathirakali. Oonjalattam is also an important item on this occasion.

Thiruvathirakali is a typical dance form of Kerala. Women perform this dance in the night of Thiruvathira. All women wear traditional Kerala Saree while playing Thiruvathirakali. In Kerala the festival Thiruvathira is most important among Nairs and Nampoothiri families. The womenfolk wake up early in the day and after bath they sing Thiruvathira songs, mostly related to Lord Shiva. At night time women while performing Thiruvathirakali or Kaikottykali, they stand in a circle around a lighted lamp and dance each step according to the rhythm of the songs they sing by clapping their hands.

Everyone perform Thiruvathirakalli as a dedication/offering to Lord Shiva & believes that Lord Shiva will shower his blessings. For married women, the first Thiruvathira after marriage is called as \"poothiruvathira\" and they celebrate the same in a grand manner.