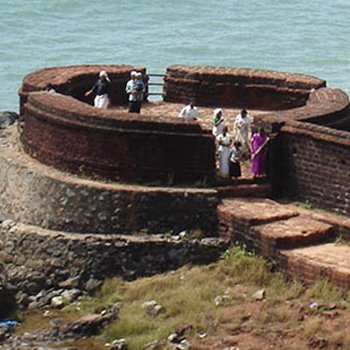 Bekal is a small town situated in Kanjangad, Kasaragod District of Kerala. Kasaragod is the north most district in Kerala. The fort is situated around 16Km from Kasaragod and it’s a place good beach also. The fort is having an age of 360 years and its constructed by Sivappa Nayaka of Bednore. The fort is facing to the sea and getting a breathtaking view of sea from the top. Bekal is also used by Tippu Sulthan as his important military camp at the time of his capturing in Malabar. After the death of Tippu Sulthan in Anglo – Mysore War the fort was under British East Indian Company. Now the Bekal fort is one of the main attraction in Northern Kerala and its preserved by Archeological Survey of India.

Inside the fort having a Children’s park, Hanuman Temple in the entrance. A beautiful walkway has been laid for visitors to explore the beauty of fort. Same as other forts in India, Bekal fort having underground passages which is used for military purposes and two of them was open for the public.