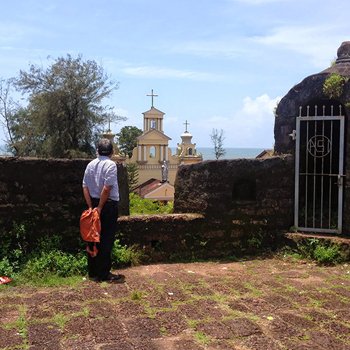 This fort is situated in Kannur District, one of the north most districts in Kerala. It is situated 22 Km south of Kannur, near to Municipal cricket stadium. The fort is constructed by British East India Company in the year of 1708. In 1683 the British East Indian Company started a godown and warehouse with the permission of Kolathiris, the rulers in Malabar Region (old name of Northern Kerala). Later they built a small fort on a small hill called as Tiruvellapadkunnu. The fort is originally built as a godown for pepper and cardamom and later it becomes the center of Military activities of British in Malabar. After Independence the fort houses many government offices and later it was handover to Department of Archeology as recognizing the historical importance.

One unique feature of the Tellicherry fort is the entrance is situated through a giant wall. Also inside the fort having a tunnel connected to the sea (now its closed) and a old light house to show the way for ships. There is two underground chambers is there to store Cardamom and Pepper.

The entree is free to the fort.