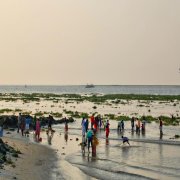 Fort Kochi beach is a beautiful beach which is situated in Ernakulam district in Kerala. Kochi is referred to as Queen of Arabian sea. It is one of the most famous tourist destinations in Kerala . It derives its name from Fort Emmanuel. Though the fort was destroyed years before but the name has been retained . Fort Kochi is a famous for its Beach and Chinese Fishing Nets. It is believed that these fishing nets called as Cheena Vala in Malayalam is introduced here by Chinese spice traders.

Each net is held by a cantilevered structure made of bamboo and teak requiring a minimum of 4 men to operate. If you are an adventure lover, you can lend a hand to pull these nets and these men will be happy to allow your participation. Fort Kochi means an ideal mix of cultural and historical moments . The rule of the British, Dutch and the Portuguese has largely influenced the life and culture of this place. Almost all are designed in the European style. The Fort is an example for the European architecture. It was a fishing village and is the first European township in India when the Portuguese settled here in the 15th century. The main attractions of the beach are Vasco da Gama Square and Lighthouse nearby. There is an open fish market near to the beach which anyone can buy and cook the fresh Seafood which catch from the sea . Various types of Fishes, Prawns , Lobster and Crabs are available here . This beach is crowded during Saturdays and Sundays with local peoples . You can watch ships and boats sailing in the sea and also can enjoy the beautiful sunset . There are some restaurants and hotels near by the beach .