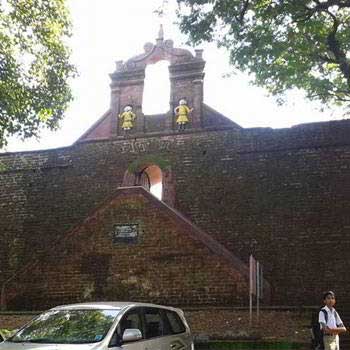 Kannur, also known by its Portuguese name Cannanore, is renowned for its native art form “Theyyam”, which is unlike any other dance form, a ritual performed in ancient shrines. Kannur is also famous for its serene and curved beaches and has some exotic backwater spots like Kavvayi which is clean and untouched. It was the military headquarters of the British in the west coast of India till the first half of the Nineteenth century. Asia’s largest and the worlds third largest Naval Academy is situated at Ezhimala, Kannur. There are some massive historical monuments like the Thalassery fort and the St. Angelo Fort, reminding us of the long forgotten European colonialism in India.

Summer - Summer season starts by March and lasts till May. As Kannur lies on the coastal area of Kerala, summer is too hot and humid. It is not the best season to visit Kannur as some people may find it harsh. Normally the temperature ranges from 31°c to 38°c.

Monsoon - This is also not a recommended period to visit Kannur, yet it is true that Kannur looks no less than beautiful even during the Monsoon showers. June to September Kannur experiences South West Monsoon and during October and November months it is North East Monsoon.

Winter - Possibly the best suitable time to pack your bags and head to Kannur. The temperature would be averaging 24°- 26°. The pleasant climate is inviting, and helps in easy movement in and around Kannur.

By Road - There are frequent Kerala State Bus services from all cities in Kerala as well as from some major cities in South India. The neighboring cities are Calicut [91 kms] to the South, Mangalore [148 kms] to the North and Mysore [180 kms] to the East.

By Air - The nearest International Airports are Calicut and Mangalore. There are regular flights from cities in India to these above mentioned airports. Though there are not many direct International flights to these destinations, you can connect these airports from any part of the World.

By Rail - Kannur is well connected by rails with regular trains from all the major cities in India passing through Kannur. The railway station is in the heart of the city and can be easily accessed.

Drive along the longest Drive-in Beach in India, sail across the virgin backwaters of Kavvayi, make a visit to some old European style forts, taste some famous Kannur special “Thalasseri Biriyani”, last but not the least, lose yourself and experience the ecstatic natural trance of transcendental Theyyam performance. For all these vivid experiences, visit the land of Kannur and enjoy some incredible time at the God’s own country.