This music concert is being held to pay homage to one of the greatest music trinity Thyagaraja in his Samadhi (memorial), remembering the day when the Saint attained Samadhi at Thiruvaiyaru, a village which is 13kms from Tanjore. Hundreds of renowned musicians render the five songs called as “Pancharathna Krithis” composed by the Veteran. It will be a divine experience to enjoy the concerts at His Samadhi. Though the concerts will be there on all the five days, the main rituals and celebrations will be on the concluding day, that is on 6th January 2018. 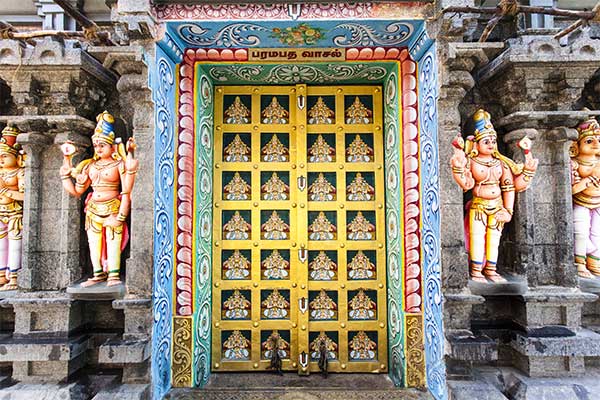 This is one of the most important Ekadasis. This festival is being celebrated for 20 long days and first day being 19th December 2017 and the Celebration goes up to 8th January 2018. First 10 days are being celebrated during the day and next 10 days are being celebrated during the night time. Vaikunta Ekadesi falls on the eleventh day of every lunar fortnight in traditional Hindu calendar (29 December 2017). Vaikunta Ekadesi festival is more elaborately celebrated by Vaishnavite. This is celebrated with great importance in Tirupati Balaji Temple & Sri Rangam Ranganathaswamy Temple. Apart from these temples, all the temples dedicated to Lord Vishnu and his incarnations in South India celebrate Vaikunta Ekadesi. The most important ritual on the day in temples is the opening of the Paradise door (Vaikunta Dwaram or Paramapada Vasal) in Vishnu Temples. This door is only opened on the Vaikunta Ekadesi day and devotees can pass through it. Symbolically the door leads to the Vaikunta - abode of Lord Vishnu.

The colorful festival celebrated across the country deserving a special mention is the Navarathri celebrated for nine days. The three incarnations of the Goddess Parvathi as Durga, Lakshmi and Saraswathi are worshipped during these nine days. Metal or wooden steps in odd numbers are bedecked and the idols of the God and Goddesses are arranged decoratively in the houses called Kolu. the arrangement starts with the grass and plants in the lowermost steps, then insects, small animals, domestic and wild animals, human beings placed in the bottom to top manner and Gods at the topmost row. This symbolizes the philosophy attaining the salvation through leading a pious life.

It is called as Vasantha Navarathri in North India, Kolu in Tamil Nadu and Dusserah in Andhra and Karnataka.

You will be mesmerized with the grandest durga poojas and celebrations in North India and the Kolu or the decorations in the temples of Tamil Nadu. In the world’s largest functioning temple complex Srirangam , you can enjoy the huge display of kolu in 35 different sets of steps. The celebration is going on in the Thousand Pillars Hall with daily concerts and other special programs to delight the worshippers. Come and be a part of the Navarathri celebrations which end 30th September 2017.

Doctor's conference is going to be held at Cochin from 18th January 2018 to 20th January 2018. Hotels in Cochin have been fully booked during this period. It is wise to check hotel availability before accepting new Hotel bookings on these dates at Cochin.

In view of Dasara festival, there have been certain restrictions imposed on the entry timings to Mysore Palace. On 21st September & 29th September, visiting hours to the Palace is from 01:30pm to 05:30pm.  On 30th September visitors will not be allowed to the Palace.