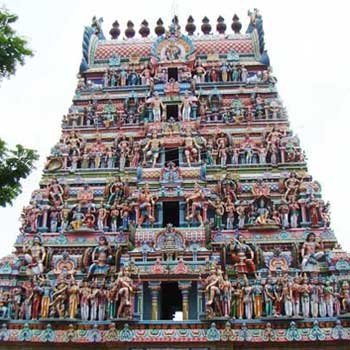 The Thiruvenkadu Swetharanyeswarar temple is a very ancient temple where the presiding deity is called Swetharanyewarar and His consort is called Brahma Vidhyambigai. It is believed that the God of Creation Lord Brahma, Lord Indhra and His White Elephant had visited this temple and worshipped the Deity. There is yet another shrine for Lord Agora Moorthy who is another incarnation of Lord Shiva. Agora Moorthy is believed to destroy the demon Padmasuran.

This temple is one of the Navagraha Temples where Lord Budhan is worshipped. Budhan is the symbol of intelligence, wisdom and peace. Devotees throng this temple throughout the year to worship Lord Budhan. They offer white colored clothes and cereals and pray to the God to protect them from the planetary transitions.

The temple Bull is seen with nine holes in its body correlating to the history that when the demon Surapadman came to fight with Lord Shiva here, the Bull interfered and got injured. Because of this, Lord Shiva became furious and took the incarnation of Agora Moorthy to destroy the demon. This temple is also called as Varanshi of South.

A ten days long festival called Chariot Festival  is celebrated during the Tamil month Thai which falls during Mid-January to Mid- February. The fifth day of this festival is so very significant that special poojas and rituals are carried out for Agora Moorthy.

By Rail:The nearest railway station is at Mayiladuthurai. You can prefer to travel by road from either Tanjore or Kumbakonam railheads.