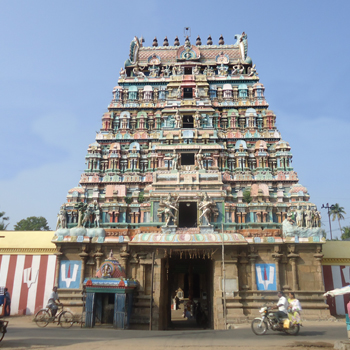 The eighth century temple built by the Medieval Cholas stands amidst the busy roads in the then capital city of the Chola Dynasty, Woraiyur, now as a part of the Tiruchirappalli City, Tamil Nadu. This is the second of the 108 Divya Desams which are the sacred places to be worshipped atleast once by every Vaishnavaite in his life time. The detailed descriptions about all the Divya Desams in the 6th century canon for Vaishnavism called Naalayira Dhivya Prabhandham which is a collection of Four Thousand poems glorifying the benevolence and mercy of Lord Vishnu. It is worth paying a visit to this 1200 years old temple which stands as a testimony for the architectural elegance of the Medieval Tamil Nadu. This is the “must to be” included place in the itinerary of South Indian Tour Packages.

Once there was a Chola King by name Nandha Cholan. Though he had everything in life, he was not blessed with a Heir. So he continuously placed his prayers with Lord Vishnu. Pleased with his prayers , Lord Vishnu appeared in his dream. He gave a boon of a girl child to the couple and also promised him that He will marry that girl at her right age. As per the God’s boon, the King found a little princess on a Lotus flower in a tank while he was busy hunting in a forest. As the King found the child on a lotus flower, she was christened as Kamalavalli. (Kamalam means Lotus). The girl grew with all charm and beauty as the Princess of the country. At right age, she fell in love with the Lord Renganatha Swamy who has an abode in Srirangam. The King made elaborate arrangements for the marriage of his daughter with Lord Renganathasamy and that auspicious day is celebrated even today as “Serthi Sevai Festival”. In commemoration of the marriage of his daughter, the King built this temple. As the Lord is in the form of a very beautiful bridegroom, he is affectionately called as “Azhagiya Manavala Perumal” and thus is the name of the temple.

The temple is built majorly using the Dravidian Style of Architecture and is said to exist from the Eighth Century. The presiding deity Azhagiya Manavala Perumal is in the form of a sitting posture. Outside the sanctum, there is a wonderful painting of Nammalvar, who is one of the twelve saints revered in Vaishnavism. The temple was rejuvenated with beautiful paintings in the mid 1800s. When you circumambulate the sanctum, you can enjoy the beautiful paintings portraying the Alwars and the different incarnations of Lord Vishnu. There are also paintings describing the law of dharma and justice which was enunciated by the Ikshavahu King Ambareesha. Few important portions from the Garuda Purana have also been pictorially represented on the temple walls. Garuda Purana is a sacred book of Hinduism written in the first millennium CE which adores mainly Lord Vishnu. It is said to have 19,000 verses originally. But, only 8000 verses have been retrieved so far. This mainly talks about the way in which the human beings should lead their lives. According to Hindu Mythology, there exists a punishment for even the smallest mistake committed by man. In Azhagiya Manavala Perumal Temple, the references from Garuda Purana are seen on the walls in the form of beautiful paintings. The major mistakes the mankind has been committing since ages and the punishements recommended in the Garuda Purana are pictorially represented on the walls.

One more interesting factor is that, the inscriptions on the expenses made by the authorities for building this temple. It is quite surprising to know that our forefathers have lived in a systematic manner in all aspects and the administration had been so transparent. The income-expenditure statements are found in the form of inscriptions around the sanctum which is visible even today.

The presiding deity is glorified in a total of twenty four hymns in the Nalaayira Dhivya Prabhandham and this is one of the very few temples where the Goddess has higher prominence than the Lord. Here, the first rights are always reserved for the Kamalavalli Thayar and during processions also the Goddess proceeds and the Lord follows Her. This is the very reason, the temple is called as “Nachiyar Koil” where Nachiyar is the pet name for girl children in the families of Vaishnavites.

This temple is significant for its most famous religious function called “Serthi Sevai”. This is an annual festival celebrated on the day of the Thiru Ayilyam star during the Tamil month Panguni. The festival idol of the Srirangam temple “Namperumal” is brought to this temple and both Namperumal and Kamalavalli thayar in gorgeous decorations are seated in the Serthi Hall in the temple premises. Special rituals are performed during this festival and after all the celebrations, Namperumal is taken back to the Srirangam Temple. The rituals carried out in this homecoming ceremony are attended by thousands of devotees both in the Srirangam as well as in the Nachiyar Koil.

Yet another significance of this temple is that Woraiyur is believed to be the birthplace of Thiruppanazhwar, one of the twelve alwars, the most revered saints in Sri Vaishnavism. He lived her between the 6th and 8th centuries. The annual festival is celebrated on account of his birthday in Srirangam Temple. The idol is taken from the temple to Srirangam where the celebrations begin with the Viswaroopa Dharshan of Lord Sri Renganatha Swamy. This is followed by honoring the saint Thiruppanazhwar with a garland, silk turbine (Parivattam), a shawl around the shoulders and handing over the sandalwood paste. These rituals are done with a belief that this would bring a smile on the Saint’s face. After this, the idol is taken to Thayar Shrine and Nammalvar Shrine with the priests reciting the hymns from Naalayira Dhivya Prabhandham. The entire procedure is called “Keezha Padi Honours” depicting how close the saint is to the heart of the Lord .

Daily rituals are conducted six times a day for the Lord Azhagiya Manavala Perumal. There are four steps in these rituals. Anointing , Decoration, offering of food, and waving of lamps. The temple musicians play the pipe instrument and the percussion instruments called Nagaswaram and Thavil respectively. The other rituals are the same as followed in other Vishnu temples.

Besides this, there are weekly, monthly and yearly festivals celebrated in this temple. Most important of them are, Dolothsavam, Vasanthothsavam and Navaratri. During the time of Serthi Sevai, a ten days festival is celebrated in this temple, with Araiyar Sevai, reciting of the verses in the Religious books called Vedhas, Tirumanjanam (special anointing) and processions.

As this temple is symbolizing the happy married life of couples, it is believed that the couples who come and worship here will lead a happy life together for many years. Come and enjoy the divinity of this sacred shrine and get the blessings of Lord Azhagiya Manavala Perumal.

Lord Azhagiya Manavala Perumal and His Consort can be worshipped between 5 AM to 12.30 PM and 4 PM to 8.30 PM.

By Air:The nearest airport is Trichy. The temple is at a distance of only 10 kms.

By Road:You can reach the temple from any part of the Trichy City at a distance of maximum Five kms.