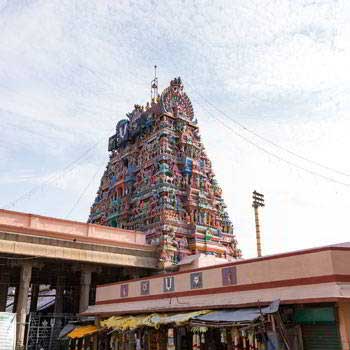 The place where even before 5000 years, the pilgrims on their way to Tirupati and Tirutani used to rest, the place which was covered by densely grown basil trees, the place where the Goddess Vedavalli Thayar was born in the guise of a female child on an Alli leaf where there is a temple which is more than 800 years old, standing as a testimony for the Hindu Epic Mahabaratham is the Parthasarathy Temple in Triplicane, Chennai which is very famous among the devotees following Vaishnavaite tradition. The name Triplicane is actually derived from “Tiruvallikeni” meaning the place surrounded by Alli flowers on waterbodies. This palce is likened to the Brindhavan of North India and is called as Brindharanya found mentioned in the History. This temple is the 61st sacred shrine among the 108 Divya Desams found in the holy canon of Vaishnava tradition “Naalayira Divya Prabhandham”. The saints of Vaishnavism called Alwars have glorified the benevolence and power of Lord Parthasarathy in their songs praising Him. For anyone This is a temple never to be missed in the itinerary of South Indian  Tour Packages.

The temple has a very long history dating back to 8th Century AD. This is the only temple where Lord Vishnu is worshipped in the form of a Cahrioteer. He played the role of a Charioteer for the Pandava Prince Arjuna during the Kurukshetra War which lasted for Eighteen Days. This has been described at length in the epic Mahabaratham. It is believed that Lord Vishnu took the form of Krishna and guided Arjuna to win in the war. During these eighteen days, Lord Krishna preached the Bagavat Geetha which is the ultimate guide for leading a life of morale and ethics. Those who follow the guidelines of Bagavat Geetha during their lifetime are said to be relieved from the cycles of birth and death and attain salvation at the feet of Lord Krishna.

The temple was actually built in the 8th Century AD by the Pallava Kings. And later on, the temple enjoyed a huge expansion during the reign of Vijayanagara Kings. The temple got flourished with the endowments and offerings by the Kings of Vijayanagara Dynasty and became prominent place of worship among the Vaishnava Temples. The specialty of the temple is that the temple houses the five incarnations of Lord Vishnu namely, Narasimha, Rama, Gajendra Varadharaja, Ranganatha and Krishna. This temple is one of the oldest structures in Chennai having followed the South Indian Temple Architecture.

Parthasarathy temple is unique in another aspect. This is the only temple where the seven saints called Saptha Rishis by name Brigu, Manchi, Athri, Markandeya, Sumathi, Saptharoma and Jabali have worshipped the presiding deity Lord Venkatakrishna Swamy called as GEETHACHARYA. The sanctum sanctorum in the temple has the deities Lord Venkatakrishna Swamy, Sri Rukmani Thayar, Satyaka, Sri Balarama, Prathyumnan and Anirudhan. They are called as Panchaveeral who fought for the victory of Pandavas.

Besides the presiding deity, as followed in the other Hindu temples, there is a separate deity called Lord Parthasarathy who is taken out on different vehicles during festival days and on auspicious days. The deity goes around in a procession either inside the temple or on the four streets called Maada Veethis around the temple. Even today you can witness the mark on the forehead of Lord Parthasarathy which is an injury caused by the arrow of Bhishma during the Krukshetra War. There are other sub shrines in the temple complex. The deities housed in these sub shrines are, Vedhavalli Thayar, Rangantha, Rama, Gajendhra Varadha,Narasimha, Andal, Hanuman, Alwars, Ramanujar, Manavala Mamunigal and Vedhanthachariyar. The temple is such a big complex tower that there are eight towers called Gopurams. The two huge eastern and western towers are the two main gateways for the temple. The tower for the Lord Parthasarathy is called Anantha Vimanam. The other towers are for Lord Ranganathar, Lord Rama, Vedhavalli Thayar, Lord Narasimha and the only Lady Saint in Vaishnavism, Sri Andal.

There are festivals celebrated round the year in this temple. For every month in Tamil, there is a specific festival celebrated. This is the only temple where there are two Brahmothsavams celebrated, one for Lord Parthasarathy and one for Lord Narasimha present here with the name Azhagiya Singar. The other festivals which is attended by huge number of devotees are, Varadharajar Uthsavam, Nammalvar Uthsavam, Vasanthothsavam, Theppothsavam(Float Festival) and Spring Festival. The other festivals of importance are those conducted for Ramanuja, Manavala Mamunigal,Alwars and Acharyas. The festival famous across the Vaishnavites is Vaikunta Ekadasi celebrated between December and January. It is believed that one who is able to see the God taken out of the Paramapadha Vaasal meaning the Doors to Heaven will be able to attain the Lord’s feet on the Day of Judgement. So, this festival is celebrated in such a grand manner attracting lakhs of worshippers towards Lord Parthasarathy.

Come and enjoy the rich tradition and culture of our country intertwined with the devotion towards God.