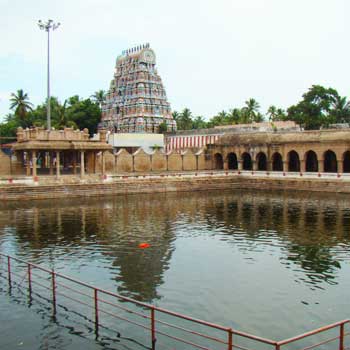 The Temple has been in existence from time immemorial. The presiding deity is a self-manifested one . The temple has been built by the Cholas and the renovations and expansions have been done during the reigns of different rulers over the centuries. Lord Shiva is worshipped as the presiding deity here based on the Saivaite philosophy that Lord Shiva is pervading everywhere and Lord Raghu is worshipped primarily.

Once there was a saint Suseelar, whose son was attacked by the Celestial serpent Dakkagan. Saint Suseelar cursed him to take birth as a human being on earth. After his hard penance towards Lord Shiva, he worshipped Him in the form of an idol Lingam at Thirunageshwaram and got relieved from His curse. As lord Raghu himself got his curse relieved, this place became so sacred with the Naganatha Swamy as the presiding deity and the temple has become very popular among the devotees across the country.

This temple is one of the Navagraha Temples where Lord Raghu is worshipped. Raghu is the symbol of wealth and prosperity. Devotees throng this temple throughout the year to worship Lord Raghu. They offer black colored clothes and cereals and pray to the God to protect them from the planetary transitions.

In this temple, Lord Raghu is present in the form of Human being with his two consorts. He will always make his devotees flourish once he transits into their zodiac sign. Whenever milk is anointed to the idol, the milk turns into blue color which happens even today. Though Lord Shiva is present here as the presiding deity, Lord Raghu is worshipped first and then only the devotees visit the sanctum to get blessings from Lord Naganathaswamy and His consort Girigujambigai with Goddess Lakshmi and Saraswathi in the same sanctum.

Transit day of Lord Raghu from one Zodiac sign to the other which happens every one and a half years is celebrated with huge number of devotees worshipping Him to protect them from any ill effects. Mahasivaratri, Margazhi Thiruvadhirai, Panguni Uthiram are the major festivals celebrated in this temple besides the regular poojas and rituals. Special poojas are conducted during Raahu Kaalam every Sunday. The deity is taken out on procession only during Shivarathri and Transition from one sign to the other.

By RoadThirunageshwaram is at a distance of 6 km to the east of Kumbakonam.

By RailThe nearest railway station is at Kumbakonam. You can prefer to travel by road from either Tanjore  or Kumbakonam

By AirThe nearest airport is at Trichy. From there, you can reach the temple in less than Two hours.

Nearby Tourist AttractionsTemples in Trichy ,Tanjore and Kumbakonam.

Special note (Timings):Special poojas and anointing ceremony will be held every Sunday between 4.30 pm to 6 pm during Raahukaalam.