Telangana is known for its historic monuments, representing the culture, tradition and historic heritage rooted strongly since the ancient times. The impact of the architectural elegance influenced by the various dynasties who had parts of Telangana as the prominent ruling regions are best exhibited in the monuments dotted across the state.

Charminar is the most popular and most frequented monument in Telangana and the icon of Hyderabad city. Marvel the Mughal architecture in the minarets and mosque of Charminar and take back some beautiful bangles from the number of shops around Charminar. Visit Golkonda Fort, an enduring architecture built during the Qutb Shahi dynasty. Medak fort, Alampur temples are worthy to be visited.

The thousand pillar temple and Ramappa temple are the classic examples of the 11th century Kakatiyan dynasty, the period during which the art and architecture were at their peak. The intricately designed stone pillars, precincts and halls exhibit the best of architectures to be explored and enjoyed. One more popular monument to be added to the list is the Warangal fort and gateways. The gorgeously ornamented gateways were once acclaimed as Kakatiya Kala Thoranam, depicting the elegant architecture of the Kakatiya dynasty. Though in the ruined condition, the remains of the Warangal fort and gateways are still the most admired master pieces. You can also find some wall slabs and panel exhibited in the museum and an incomplete mosque initiated by the Bahmani Sultanate. 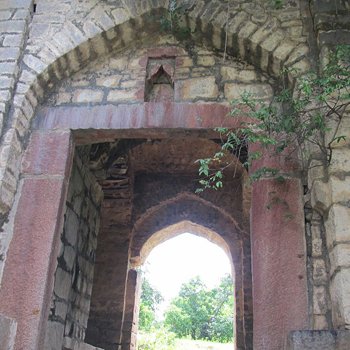 Behold the masterpiece of Kakatiyas architecture in the Medak Fort. This colossal built though hoary, never miss to impress the beholders.