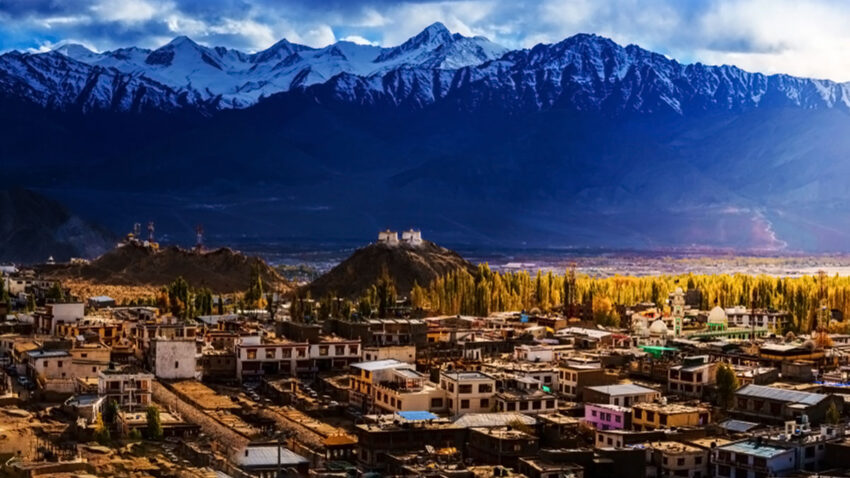 A dream destination for all those who love to travel, Ladakh is a beautiful amalgam of extraordinary scenic beauty, culture, spirituality, adventure, and great hospitality. It’s a land like no other that has long impressed travelers with its surreal landscapes, towering Himalayas, and breathtaking climate. Ladakh is a real feast for the senses, with pictures and videos simply doing no justice to the scenic bliss and the tranquil vibe that the place offers. You have to go and experience it for yourself to truly understand the real Ladakh. This tiny slice of paradise has something for everyone and surprises all with many unusual places that can’t be found elsewhere.

Take a look at the 10 Best Places to Visit in Ladakh that deserve a place in every traveler’s diary:

The 7th century Royal Leh Palace, perched on the top of the deserted Tsemo Hill, is one of the best places to visit in Ladakh. Though, almost in ruins now, the Royal Leh Palace still stands in pride as a testimony to Ladakh’s splendid heritage.

The intriguing medieval Tibetan architecture is an additional perk of visiting this palace. The dun-coloured nine-storey palace now houses a museum and a prayer room, while the highlight is the breathtaking panoramic view of Leh and the surrounding Zanskar mountain from the rooftop. The interiors of Royal Leh Palace are embellished with ancient mural paintings that speak of its golden bygone era.

Shanti Stupa is yet another awe-inspiring place you should not miss while visiting Ladakh. What makes this white domed shaped Shanti Stupa worth visiting is that it is a religious place for the Buddhists that holds the relics of Lord Buddha, consecrated by the 14th Dalai Lama.

The walls of Shanti Stupa have gilt panels that depict the life of Lord Buddha. The view the place offers of the whole of Leh and the nearby Changspa village is just mind-blowing. Shanti Stupa is a perfect getaway for those seeking peace from offering prayers to God and for those who wish to get mesmerized by nature’s wondrous beauty.

Pangong Tso Lake is no doubt one of the most popular tourist attractions in Ladakh. It is so famous among tourists as Ladakh Lake, the picturesque spot where the Bollywood movie “3 Idiots” was shot.

Blessed with breathtaking surroundings, it is one of Asia’s largest saltwater lakes. A unique feature of the Pangong Tso Lake is that it changes colours from azure to light blue to green and grey throughout the year or even the day. This extraordinary Lake turns rock solid and becomes the venue of ice skating festival during the winter season. Furthermore, the peace and tranquility of the Lake make you want to stay for long.

Thiksey Monastery is considered to be the largest and one of the most beautiful Buddhist monasteries in all of Ladakh. This 12-storey complex is noted for its amazing architecture and houses several stupas, statues, and many items of Buddhist art and artefacts.

Snuggled between the cold deserts of Leh and Ladakh, its mesmerizing location offers jaw-dropping panoramic views with the Zanskar mountain range in the backdrop. The main attraction of Thiksey Monastery is the Maitreya Temple which houses a 15-metre tall Maitreya Buddha statue. It is the largest such statue in Ladakh and covers two-storeys of the building.

Khardung-la Pass is quite popular among adventure and motorbiking enthusiasts. It is one of the highest motorable roads in the world placed at an elevation of 5359 m above the sea level and popularly known as the ‘Gateway to Nubra and Shyok Valleys’.

Himalayans and Cruisers are considered to be the best means to travel Khardung-la Pass, to experience the rugged beauty of the journey. Khardung-la Pass is also used by the Indian Army to carry supplies to the Siachen Glacier. From the top the views are incredible.

Undoubtedly one of the best places to visit in Ladakh, Zanskar Valley is known for its pristine and picturesque landscape with wonderful Tibetan-style monasteries, surrounded by snow-capped mountainous peaks. The sparkling river with azure blue waters is a bewitching sight that adds to the beauty of the Valley.

Zanskar Valley is often frequented by adventure enthusiasts for trekking and river rafting. The easiest way to reach Zanskar Valley is from Kargil through Suru Valley. But due to heavy rainfall, it is cut off from the rest of the world for over 9 months of the year. So, during the winter months of December to February, the only way of reaching Zanskar Valley is to undertake the challenging Chadar Trek.

Hailed as the “Snow Leopard Capital of India”, Ladakh’s Hemis National Park is best known for sheltering the highest density of snow leopards in the world. Besides, it is home to 73 bird species and 16 mammal species as per records.

What makes Hemis National Park exceptional is the fact that apart from inhabiting the famed snow leopard, it is the only national park in the northern regions of the Himalayas. It was established in 1981 and offers a great place to spot snow leopards.

The paradisiacal Nubra Valley is famed for its white sand deserts and double-humped camels (Bactrian camels). The scenic slopes of the Karakoram range along with the confluence of Shyok and Siachen rivers make Nubra valley an exquisite voyage.

It’s an awesome place to admire nature’s bewitching sceneries and to indulge in Bactrian camel rides. The peacefulness of this enchanting valley is so refreshing to be experienced.

Embark on the 6 days Chadar Trek to encounter a true spine-chilling experience. Also known as The Frozen River Expedition, it is one of the most unique and challenging treks in India.

What makes the Chadar Trek so unique is the fact that the trek is along the frozen Zanskar River that freezes in the winter season. It usually takes place during the latter part of January till the end of February or even lasts till the first week of March, depending on the weather. The thick layer of ice that the Zanskar River forms resemble a white blanket which in the local language is called Chadar. Hence the trek along the frozen Zanskar River is named as the Chadar Trek.

The Magnetic Hill is actually a gravity hill, known for its unique forces that supposedly operate contrary to the law of gravity.

You can see here vehicles defying the force of gravity and moving upwards on the hill when parked at the marked location. However, it is nothing but an optical illusion but surely worth experiencing. This gravity-defying Magnetic Hill is perched at an altitude of 14,000 feet above sea level, right on the Leh-Kargil-Srinagar national highway.

If you haven’t visited Ladakh yet, just drop everything and go now to treat yourself to an unforgettable vacation of a lifetime!

Book a trip to India with South Tourism and make sure to add these Best Places to Visit in Ladakh to your travel bucket list for this summer!

Also, let us know in the comments below any other ‘Places in Ladakh’ that you know can be the best choice to visit other than our pick.