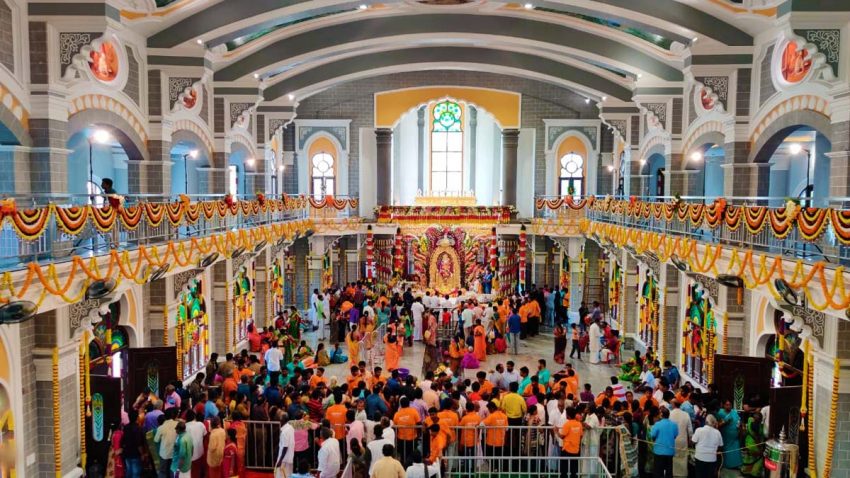 A visit to South India is incomplete without exploring its magnificent temples, marked as the finest temple constructions ever to be made that are a perfect mix of art, architecture and divinity. Among all other states in South India, the state of Tamil Nadu dominates with as many temples that display some of India’s greatest temple architecture.

With acclaimed divinity through the famous Dravidian Temples, Tiruchirappalli (Trichy) stands as a major hub of pilgrims and tourists in Tamil Nadu. The spectacular Rock Fort Temple forming the landmark of the city, the stunning Thayumanaswamy Temple with 100-pillar hall and gold-covered Vimana, the divine Jambukeshwarar Temple that represents one of five great elements (Panchabootha), water, the renowned Sri Ranganathaswamy Temple (Srirangam) deemed as one of the largest temple complexes in India, and many more, Trichy has a wealth of amazing temples.

Adding to the pride of the city and the state, Trichy now has one of the biggest temples in South India dedicated to Shirdi Sai Baba, a revered Indian saint of the 19th century. Located in a small hamlet called Akkaraipatti in Trichy, the shrine is named as Akkaraipatti Sai Baba Temple and is nicknamed as the ‘Shirdi of South India’.

Read on to know more about Akkaraipatti Sai Baba Temple – the ‘Shirdi of South India’:

The Akkaraipatti Shirdi Sai Baba Temple was planned, designed and constructed by the Sree Sai Karpagaviruksha Trust with the Chairman of NTC Group of Companies, K Chandramohan, helming as the Managing Trustee. It is spiritually uplifting to note that Shirdi Sai Baba appeared in the dreams of K Chandramohan and advised him to construct a temple for Him in Akkaraipatti.

The construction of the temple was started at the end of 2015 and was completed by the end of 2019. It is built as a three-floored structure with its basement extending up to 12,000 sq. ft. The basement of the shrine houses a 5-feet high Shiva Linga and is mainly used for yoga and meditation practices. The ground floor is so spacious that it covers 13,500 sq. ft and has a magnanimous idol of the saint which is made up of 2 tons of marble. The first floor of the shrine has 6,500 sq. ft space from where the devotees can watch the pujas and religious events happening on the ground floor.

The Temple complex has four sub-shrines of Lord Ganesha and other deities and the walls of the temple are embellished with the mural paintings of the deities. Variety of frescoes demonstrating the manifestation of Sai Baba is painted on the interior false ceiling of the temple which is simply stunning. The whole temple complex looks no less than an architectural splendour adorned with traditional ornamental works. The exterior domes enhanced with gold foiled sheets catch the sight of every onlooker. The 20 chhatris that surround the main temple complex adds elegance to this architectural marvel. Another highlight is that to assist aged persons, two ramps are placed in the ground floor of the temple.

Tiruchirappalli is a major tourist hub of Tamil Nadu that possess a blend of glorious past, picturesque settings, and amazing temples. Some of the popular tourist attractions in Tiruchirappalli (Trichy) are:

Tiruchirappalli (Trichy) International Airport is the nearest airport to Akkaraipatti Sai Baba Temple which is about 27.9 Km away. From there you can hire a bus or taxi to reach the Temple.

Tiruchirappalli is well-linked to other major cities of the country via rail. Tiruchirappalli Junction Railway Station is the nearest railway station to Akkaraipatti Sai Baba Temple which is about 23.5 Km away.

Tiruchirappalli is well-linked to other major cities of the country via road. The Akkaraipatti Sai Baba Temple is situated about 4 Km from the Samayapuram toll plaza on the Chennai-Trichy national highway. Hence, it is easy to reach the temple via road.

The magnificent temple with great architecture, Akkaraipatti Sai Baba Temple is an ideal place for devotion as well as to admire the fine craftsmanship. A must-visit place on your next visit to Tamil Nadu.

Feel free to visit: www.southtourism.in and get the best deals for your itineraries.