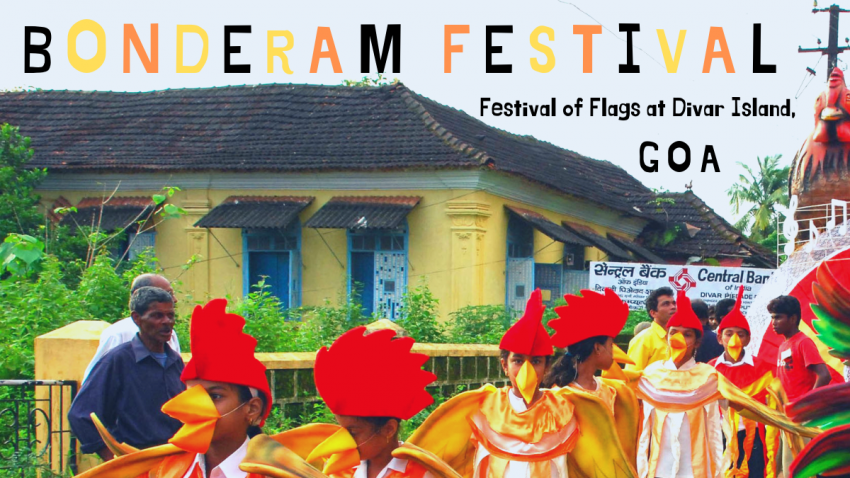 The Elysian blend of Indian and Portuguese culture and architecture is still evident in the loner’s paradise – Goa. Churches and beaches enriched by sunlight; parties and happening nightlife embraced by moonlight, the ingredients of this pristine destination is infinite. Still, a gargantuan feast for the traveling population. The scrumptious seafood of the capital city, Panjim (Panaji), cafes of North Goa, and solitude of South Goa create a sumptuous travel experience. While Anjuna and Arambol Beach attract the Westerners, Baga and Calangute Beach draw in the Asian crowd. But, the hidden hamlets and unexplored territories of Goa bestow an array of opportunities for the everyday traveler to become a novel destination hunter. Divar Island is one to explore during August for its hues and BONDERAM, the festival of flags. This is one among the places in Goa still holding on to the touch of rural Goa. A quick read about Bonderam Festival at Divar Island just 12 km away from the capital city – Panaji and its surrounding wonders.

The ideal destination for solo travelers, backpackers, bleisure travelers, and every living soul that prioritizes peace in travel. Languid beaches, lined-up coconut palms, six-pack surfers, architecture combining the efforts of Mughals, Hindus, and Portuguese designers, and voracious readers on vacation pretty much fill up the gala vibes of Goa. The Tropical climate, white sand beaches, and coconut trees sum up why Goa is called “The Pearl of the Orient”.

The entry to Goa is a benchmark experience on the Konkan Coastal Railways. One of the best train travel experiences in India due to the presence of picturesque Dudhsagar Falls, sleepy villages, and luscious terrains.

Less than 30 km away from Divar Island, Baga Beach is a happening destination in North Goa. The place is known for its vibrant shacks with loud trippy music and extensive nightlife. A terra for the tattoo lovers.

Calangute Beach is a commercial center for parasailing, water surfing, banana ride, and jet-skiing. You’ll find interesting cafes here to slow down your travel with a beautiful evening read. The State’s niche nightclubs and best beer joints are located in this typical Goa terrain. It is just 23 km away from Divar Island.

Seek tranquility amidst bustling beaches of Goa in its relaxing resorts. Particularly, traveling down South Goa is perfect to kindle the seekings of your soul. The colonial era-styled bungalows, historic forts, and intricately designed churches are accessible from this fertile terrain of Goa. Be it your maiden honeymoon trip, a rejuvenating yoga tour, or a soulful solo trip, the Ocean-views and sights of Baroque-Portuguese style reward you a pleasurable stay. Palolem Beach is less than 85 km away from Divar Island.

The brimming white color of Our Lady of Immaculate Conception Church seems lively and new. It stands true to its immaculate meter, holding on to antiquity and the archaic aura. The ancient bell taken out from the Augustinian ruins of the Church of Our Lady of Grace is present in this church. The second-largest of its kind in Goa, less than 12 km away from the tranquil Divar Isle.

To commemorate the emphatic win over a Muslim empire by Alfonsa De Albuquerque, Se Cathedral was erected. The capture of Goa in 1510 happened shortly. Since the feast of Saint Catherine happened on the same victorious day, the church was dedicated to her. The highly revered present by Pope Pius XII – “The Golden Rose” and the largest bell in Goa, “The Golden Bell” enhance the sacredness of Se Cathedral, less than 5 km away from Divar Island.

The spotlight of this write-up is lit up on the banks of Mandovi River, a terra once backed up highly by the Hindu population. Owing to extended Portuguese invasion and rumors regarding the outbreak of Plague Epidemic, the then mass exodus contributes to the lingering silence of Divar Islands. However, Divar Isle is blazingly lit with different shades and tableaux during the fourth Saturday of every August. A carnival atmosphere spreads in the vicinity of Goa. This quaint place, 15 km from Panaji celebrates Bonderam Festival or The Festival of Flags to remember a brave act. The Potekar Festival is similar to the Halloween festival. While the ruins of the Kadamba Dynasty, melancholic trails of the malar village, and dark past of the Naroa hamlet say a lot about the invasions and bloodshed of the past. Ferry service providers are the only ray of hope to reach this veiled enchantress.

Celebrated on the fourth Saturday of every August, Bonderam Festival is not only a cultural event but an occasion to educate the world about humanity, wisdom, and awareness using Tableaux Parades, Flags and themes accompanied processions, brass bands, and energetic minds. The verandahs and balconies of Divar Island will be filled with jubilation and joy, introspecting the westernized concepts. Banners to make youngsters get out of drug abuse, posters supporting freedom of women, themes about women empowerment and powerful statements against sexual harassment and rape elevate this cultural event to an international carnival. Travelers gather and dance along with the little kids for Goan-Portuguese numbers. Each section with a different theme entertain the spectators with their own ideas and tableaux. The beauty of this carnival is in the unity of people, coming forward without unwanted thoughts of caste, creed, nationality, and color. But why is this festival is celebrated? During the era of Portuguese administration, Divar Village saw constant land disputes between “Sao Mathias” and “Piedade” troops. To end this Portuguese had planted flags, forming the base of demarcation. Intolerant and angered people joined threw stones and hard objects at the flags and knocked down them. Today, this is a parody event where people throw berries and display “Fotash”, a toy stick made out of bamboo. Slowly, when twilight arrives, jazz dance numbers and DJ parties emerge and grows louder till late night. Probably, one of the best event in Goa where FENI is brewed and shared with love and happiness. More of these happening carnivals will make Goa hold on to its original charm.

For witnessing cultural events and grand carnivals of South India discuss with South Tourism for your beautiful days. The 20-year-long legacy has a huge part to play with our esteemed presence in making travelers enjoy every single bit of any culture. Through our extended support and personalization, we make the impossible activities possible effortlessly.