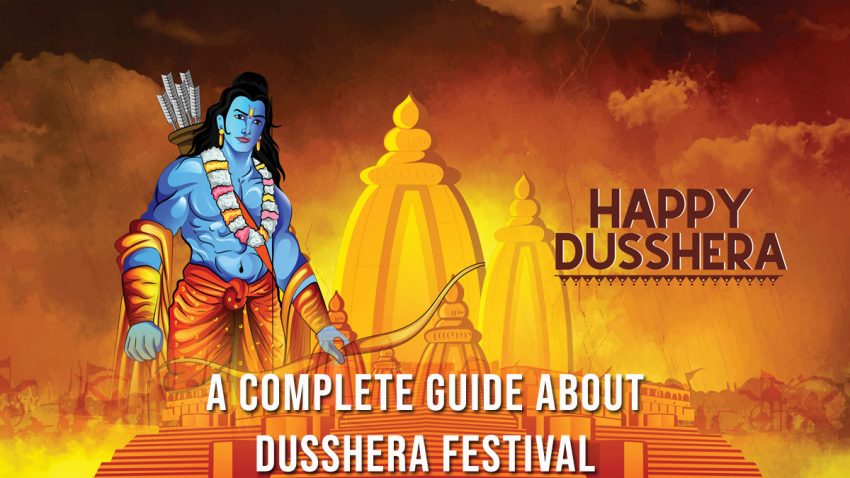 Venue: All over India.

Dasara – The Festival to Celebrate the Triumph of Good Over Evil.

The festival season brings with them a wave of happiness and cheerfulness, to celebrate your life and rejoice with your loved ones, leaving behind all worries in the festive spirit. India possesses multifarious festivals, too many to be counted, that sparkles the country with its vibrant and lively celebrations. More than the joyous celebrations, the festivals of India reflects the abundant cultural heritage of the country. Dasara Festival that signifies the triumph of good over evil is one among the much-celebrated festivals of India. This year the Dasara Festival will be celebrated on October 8, 2019.

Observed on the tenth day of Navratri, Dasara Festival is celebrated with great zeal and enthusiasm to commemorate the victory of Lord Rama over the demon king Ravana. It is the pristine occasion to regard with respect the virtues of Lord Rama who is believed to be an incarnation of Lord Vishnu. Dasara Festival is popular as Vijayadashami in some parts of India which also marks the day Goddess Durga killed Mahishasura, the demon king. This Festival also signifies the end of Durga Pooja celebrations with the solemn immersion of the idol of Goddess Durga in the water bodies.

Dasara Festival is known by different names in different parts of the country like Dasha-hara, Dussehra, Durgotsav and Vijayadashami. Two Hindi words, ‘Dus’ meaning ten and ‘Hara’ meaning annihilated, are combined to form the word Dasara which signifies the day when the ten evil faces (ten faced Ravana) was destroyed (by Lord Rama). So, to mark this event, huge effigies of Ravana are burnt on the Dasara Festival.

A lot of mythological legends are associated with Dasara Festival.

The most prominent legend behind Dasara Festival is regarding Lord Rama, the eighth incarnation of Lord Vishnu. Rama was sent to exile for 14 years to Dandaka forest along with his wife and beloved brother Laxman by his stepmother, during which he faced many trials and tribulations. Especially, when his wife Sita was abducted by the demon king Ravana, who took her as a captive to Lanka. Rama and his brother Laxman fought a battle against Ravana in Lanka which continued for ten days. Lord Hanuman and an enormous army of monkeys were also there to help Rama and Laxman in the battle. On the tenth day, Lord Rama defeated the ten-headed demon king Ravana and killed him to rescue his wife. Since then, to commemorate this event that signifies the victory of good over evil, the Dasara Festival is celebrated.

As per the legend, there lived a ferocious demon king named Mahishasura who was an ardent worshipper of Lord Brahma. Being pleased with the long penance of Mahishasura, Brahma granted him with his wish of ‘immortality’, that he should not be killed by a “man or animal” on the face of Earth. Mahishasura was so powerful that he attacked Trilok (the three worlds of earth, heaven and hell) and even the God’s were unable to defeat him due to Lord Brahma’s boon. So, they decided to combine all their powers together to give birth to Goddess Durga. The Goddess fought with the vicious Mahishasura for over a period of nine days. Finally, on the tenth day, Goddess Durga stabbed the demon king with her trident and that was the end of him. And this sacred day is celebrated as Dasara and as Vijayadashami throughout India.

With reference to the great epic Mahabharata, there is another popular legend regarding the origin of Dasara Festival. Legends say that when Pandavas were defeated by the Kauravas in gambling, they were punished by the winners with 12 years of banishment and one year of living in disguise. Pandavas concealed themselves from all their divine and powerful weapons and went to exile after hiding their weapons under a Shami tree, located near their residence. As soon as they returned from exile, they found their weapons, hid under the Shami tree and worshipped the tree and their sacred weapons. This event is said to have happened on the Dashami day and hence observed as the Vijayadashami since Pandavas were victorious in completing their exile. Since then, people used to hug each other under the Shami tree and exchange its leaves on Dasara.

This legend is about Kautsa, the son of a Brahmin named Devdatta. He was tested by his Guru, Sage Vararantu who asked him for 140 million coins as Gurudakshina (a voluntary fee offered to a teacher by a student in ancient India). At first, Kautsa went to King Raghu of Ayodhya for help but was disappointed as the King asked him for three days’ time. He then went to Lord Indra and asked him for 140 million coins to give an offering to his Guru. Lord Indra, who in turn asked Kuber, the treasurer of the deities to shower gold coins on the Shanu and Aapti trees situated in the city of Ayodhya. Kautsa fulfilled his promise to his Guru by giving him 140 million coins and distributed the rest to the poor and needy of Ayodhya. It is believed that this event took place on the day of Dasara. And the people of Ayodhya still observe the ritual of presenting leaves of Aapti trees to each other on Dasara as a sign of prosperity.

Where to go to witness the grandeur of Dasara Festival:

Grand celebrations are organized in every part of India during the Dasara Festival wherein people gather in streets, dancing and rejoicing in the victory of good over evil, taking part in the processions to immerse the idol of Goddess Durga and flaming the effigies of Ravana. As the Dasara Festival is known by different names and has different legends, its celebrations also differ from one region to another.

Be there where it’s all happening:

Mysore is said to have got its name from the slaying of demon Mahishasura by Goddess Chamundeshwari (another name of Durga) and hence it celebrates Dasara Festival on a grand scale over 10 days that flashes the royal heritage of the city. The view of the Mysore Palace illuminated by a 100,000 bulbs looks so stunning and makes way for a picture-perfect snap. The awe-inspiring parade of lavishly decorated elephants and guards sitting on horseback, escort the idol of Goddess Chamundeshwari through the city which is a fascinating sight to watch.

Ramlila performance, enacting the scenes from the great Hindu epic Ramayana is the main highlight of Dasara celebrations in Delhi. The story of Lord Rama and his ferocious battle with the demon king Ravana are amazingly demonstrated in the show. With the burning of effigies of Ravana, the celebrations come to an end. Another highlight is the spectacular display of fireworks. The best place to watch this is at Ramlila Maidan in Delhi.

The Ramlila performance of Varanasi during the Dasara festival is very famous. The main speciality is that it is the World’s oldest Ramlila performance that has been running here for nearly 200 years. It is conducted every year at Varanasi for over a month and the Ramnagar Fort acts as the venue for this performance.

During the Dasara festival, the effigies of the clan of Ravana, made by the locals are paraded through the streets of Almora in Uttarakhand in the company of music bands. The celebrations at Almora are so special that it is the only place in India where 33 effigies of the Ravana clan is burnt during Dasara. Hundreds and thousands of locals, as well as tourists from various parts of the world, flock here every year to watch this spectacular event.

Kota in Rajasthan comes alive with grand and exciting fairs (Mela) during the Dasara Festival which includes cultural programs, exhibitions of handicrafts, spectacular display of fireworks and an umpteen food stalls that sells delicious cuisines. The villagers offer prayer to Lord Rama and celebrate his victory over the demon Ravana by burning the skyscraping effigies of Ravana. Another interesting aspect of Dasara celebrations at Kota is the spellbinding procession featuring decorated elephants, camels, horses, folk dancers from the Royal Palace to the fair-ground.

Dasara Celebrations at Kullu Valley in Himachal Pradesh is entirely different from the rest of the country. During the festival, Goddess Hadimba is carried out in procession in beautiful chariots and later joins with the idol of Lord Raghunath (Lord Ram, the presiding deity). Hundreds of local deities and demigods from neighbouring villages are brought to participate in this procession to Dhalpur Maidan where they stay until the festival culminates. The highlight is that Kullu Dasara is the only festivity in India where such a large number of deities are assembled at one place. Unlike other places that celebrate Dasara by burning the effigies of Ravana, Kulu Dasara stands unique by burning a pile of thorn bushes and dry leaves to depict Lankadahan (the burning of Lanka).

The Kulasekarapattinam in the state of Tamil Nadu celebrates Dasara in the most unique way. The celebrations take place around the 300-year-old Mutharamman temple, dedicated to ferocious Goddess Kali. Dasara Festival, also called here as Kulasai Festival is a fusion of dance and music and the devotees dress up as god’s and goddesses sway to the pulsating beats of thara thappattam, holding fire bearing clay pots in their hands for hours throughout the night. The festival comes to an end with a theatrical slaying of demon Mahishasura by the Goddess on the beach.

Dasara Festival is celebrated in a distinct manner in Chennai. During the festive time, the houses will be adorned with kolus(simple tier-wise arrangement of idols of gods and goddesses on wooden platforms). These tableaux are known as Bommai Kolu and are arranged in such a way to represent the story of the battle of Goddess Durga with the demon Mahishasura, as well as stories from Ramayana and Mahabharata.

Mark your calendar and join us to witness the joyful celebrations of the Dasara Festival.