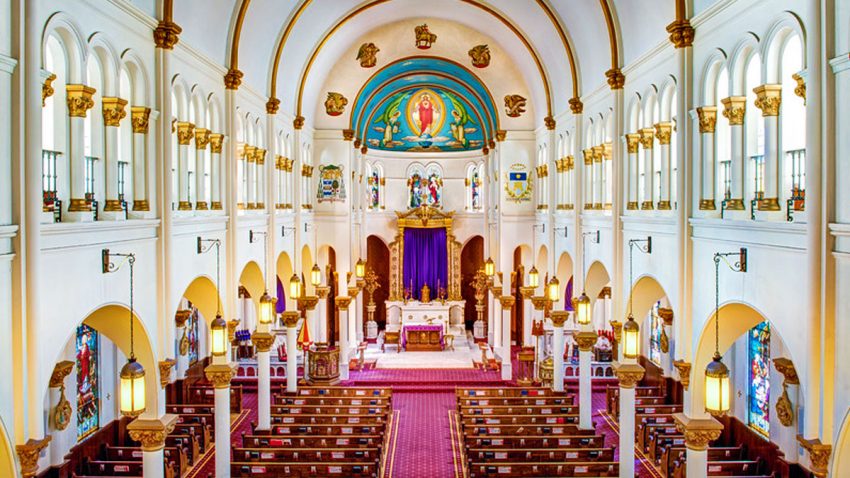 Glory to the newborn King!

Yet another Christmas season is here to celebrate the birth of our Savior Jesus Christ. A wonderful season to rejoice and to share the love of God. Misty nights, brightly shining stars, visually arresting lightings, beautifully ornamented Christmas trees, awesome cribs depicting nativity scenes, crisply wrapped gifts and cheerful Santa – nothing can beat the overwhelming happiness and gleeful spirit of Christmas. Churches and Cathedrals are decked up at its best during the festivity and are lively with midnight mass, melodious carols and fun-filled celebrations. Christmas In Karnataka is celebrated with equal zest and fervor as in other parts of the state in India yet has given it its own flavor.

Christmas is always full of joy and celebrating it in Churches makes it even more blessed. In this blog, we are presenting to you some of the famous Churches to visit in Karnataka during Christmas.

With ornate decorations and lightings, the church wears a festive look during the time of Christmas. The church attracts a large number of people on Christmas eve, cutting across religious lines. Devotees attend the special mass prayers and sermons at the church with utmost devotion.

Believed to have built-in 18th century, the St. Mary’s Basilica is the oldest church in Bangalore and the only church in the state elevated to the status of a minor basilica. It is situated in Shivajinagar in Bangalore and attracts many devotees from year-round.

The Church also sees a huge crowd of devotees during the Christmas time. You will be mesmerized by the solemn service and the beautiful decorations at the Church. The statue in the St. Mary’s church is believed to have miraculous power and there is a belief that prayers here are fulfilled by Mother Mary.

The Church has a fan-shaped hall which is built in such a way that no matter where you sit, you will feel the altar is facing you. It is one of the prominent Churches in Karnataka you should visit to enjoy the merriment of Christmas. Though the Church seats over 2,500 people, during the Christmas eve, it witnesses over 10,000 people who have come here to attend the holy mass and to indulge in the Christmas celebrations.

The Sacred Heart Church located in Richmond Road is one of the well-known religious landmarks in Bangalore. Built-in 1896, the Sacred Heart Church serves as a relic of the colonial past. The Church looks simply beautiful with the rare blend of Gothic and French architectural style having solid blocks of granite rock, marble interiors, beautifully sculpted statues and pillars decorated with Corinthian-style carvings.

The Holy Trinity Church is yet another must-visit church in Karnataka to enjoy the festivities of Christmas. It forms a major landmark in Bangalore and is situated at the Trinity circle towards the east end of MG road.

Built-in 1851 for the British Regiment stationed in Bangalore, the Holy Trinity Church is regarded as the largest military church in Southern India. It reflects an English Renaissance style of architecture and can accommodate 700 people at a time. The Church is mesmerizingly illuminated during Christmas and you will find myriads of devotees and tourists coming to the church for the midnight masses.

The St. Antony’s Shrine situated in Dornahalli is one of the famous Churches in Mysore, in the state of Karnataka. Dedicated to Saint Antony, this beautiful shrine is known for its miraculous powers. The Church premises are dotted with wondrous attractions both for the ardent devotees as well as curious travelers.

The attractions here include a Perpetual Adoration Chapel, a stall that offers rosaries, holy water, bracelets, key chains, etc, and the wide variety of animals and birds that the clergy raises. The Church is of immense beauty and it looks extra gorgeous when illuminated with lights during Christmas. To visit this shrine during the Christmas eve and attending the holy mass is a great experience.

Being one of the oldest churches in Mysore, St. Bartholomew’s Church was established to serve the European officers’ Christian congregation under the service of Mysore Maharaja and Mysore’s British resident. The main striking feature of this Church is its charming marble altar.

The Church is very famous for the eminent people who have visited it, including the 19th century reigning Governor-General of India, Lord William Bentinck, Lady Wellington, King George V, and Edward VIII. The solemn service at the Church accompanied by the melodious tunes of the pipe organ resonating throughout and the soothing carols makes Christmas eve a wonderful experience.

The Infant Jesus Cathedral situated in Hinkal, in Mysore was an initiative by Bishop Jacob Thoomkuzhy to fulfill the needs of the Syro-Malabar Community. The architecture of the church is more alike to the contemporary style than what you see at most of the grand cathedrals in the country.

Thatched terracotta tiled roof which is a common element of Malabari houses is the main highlighting feature of Infant Jesus Cathedral. Once you walk inside this Cathedral, you will realize that its central hall is shaped like an Octagon. Visit the Infant Jesus Cathedral during Christmas and feel blessed by attending the solemn Christmas service and the holy mass.

Built by the members of the Wesleyan Missionaries Society, the CSI Wesley Cathedral located at Doora in Mysore is 148 years old. Rev John Hachian, who arrived in India in 1821 with the aim of spreading Christianity took the initiative of its construction.

The Church is spellbinding with a towering bell-crowned steeple, yawning arches, and thatched roofs. It’s set in a picturesque landscape surrounded by rolling hills and alluring meadows makes it a beautiful place to visit. The Church hosts midnight mass during Christmas which is worth attending and the melodious carol service it hosts is simply soul-soothing.

Church of Our Lady of Miracles, Mangalore:

The altar of the Church is adorned with a beautiful French painting of St. Monica and St. Augustine. The Church celebrates Christmas in a grand manner and hundreds and thousands of devotees flocks to this church on Christmas eve to attend the midnight mass. With lightings and star lanterns, the Church is spectacularly decked up during Christmas.

Come, explore the beautiful Churches in Karnataka during Christmas & Newyear and may this Christmas season be memorable for you in every way.

So, which one of these best churches to visit in Karnataka during Christmas will you be seen jollying and blessing around this year? Take your pick and also check out our customized tour packages options given by South Tourism to enjoy a glittery and merry vacation in December.

If you know, any more best churches one can visit in Karnataka during Christmas, tell us in the comments below.

Enquire now and get the best deals and offers!