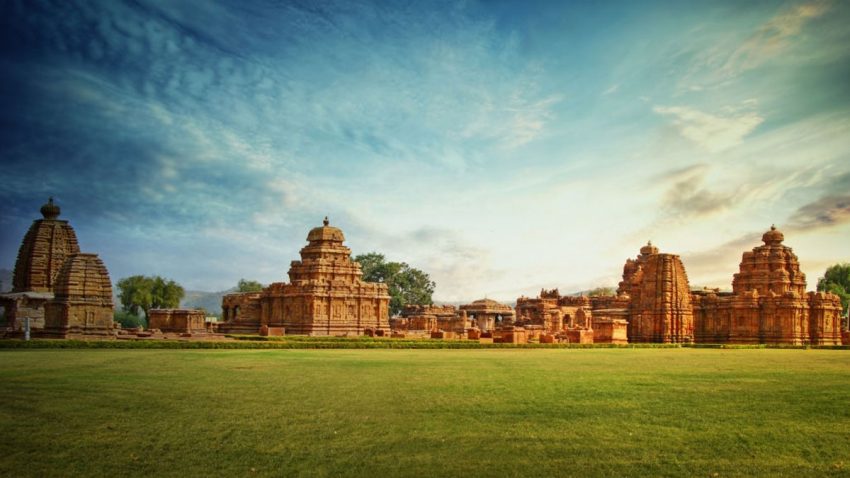 Home to the living ruins of Hampi; the architectural masterpiece of Chalukya Kings, Pattadakal; and world’s largest monolithic structure – the statue of Lord Gomteshwar; Karnataka is a traveler’s paradise.

Bounded by 6 states – Andhra Pradesh in the east, Tamil Nadu in the southeast, Goa in the west, Kerala in the southwest, Maharashtra in the north and Telangana in the northeast, Karnataka is a state of rich cultural heritage and breathtaking scenic landscapes. Karnataka holds the second-highest number of protected monuments in India and has a bundle of tourist attractions ranging from serene beaches, spellbinding hill stations, beautiful national parks and bountiful wildlife sanctuaries, gorgeous waterfalls, amazing forts and palaces to magnificent temples and pilgrimage sites which make it one of the most explored tourist destinations in South India.

Obviously, it is a great choice for a pilgrimage tour, heritage tour and educational tour as well. The Golden Chariot, a luxury tourist train that connects most popular tourist destinations in Karnataka, Goa, Kerala, Tamil Nadu as well as Pondicherry, which is recently introduced by the Government of Karnataka for tourist’s convenience, which is worth appreciable.

Let’s take a glimpse at the best Places to Visit in Karnataka:

The Garden City of India, Bangalore is a must-visit place in Karnataka. This cosmopolitan city is filled to its brim with loads of places to visit and a variety of dishes to eat which makes it a hub spot of tourists.

Bangalore is known for its pleasant climate, captivating gardens, magnificent palaces, charming lakes, and enchanting Nandi Hills. It is a renowned IT hub as well for which is referred to as the ‘Silicon Valley of India‘. The 300-acre Cubbon Park, Lal Bagh Botanical Garden, Tipu Sultan’s Palace, HAL Aerospace Museum, ISKCON Temple are the major tourist attractions in Bangalore.

Marked by numerous ruined historical edifices, structures and temples, Hampi reflects the glorious past and the remarkable artistry of the Vijayanagar Dynasty. It is one of the UNESCO World Heritage Site in India where one can admire the great artistic brilliance of the foregone era and a place that surely fascinates the history buffs.

Hampi is also home to an archaeological museum established by the Archaeological Survey of India where you can find numerous antique pieces, great sculptures and the proof to the history of Hampi. Virupaksha Temple, Vittala Temple, Achutaraya Temple, huge Stone Chariot, and the Nandi Statue are some of the major attractions of Hampi.

Visiting Badami, Aihole and Pattadakal is like exploring the heritage of Karnataka. Badami is home to rock-cut cave temples which are known for its inspiring Dravidian style of architecture.

The erstwhile capital of the Chalukya empire, Aihole is a delight for spirituality seekers as well as archaeologists due to the presence of numerous temples in and around it. Pattadakal is yet another UNESCO World Heritage Site in Karnataka which stands as a testament to the architectural expertise of the Chalukya dynasty.

Named after an umbrella-shaped lofty hill, Chitradurga is a popular tourist destination in Karnataka. Its spellbinding beauty and picturesque landscape, bounded by beautiful hills, valleys and rivers are the main captivating aspects of visiting this place.

Known for its historical significance, the Chitradurga Fort is a major attraction here. And this fort is said to be the place of Hidimba Rakshasa in the epic Mahabharata. One can find numerous temples, masjids, citadel, etc. inside the Fort.

Gokarna is a famous pilgrimage destination for Hindus in Karnataka. It is home to the sacred pilgrimage site, Mahabaleshwar Temple. Blessed with serene palm-lined beaches and breathtaking landscapes, Gokarna makes for an ideal treat for beach bums and hippies.

Apart from relaxing in its pristine beaches, one can enjoy activities like Banana Boat Ride, Beach Camping, Beach Yoga, Night Strolling, and so on. It is one of a kind place that envelopes you in ultimate tranquility.

Once the erstwhile capital of the Kingdom of Mysore, the beautiful city of Mysore is famed for its glittering royal heritage. It is located at the foot of the mesmerizing Chamundi Hills and is replete with the spectacular Mysore Palace, magnificent heritage sites and monuments, excellently laid-out gardens, sacred temples and amazing lakes, parks and museums.

Its quaint charm, rich cultural legacy and the presence of numerous tourist attractions draw millions of tourists all year round to Mysore. The exceptional quality of Mysore Silk, the unique tradition of painting known as Mysore Painting, Mysore Sandalwood, and delectable delicacies like Mysore Pak has won great admiration for this gorgeous land.

Coorg, an extraordinary hill station in Karnataka with matchless beauty, rewards all its visitors with a spellbinding visual treat of endless mist-clad hills, sprawling lush green coffee plantations decorating the beautiful valleys and the alluring milky-white streams flowing near it. Not just its captivating beauty but its rich culture and the most hospitable and friendly local clan attracts myriads of tourists to Coorg.

Nature lovers and photographers can enjoy to their heart’s delight at this wonderful destination and it is a place for adventure enthusiasts too. Namdroling Monastery or the Golden Temple, Raja’s Seat, Abbey Falls, Talacauvery are some of the famous tourist attractions in Coorg.

Nagarhole National Park is known for its rich flora and fauna and is said to have the highest density of herbivores in Asia. While Indian Tigers and Asiatic Elephants are the main highlights of this park, it also provides habitat to Leopards, Sloth Bears, Wild Dogs, Wild Boar, Sambar, Four-Horned Antelopes, Spotted Deer, Barking Deer, and variety of birds and amphibians.

Best Time To Visit: April to May.

An awesome place offering a feast of natural vistas, Chikmagalur is enveloped with a lush green spread of coffee plantations and is said to be the birthplace of Indian coffee for which it is nicknamed as the “Coffee Land of Karnataka“. Chikmagalur is an idyllic setting for a delightful vacation with the backdrop of dense forest, undulating mountain ranges and spectacular cascades that entice every type of travelers.

Loads of thrilling and adventure activities are offered in Chikmagalur hence it is a favorite haunt for trekkers and adventure seekers. The UNESCO World Heritage Site – the Kudremukh National Park, Bhadra Wildlife Sanctuary, Mullayanagiri, Baba Budangiri, Kemmanagundi, Jhari Waterfalls are some of the popular attractions of Chikmagalur.

Best Time To Visit: September to May.

The magnificent city of Belur was the capital of the Hoysala Empire during the 11th century. Belur is dotted with many architectural marvels and beautiful sculptures of Hoysala rulers that showcase their love for art and architecture which bring in thousands of tourists each year. The finest masterpiece of Hoysala architecture can be witnessed at the Chenna Keshava Temple, built in the 12th century.

The temple is embellished with exquisite carvings depicting scenes from the Upanishads, Mahabharata and Ramayana and the sculpture of Darpana Sundari (lady with mirror) is a remarkable example flawless craftsmanship. Due to its unmatched historical and cultural background, Belur is known as the modern Vaikuntha (heaven) on earth.

Famed for its collections of Jain Temples, Shravanabelagola is a historic place in Karnataka. It is home to the Gommateshvara Bahubali statue which is supposed to be the tallest monolithic stone statue in the world, carved out of a single block of granite and having a height of 58 feet. The Gommateshvara Statue at Shravanabelagola is one of the most prominent tirthas (pilgrimage destinations) in Jainism.

Apart from being a pilgrimage spot, Shravanabelagola is a wonderful tourist destination with lots of options for sightseeing, and photography. Chamundaraya Basadi, Bhandara Basadi, Parshwanatha Basadi, Kattale Basadi, Kambadahalli, etc are the popular attractions here. Vindhyagiri and Chandragiri are two magnificent hills of Shravanabelagola where most of the monuments are located.

Murudeshwar houses the second tallest Shiva statue in the world and is a popular Hindu pilgrimage center in Karnataka. The huge statue of Shiva measures a height of 123 feet.

Bounded by the magnificent Arabian Sea on three sides and perched atop the hills of Kanduka, this divine destination is known for offering spellbinding scenic vistas and mesmerizing sunset views. Another crowd-pleaser here is the skyscraping Temple Tower which is 249 feet high that has 20 floors and is considered the tallest Gopura(Temple Tower) in the world. The spectacular Murudeshwar Temple, Murudeshwar Fort, and stunning beaches are the major tourist attractions in Murudeshwar.

Mark an upcoming weekend to pack your bags and book a trip to Karnataka with South Tourism. Make sure you add these best places to visit in Karnataka to enhance your holiday experience!

South Tourism offers your the best South India holiday packages and customized Karnataka tour packages for you to discover the length and breadth of the fabulous state of Karnataka.