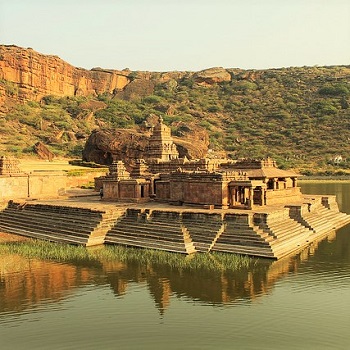 Badami or Vatapi, as it was formally called, is a town with archeological, historical and religious significance. The present day name of the town is believed to have been inspired by the almond-colored (badami in Hindi) twin hills on which it is located. However, the former name Vatapi was inspired by the tale of two demons Vatapi and Ilvala from Ramayana.In fact, the two hills are considered to represent the demons.

The Agastya Lake and the red sandstone hills guarantee you the ecstatic views. The ancient monumental cave temples built by the early Chalukya Rulers reigned between the 6th and 8th centuries still hold the pride of being the most popular tourist attractions. It can be understood that Saivism, Vaishnavism and Jainism were the most prevalent religions during those times as these four cave temples represent the presiding deities of the religions, two with Lord Vishnu, one with Lord Shiva and one with the Jain origin. The ornamentally designed and constructed Pillars, sculptures, facades and many other enchanting features speak the glory of these temples. Out of all, the 18-arm figure of dancing Shiva is a truly commendable structure.

One of the most pleasing ambience prevails around the Agastya Lake which has the two popular Bhutanatha and Mallikarjuna lakes on each of its bank. There has been many temples in South India which has followed the grandeur and style of these two temples.

Badami Fort, the most popular monument in Badami is located on a small cliff which is an architectural marvel. The ancient eras unfold in front of your eyes in the Archaeological Museum exhibiting the most interesting collections of artefacts. There are some inscriptions written in old Kannada language on the hillocks have been preserved and are worth viewing. The adventure minded tourists can enjoy rock climbing, a popular activity in the town undertaken by many climbers from different parts of the world. Badami with many historic treasures is indeed a travelers’ delight.

How To Reach Badami:

The airports nearest to Badami are Hubli at a distance of 100kms or Belgaum which is at a distance of 190kms. Many domestic flights land at Belgaum and Hubli which will be easier for the travellers to reach Badami by Road.

Badami can be reached from the nearby cities around which are well networked with the other regions of the state of Karnataka.