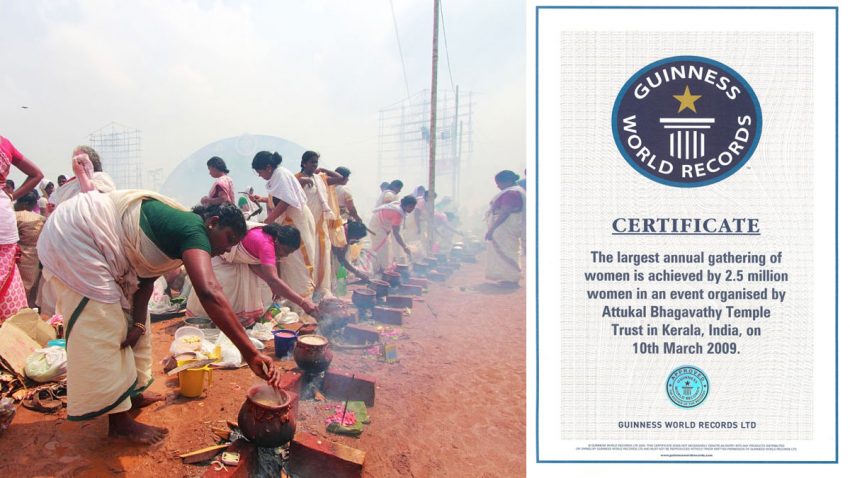 Kerala, the so-called God’s Own Country is among the most idyllic and exquisitely scenic places in South India. It is indeed a fairyland teeming with a spark of godly visuals and abundant natural wonders from gleaming backwaters to breathtaking hill stations. Among the magical treasures of Kerala is the amazing temples that portray its historical and mythological richness as well as its architectural excellence. Besides, the major draw of these stunning temples is its spectacular and ritualistic festivals, celebrated every year with great pomp and show. Among the renowned temple festivals in Kerala, the world-famous Attukal Pongal Festival needs a special mention as it is exclusively observed by women and has even won the Guinness World Record for being the largest single gathering of women for religious activity in the world. It is conducted every year with great ardour at the famous Attukal Bhagavathy Temple in Trivandrum district of Kerala to appease the Goddess Attukalamma.

The annual Attukal Pongala Festival will be held on March 9th, 2020 this year.

Join us on this reading venture to know more about Attukal Pongala Festival 2020:

Observed exclusively by the women folks, Attukal Pongala is the world-famous ritualist annual festival celebrated at the famous Attukal Bhagavathy Temple in Trivandrum district of Kerala. The religiously significant Attukal Pongal Festival commences on the Bharani day of the Malayalam month of Makaram or Kumbham which concludes with the sacrificial offering known as Kuruthitharpanam at night. It usually falls in February or March and lasts for ten days. Goddess Bhadrakali (Kannaki) is the main deity of Attukal Bhagavathy Temple who is fondly referred to as ‘Attukalamma’.

The ritualistic Attukal Pongal is dedicated to Goddess Attukalamma during which lakhs of women in traditional attires line up on either side of the roads around the Attukal Temple, praising the Goddess and making special offerings of Pongal which is actually a mix of rice with jaggery and grated coconut, cooked in fresh earthen or metal pots. The chief priest of the temple goes around, carrying Devi’s sword and blesses the ladies by sprinkling holy water and showering flowers. The blessed Pongala is then distributed amongst the devotees as Prasadam. Devotees believe that Attukalamma will be present at Attukal and blesses them during the Pongal festival.

The entire city gets live and loud Bhajans, musical concerts, ballets depicting folk and temple arts etc during the 10 days of the festival. The ninth day of the festival is when the ritualistic preparation of Pongal takes place. The women folk strictly observe this festival every year without any fail. The famous Attukal Pongal Festival also has a Guinness World Records for being the single largest gathering of women for religious activity as the participation of over three million women has been marked every year at this grand festival.

Better known as “Sabarimala of Women“, Attukal Bhagavathy Temple is a world-famous Hindu religious shrine in Kerala, dedicated to Goddess Bhadrakali whom the devotees fondly call as Attukalamma. The Goddess is worshipped at this temple in 3 different forms namely Maha Saraswathi – the Goddess of Knowledge in the morning, Maha Lakshmi – the Goddess of Wealth in the afternoon and Mahakali/ Durga/ Parvathy – the Goddess of Power in the evening.

Attukalamma is appraised as an avatar of Kannaki, the heroine of ‘Silapathikaram’ of Ilanko Adikal who is regarded as the supreme preserver and destroyer. The architecturally marvelous Attukal Bhagavathy Temple showcases an enchanting blend of Kerala and Tamil Nadu style of architecture. The walls of the temple are beautifully adorned with the mythological stories of Hinduism while the temple gopura portrays the stories of Kannaki on its one side. The major crowd-pleaser is the Dasavatara or the ten incarnations of Lord Vishnu inside the temple. Also, intricately carved figures of Mahishasuramardhini, Goddess Kali, Rajarajeswari, Sree Parvathy with Lord Shiva adds to the spellbinding beauty and artistry of the stunning Attukal Temple.

The legend behind Attukal Bhagavathy Temple is associated with Kannaki, a legendary Tamil woman who took revenge on the King of Madurai for a mistaken death penalty imposed on her husband Kovalan by cursing the entire city of Madurai with disaster. After annihilating the entire Kingdom of Madurai, Kannaki reached Attukal. There she disguised herself as a young girl and appeared in front of an old man near the Killi river and requested him to help her cross the river. The old was the head (Karanavar) of the Mulluveetil family, an influential family of the region, and was kind enough to help her cross the river. But her extraordinary charisma made the old man believe that the girl is divine, and he invited her to his home. But she disappeared from there and came back in his sleep that night and asked him to build a temple for her where he found 3 golden lines in his grove. As per the command, he built a temple which came to be known as the Attukal Bhagavathy Temple.

Trivandrum, the capital city of Kerala is a great place that has amazing historical and natural wealth and is of great spiritual significance too. Dotted with world-renowned temples, palaces, to captivating tourist spots, Trivandrum is a wonderful place to explore in Kerala. Some of the popular tourist attractions here are:

Miss-not the world-renowned ritualistic festival, Attukal Pongal on your visit to Kerala this March and seek the blessings of Goddess Attukalamma.