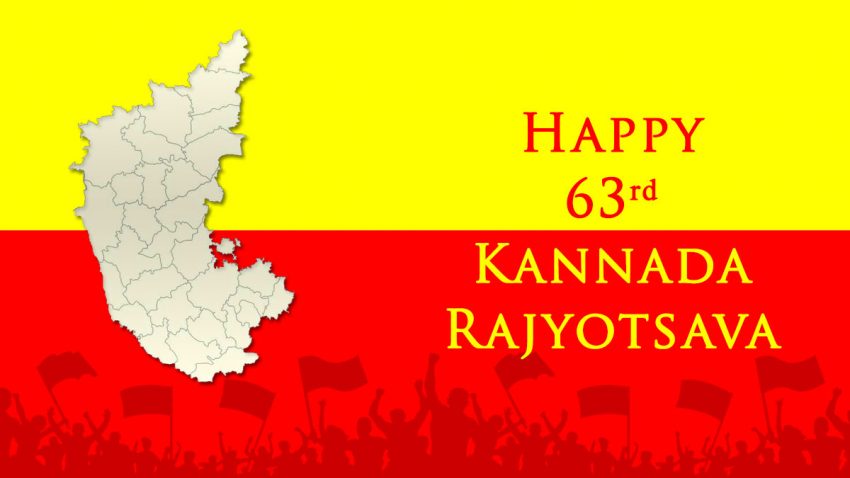 November 1 is an important day in the history of India, as on this day in the year of 1973 the princely state Mysore was renamed as Karnataka after prolonged debate and commotion. Late Devaraj Urs the then Chief Minister of state took this landmark decision. To celebrate the new state, every year of November 1 is commemorated as Kannada Rajyotsava or Karnataka Rajyotsava. Rajyotsava means “birth of a state”. On this day civilians who have contributed to the state of Karnataka will be honored with the prestigious Rajyotsava award. Karnataka is not only a place with lots of tourist destinations but also a place with a rich heritage and culture. Wait no more to explore this princely land.

Karnataka is a land where one can witness both the modernity and archetypal customs. It’s the land of million marvelous monuments, pleasing ambiance, silvery cascades and startling skyscrapers and is an apt place for a lovely getaway. This lovely state surely worth a visit. This blog gives you a gist of the highlights of Karnataka and things to do there.

And this took place on 1 November 1956 which is celebrated annually as the Karnataka day or Kannada Rajyotsava. Though the newly unified state initially retained the name “Mysore” which by itself was the princely state, some regions did not accept the name. Hence, after a prolonged debate, the state was again renamed as Karnataka on November 1, 1973. Devaraj Arasu was the chief minister of the state when this crucial decision was taken. Kannada Rajyotsava is considered as the biggest celebration of the state and is celebrated grandly every year.

The state of Karnataka gets into a festive mode with every street and house adorned with red and yellow state flags during Kannada Rajyotsava day. The celebrations include hoisting of the official Karnataka flag, recital of the state anthem, presentation of the Rajyotsava awards to people who made great contributions in the development of the state by the Government of Karnataka and speech by the Chief Minister and the Governor of the state.

Students who have won medals in various national games are also given awards on this day. A grand cultural event will be held at Kanteerava Stadium, Bangalore which is inaugurated by the Chief Minister of the state. As part of the celebrations, numerous concerts, processions, ceremonies are arranged by various communities, institutions, and political parties.

Karnataka is a place that has preserved its cultural heritage in modern times. There are many places in the state that are blessed with natural beauty and hence the state is one of the most visited places in the country, visited by both domestic and foreign tourists from different parts of the world.

Karnataka is also known as the “land of Monuments”, this lovely state in the South West of India has lots of amazing things to explore. Karnataka is geographically divided into the coastal region or ‘Karavali’, the hilly region or ‘Malenadu’ which consists of the Western Ghats and last on is the plains or ‘Bayaluseeme’ which is further divided into the northern and southern regions. Be it the IT hub Bangalore or the lovely paradise Coorg, Karnataka has everything in it.

Kannada is the official language of Karnataka, other than this the natives also speak Tulu, Kodava and Konkani. Most of the locals know Hindi as it is the national language of India. In some regions tail, Telugu and Malayalam are also spoken.

There are four main seasons in Karnataka Summer, Monsoon, Post Monsoon and winter. Though Karnataka can be visited any time, the most prominent time would be from October – December (Post monsoon) and January to February (winter season).

Karnataka satisfies the thirst of adventure seekers, historical explorers, nature lovers, honeymooners, beach lovers, pilgrims and all. This land is blessed with lots of unraveling scenic surprises. “The Scotland of India”- Coorg is located in Karnataka, which attracts millions of tourists every year. Chikmagalur yet another hot spot in Karnataka is famous for the coffee plantation. Other than this Kemmanagundi and Kudremukh are some other famous hill stations in Karnataka.

The coral destinations of Karnataka are vast and varied. Most sought after beach holiday destinations are Mangalore, Maravanthe, Byndoor, Malpe, and Karwar.

The State of Karnataka is known for its multitude of tourist attractions and temples. The Chalukyas, the Gangas, the Hoysalas, the Vijayanagar rulers and others contributed to diverse temple styles seen in Karnataka. One of the main tourist attractions of the state Karnataka is definitely its magnificent temples, that they are not just sacred places of worship but they are also steeped in the country’s history, heritage and traditions.

The state of Karnataka is renowned for the plethora of Hindu, Islamic, Jain and colonial architectures. It has a rich and varied architecture.

Karnataka tops all cities in India, in having classic immaculate monuments. Ergo it got its nickname as “cradle of stone architecture”. These crumbling relics are still now a bizarre even to the world’s brightest brains, these time-worn erections are magnum opium of the Vijayanagar empire and Mughal empire. You can feel the pride of our ancestors as you stroll in the pavilions of these hoary edifices. Hampi, Chitradurga fort, Pattadakal, Bidar fort, and Chowbara are some of the noteworthy monuments in Karnataka.

The 320 kilometers stretch coastline of Karnataka is dotted with a number of palm-fringed beaches, each of which has carpets of silver sands and azure blue waters make it an important gateway to Karnataka.

The blue water of the Arabian Sea caresses the west Karnataka and adds more beauty to this splendid land. All along with the coast, there are several untouched, unknown, and unpolluted beaches. Their tranquillity and serenity are their specialties and they are the real feast to our mind and soul. Never leave Karnataka without visiting Karwar beach, Murdeshwar beach and St. Mary’s Island.

The incredible number of hill stations in Karnataka makes it one of the most popular tourist destinations in India. Being the 8th largest Indian State, Karnataka is not merely known for its gushing waterfalls, mighty monuments and impeccable shrines, but also for its surreal hill stations.

The lovely notes of Birds, the sweet uproar of silver cascades, hustle and bustle of leaves and the embrace of the cool air, are all there to welcome you, as you enter the threshold of Karnataka hills. These hills have the best picturesque scenery and awesome natural scenic. Kudremukh, Agumbe, Chikmagalur and Kemmanagundi are the best of all hills in Karnataka.

With South Tourism, explore the unending charms of this state with a wide range of itineraries and holiday packages. With years of experience in the tourism industry, we assure you a wonderful lifetime experience with cost-effective rates, customized packages and high standard services.

Choose us and explore the wide arena of South India!