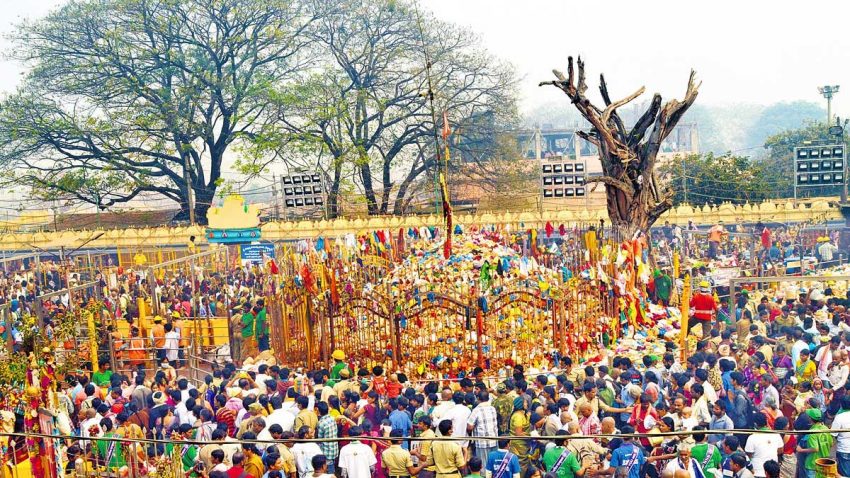 A Quick Look Into The World’s Largest Tribal Festival

South India is a diverse cultural treasure trove with a fabulous heritage and visually arresting luscious landscapes. The place is equally known for its unique and fascinating festivals celebrated in so much grandeur that it reflects the rich and vibrant culture of South India. From God’s Own Country, Kerala to the culturally rich Tamil Nadu, from heritage proud Karnataka to the spiritually divine Andhra Pradesh to historically significant Telangana and incredibly amazing Pondicherry, each state in South India host a variety of extraordinary festivals that are as vibrant and diverse as the land itself.

Have you ever heard about Sammakka Saralamma Jatara or Medaram Jatara? It is Asia’s biggest biennial tribal fair celebrated in the wonderful South Indian state of Telangana every two years with much ardour. Moreover, this unique tribal festival attracts the largest number of devotees in the country after the Kumbha Mela. This year Sammakka Saralamma Jatara or Medaram Jatara will be held from 5th February 2020 to 8th February 2020.

Join us on this reading venture to know more about Sammakka Saralamma Jatara or Medaram Jatara.

Sammakka Saralamma Jatara or Medaram Jatara is a tribal festival of honoring goddesses, celebrated every two years in Medaram, a remote hamlet in Eturnagaram Wildlife Sanctuary, a part of Dandakaranya forest range in the state of Telangana. It has been taking place here for over 1000 years. This biennial tribal festival is observed for a period of four days which commemorates the fight of a mother and daughter, Sammakka and Saralamma, against an unjust law with the reigning rulers. The devotees believe that the goddesses visit them during the festival and the real presence of the goddesses are felt in those 3 to 4 days of the Jatara.

People from Telangana, Andhra Pradesh, Madhya Pradesh, Maharashtra, Orissa, Chhattisgarh and other parts of the country visit Medaram to take part in Sammakka Saralamma Jatara. It is believed that after Kumbha Mela, it is Medaram Jatara which attracts the largest number of devotees in the country for a religious activity. It is also lauded as Asia’s biggest biennial tribal fair.

According to a tribal story, about seven centuries ago, a troop from the Koya tribal community found a newborn girl (Sammakka) in the forest on their way to the hunting. The tribals were surprised to see that the child is emitting enormous light playing amidst tigers. The head of the troop who got inspired by the girl’s bravery adopted her and named her as Sammakka.

Later, Sammakka was married to a feudatory tribal chief of Kakatiya rulers, named Pagididda Raju. The couples were blessed with two daughters and one son namely Sarakka, Nagulamma and Jampanna.

The legend says that due to prolonged famine in the area, Pagididda Raju failed to pay the taxes to then Kakatiya King Pratapa Rudra and sought more time to clear the dues. The King sent his army to collect the tribute from the tribals which resulted in a war between the Kakatiya and the tribals. It is believed that everyone from Pagididda Raju, Sarakka to Jampanna lost their lives in the battle against the Kakatiya Army.

During the battle, Sammakka/Saralamma was injured heavily by a spear thrown from rear and they walked into the nearby forest towards Chilakala Gutta. When the tribals went in search of them in the forest, they could find neither blood stains nor the body of Sammakka/Saralamma but only found a box containing vermilion (Kumkum), turmeric, few bangles and a pug mark of a tigress. To their surprise, it was exactly the place where they found Sammakka as a baby girl in the forest. Since then the tribes have been hosting Sammakka Saralamma Jatara.

Sammakka’s son Jampanna also died in this attack and fell bleeding into a Vaagu (stream) and later the whole Sampangi Vaagu has turned red. It is now known as JAMPANNA VAAGU (a tributary of River Godavari) where the present Mela is taking place and is also known for India’s most visited place after Kedarnath. Tribals believe that taking a holy dip in the Jampanna Vaagu will purify and absolve them from sins. There is a bridge constructed on Jampanna Vaagu which is named as Jampanna Vaagu bridge.

Sammakka Saralamma Jatara or Medaram Jatara is a festival with no Vedic or Brahminic influences. But is celebrated with all pomp and grandeur with tribal rituals only. The entire rituals of Sammakka Saralamma Jatara are conducted by Koya tribe priests in accordance with Koya customs and traditions. The main rituals include devotees offering Bangaram/gold (jaggery) of a quantity equal to their weight to the goddesses and taking holy bath in Jampanna Vaagu (stream).

The first day of the festival is celebrated as the arrival of Goddess Sarakka.

Sarakka is traditionally brought from Kanneboyinapalle village in the forest in the evening and then placed on an earthen platform (Gadde), the Sanctum Sanctorum of this Jatara which is raised under a tree.

The second day of the festival is celebrated as the arrival of Goddess Sammakka, the presiding deity of Medaram Jatara.

Sammakka is traditionally brought from Chilakala Gutta in the evening and then placed on the holy Gadde. Normally both the Goddesses are in the form of bamboo sticks smeared with turmeric (Goddess Sarakka) and vermilion (Goddess Sammakka).

The third day is Magha Suddha Pournami which is the most auspicious day of Jatara when the Goddess Sammakka Saralamma Darshan is available. Devotees offer Bangaram/gold (jaggery) to the goddesses and take a holy bath in Jampanna Vaagu on this day.

The festival culminates on the fourth day when the Goddesses Sammakka and Saralamma are taken back to the forest. This ceremony is known as ‘Sammakka Saralamma Vanapravesham’.

It is said that during the festival a huge tiger moves around peacefully and there is a great tumult accompanied by frenzied beating of drums, trumpet blowing and yells when the priests get the ochre box and other important relics from a hidden forest location.

By Road: Medaram is well-connected to major cities of Telangana like Warangal, Bhupalapally, Karimnagar, etc via road. The village of Medaram is easily accessible by NH 163.

Visit Telangana this February and get a chance to witness Asia’s biggest biennial tribal fair, Sammakka Saralamma Jatara on your trip.