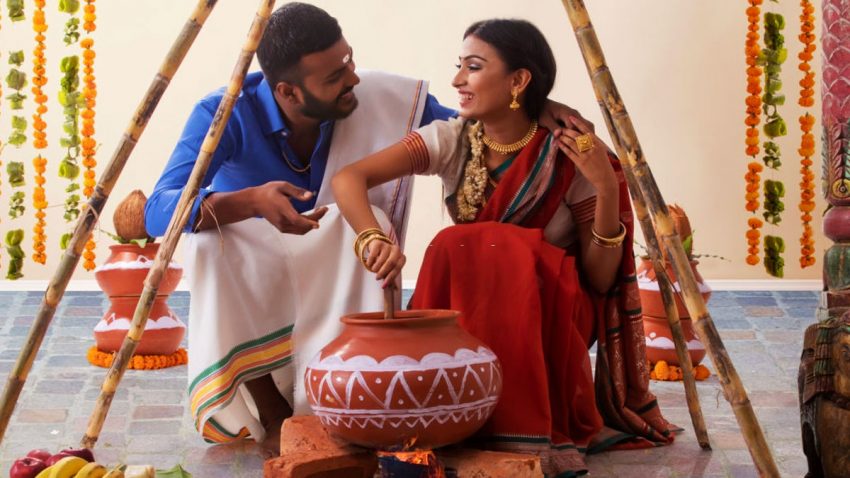 A Complete Guide About 2020 Pongal Festival In Tamil Nadu

Being one of the oldest civilizations in the world, Tamilnadu is supremely rich in culture and heritage. With a vast plethora of history that dates back to 2000 years, stupefying architectural splendors in the form of temples, monuments, forts, etc and a wealth of vibrant festivals, Tamilnadu remains proudly distinct from the rest of India. People of Tamilnadu are so proud of their rich culture and traditions which are excellently manifested through the grand festivals celebrated in the state. Among the other festivals, Pongal is the most prominent festival of Tamilnadu, celebrated by the Tamil diaspora worldwide. It is observed as the popular harvest thanksgiving festival of Tamilnadu.

Join us on this reading venture to know more about Pongal Festival:

Pongal Festival is the major festival of Tamilnadu and also the most important and popular Harvest Festival of Tamilnadu, dedicated to Sun God, thanking him for the agricultural abundance and is celebrated with great religious fervor. It’s a four-day festival that usually commences on the 14th day of January every year and is considered as an auspicious occasion to start new ventures.

This Harvest Festival is named after the ritual “Pongal“, which means “to boil or overflow” and it also refers to the traditional dish prepared during the festival using the new harvest of rice, cooked in milk with jaggery. The Festival marks the end of the winter solstice and the first day of the sun’s return journey to the northern hemisphere, that is when the sun enters the zodiac Makara (Capricorn) which indicates Makar Sankranti, known by different names in various parts of India. The festivity is known as Pongal in Tamilnadu, Makar Sankranti in North India, Lohri in Punjab, Magh Bihu in Assam, Hadaga in Maharashtra, and so on.

When Is the Pongal Festival Celebrated in Tamil Nadu?

Pongal Festival in the Other States In India:

Though Pongal is a major festival of Tamilnadu and is observed by the Tamil diaspora worldwide including those in Singapore, Malaysia, SriLanka, etc, it is widely celebrated all over India with great enthusiasm and religious fervor but in different names.

While it is known as Pongal in Tamilnadu, the festivity is known as Makar Sankranti in Northern states of India as it marks the day when the sun enters the zodiac Makara (Capricorn). Likewise, it is celebrated as Lohri in Punjab, Magh Bihu in Assam, Hadaga in Maharashtra, and so on. With colourful decorations, singing, dancing, fairs, exciting activities like kite flying, etc, people all across India celebrate the festival with much pomp and grandeur. Elaborate feasts are also arranged and people lights bonfire to make the festival a grand event.

Likewise, it is celebrated as Lohri in Punjab, Magh Bihu in Assam, Hadaga in Maharashtra, and so on. With colourful decorations, singing, dancing, fairs, exciting activities like kite flying, etc, people all across India celebrate the festival with much pomp and grandeur. Elaborate feasts are also arranged and people lights bonfire to make the festival a grand event.

How Tamilnadu Celebrates The Pongal Festival?

People of Tamilnadu celebrate the Pongal Festival for four days with great ardour and religious fervor to invite good harvesting year ahead. On the day of Pongal, people visit the temples to seek the blessings of God Almighty, decorate the entrance of their houses with colourful Kolams, make a special sweet dish called ‘Pongal’, and exchange gifts with their near and dear ones. Various cultural programs and ceremonies are arranged in schools, colleges, offices and other places in and around Tamilnadu during Pongal to make the festival a magnificent one.

The first day of the Pongal Festival in Tamilnadu is known as Bhogi Pandigai or Bhogi Pongal. It marks the last day of the Tamil month Marghazi during which people assemble and lights bonfire made of wood and cow dung to burn the unused household items.

People clean their houses, paint and embellish them with beautiful decorative to give a festive look. On this day, people offer prayers to the god of rains, Lord Indra with thanks and hopes for plentiful rains in the year ahead.

The second day is known as the Surya Pongal or Thai Pongal which is considered as the main festivity of the Pongal Festival. It is the first day of the Tamil calendar month Thai and coincides with Makara Sankranti which is widely celebrated all over India. This day is dedicated to the Hindu God Surya (Sun) and it marks the start of the Uttarayana when the sun enters the zodiac Makara (Capricorn).

On Thai Pongal, people decorate their houses with banana or mango leaves and embellish the entrance with colourful Kolams. The special sweet dish called ‘Pongal’ is prepared in a traditional earthen pot using freshly harvested rice grains, milk and jaggery which is allowed to boil and overflow out of the vessel, symbolizing their wish of greater fortunes in the year ahead. The pot is typically decorated by tying a turmeric plant or flower garland and is offered to the Sun.

The third day is known as Mattu Pongal which celebrates cows and their holiness. Cattles are decorated with flower garlands, bells, etc, their horns are painted, offered special meals and are worshipped on this day.

Cattle are regarded as sources of wealth for providing dairy products, fertilizer, transportation and agricultural aid by the Tamil Hindus. Many cultural programs and cattle race like ‘Jallikattu’ takes place on this day.

The end of the Pongal Festival is marked by Kaanum Pongal, also known as Kanya Pongal. On this day women and young girls perform a special kind of ritual called ‘Kanu Pidi’ and pray for the wellbeing of their brothers.

According to this ritual, they place a leaf of turmeric plant in the courtyard of their house and feed the leftover ‘Pongal’ dish from Surya Pongal to the birds, especially crow.

Madurai is one of the best places to visit in Tamilnadu to enjoy the real essence of the Pongal Festival. Special rituals are held at temples on all the four days of the Festival and visiting the temples of Madurai during Pongal is a unique and enriching experience. One can get a glimpse of how farmers display the harvested products before the Sun God as thanksgiving ritual and the traditional way of celebrations.

During this festival time, Tamilnadu Tourism organizes Pongal Tourism Festival attracting tourists from different parts of the world to Madurai, giving them a chance to witness the vibrant Pongal Festival, thereby exploring the culture and traditions of Tamilnadu. Village visits, cultural programs like Bharathanatyam, Kargattam, etc are organized during this festival. One of the major attractions of Pongal celebrations in Madurai is the ‘Jallikattu‘.

Thanjavur is a special place to be at to celebrate Pongal Festival. The place exudes a unique charm with houses adorned with beautiful decorations, colourful Kolams, and flower garlands. Visit the famous Brihadeeshwara Temple to witness the temple’s celebration of Mattu Pongal where several cows are lined up by the owners for Puja at the temple.

‘Jallikattu‘ and ‘Katha Kalakshepam’ in temples are the prime attraction of the Pongal Festival in Thanjavur. The Department of Tourism Government of Tamilnadu organizes Pongal Tourist Festival in Thanjavur which is worth attending. The Festival includes village visits, traditional games, Pongal demonstrations, bullock cart ride and folk dances.

Another best place to witness the traditional Pongal Festival in Tamilnadu is Salem. Here, Pongal is celebrated in a special and unique manner which involves the traditional activity of ‘Fox Darshan’. The highlight of this festive is that the members of the village forage the nearby forest for a fox that they carry back to the village to worship during the Pongal ceremony and it is returned to the forest after the worship. Cattles are also worshipped here during the Pongal Festival in Salem.

Coimbatore celebrates Pongal Festival with great pomp and show, making it one of the best places to visit in Tamilnadu during the festivity. The entire city sparkles with lights, houses adorned with colourful and beautiful Kolams and flowers, displaying a festive look.

Bustling with a plethora of shops and stores, Coimbatore is one of the best places to go for festive shopping. One can visit the gorgeous temples and traditional villages on your visit to Coimbatore and experience the rustic charm and the vibrant festivity during Pongal.

Pollachi is yet another great place to visit in Tamilnadu during Pongal Festival. One can enjoy the true essence and fervor of the Pongal Festival at the same time explore the scenic beauty of the place and get a glimpse of the cultural heritage of the place while visiting Pollachi during the time of Pongal.

Have a joyful and prosperous Pongal! Wishing that this festival of harvest brings peace, prosperity and good luck in your life and fills your days ahead with happiness.

Book a trip to South India with South Tourism and make sure you add the vibrant Pongal Festival on your must-see event during your trip to Tamil Nadu.

South Tourism offers you the best South India holiday packages and customized South India tour packages for you to discover the unique and extraordinary festivals of South India.