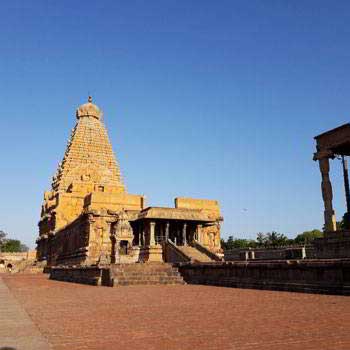 The rice bowl of Tamil Nadu, the powerful capital of the Medieval Chola Period, the birth place for many art forms of Tamil Nadu is Thanjavur, in the down south of Tamil Nadu. Thanjavur has been under the various reigns right from the early Cholas till the Maratha Bonsleys. The city has contributed to many forms of arts in Tamil Nadu, to name a few, the Paintings of Tanjore, the Dolls and the fine tuning of the Classical Barathanatyam styles.

After the Pandyas ruling the city for a long time, the throne was recaptured by the popular Medieval Chola King Vijayalaya and the city remained to be the power center for more than 300 years. The Nayak Kings who were famous for the patronage of arts and music, while ruling the city have contributed more to the development of art and culture. The city on the Cauvery Delta has been a prominent place for agriculture and catered to the people all over Tamil Nadu.

There are many interesting places to visit in Thanjavur. The city is one of the major tourist attractions of Tamil Nadu. The South Zone Cultural Center instituted by the Government is keen in promoting and preserving the cultural heritage of India. It will be surprising to know that, in such a small city, Thanjavur, there exists five museums portraying the life style of the different dynasties. The Archeological Museum, Tamil University Museum, Saraswathy Mahal Library Museum, Nayak Darbar Hall Museum and the Raja Raja Chola Museum are the places where we can witness several preserved idols, palm leaf scripts and other valuable possessions.

The most important monument to be visited in Thanjavur is the Brahadeeswarar Temple popularly known as the Big Temple. It is recognized as the World Heritge Site by UNESCO in 1987. The temple was built by the Medieval King Raja Raja Cholan during the 11th Century. Even after thousand years, it stands as an Engineering Marvel and the technology deployed in building the huge Lingam and the single stone tomb atop the tower is still a mystery.

The other places of interest are the Saraswathy Mahal Library housed inside the Thanjavur Palace. It was instituted in 1700. The Library has a collection of 30,000 manuscripts including those written on palm leaves. The entire library is only a reference section where amazing information on Indian and British literatures and contents on other subjects are preserved in their original form.

The darbar hall of the Maratha Palace is yet another important place to visit. The huge halls and the long corridors are worth paying a visit. The next place to visit in the city is the Sivaganga Park which was opened to Public in the mid of 18th century. The Tamil University situated in the outskirts of the city caters to the researchers on langauages and lexicography. The buildings in the University has been constructed in such a way that the aerial view of the university is in the form of the word “Tamil” written in Tamil.

Come and enjoy the mesmerizing architecture of the Big Temple and the other fascinating tourist attractions of the Rice Bowl of Tamil Nadu, Thanjavur !

The nearest airport is Trichy which is at a distance of 60kms from Thanjavur.

Thanjavur is well connected to all major cities of the southern states of India.

The city is connected across the major cities of Tamil Nadu with well laid roads to ensure a smooth travel.