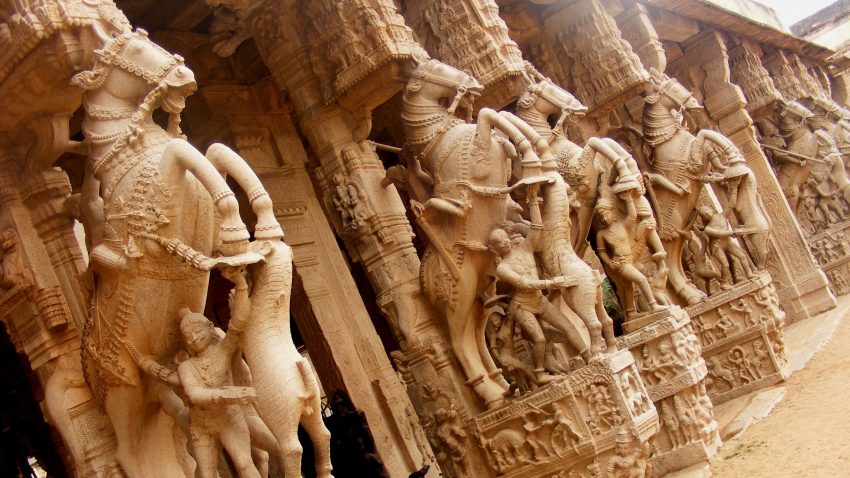 The ineffable art forms, inexplicable architecture, detailed carvings, and timeless pillars of temples belonging to South India carry the hidden soul of one of the greatest history of humanity. Listed below are seven well-worked pillars filled with years of dedication of thousands of sacred souls. These Pillars have an extensive history as pristine as the ancient sights in Turkey like Göbekli Tepe, the oldest temple in the world built by the Hunter-Gatherer community. Although the agriculture revolution reached its peak during the construction of these South Indian Temples, the heritage of these holy spots will remain timeless, irrespective of modern ideologies.

“Arise-O-Bird” is the meaning of Lepakshi. It was built by Viranna and Virupanna dedicating it to Veerabadhra. The temple has a predominant Vijayanagara architecture. Veerabadhra temple is believed to be built by giants. An enormous “Hanuman Footprint”, “Huge Nandi” and Shivalinga guarding “Naga Linga” have an equal amount of mystery like the Hanging Pillar. How on Earth is this possible for a pillar to hang, disconnected from the ground?

One of the elegant and exotic temple pillar carvings belonging to Tamilnadu is Nellaiappar Temple. Each pillar makes a distinct sound and they are intricately sculpted too. “Nellaiappar” means the Protector of Paddy. Being one of the Pancha Sabhas (dance halls) of Lord Shiva, the temple is one of the largest in South India. The 1000 pillar mandapam will be lit from October 15th to November 15th. The wedding of Nellaiappar with Kanthimathi Ammai will take place in a grandeur manner.

The masterpiece monument of the Pandiya Empire was constructed in 1569 A.D. Each pillar has a unique design and carving which means it was absolutely planned and curated with the help of tonnes of people. Just outside the hall, to the west, musical pillars are present. Similarly, carvings of Rati, Yazhi, Karthikeya, Ganesha, and Shiva as mendicants, art museum, and the overall atmosphere of Meenakshi Amman give an exhilarating experience.

The coruscating craftmanship of the Vittala Temple complex is located along the Northeastern part of Hampi, close to the banks of Tungabhadra River. The erstwhile capital of the Vijayanagara Empire is two important structures. The musical pillars and stone chariot still speak the artistic creativity and dedication of one of the mammoth empires in the world. The SaReGaMa pillars of the Vittala Temple are carved out like musical instruments with minor pillars, each producing a different sound quality.

This temple is considered to be the birthplace of Nammazhvar, the renowned Vaishnava saint. Both blowing and tapping pillars are present in this temple. The stone nadaswaram, a double-reed wind device is one among the salient features of Alwar Tirunagari Temple. The town of Alwar Tirunagari was affluent during the era of the Pandya Kings. People come to this Lord Vishnu Temple for its adorable interiors.

This particular temple is said to be built by ancient machining technologies. A few sets of people believe there is no way this temple is coming out with traditional chisels and hammers. The 12-foot tall pillars were machined 900 years and archaeologists are dazzled by the unknown theories associated with this temple. The Garuda Pillar on the open ground is an immaculate structure describing the loyalty of the bodyguards of Kings and Queens.

Another Hoysala marvel in the Hassan district of Karnataka is Chennakesava Temple built by Vishuvardhana. The artwork of dancing girls, Narasimha Pillar, and Gravity Pillar are prime attractions of this temple. The four central pillars out of 48 pillars are hand-chiseled, famous for the Mandanikas (celestial damsels). The 42 m high pillar on the central courtyard of the temple stands on a star-shaped platform without any foundation.

The exquisite temple structures and carvings of India are well known all around the world. These seven pillars are tiny examples of the architectural skill of the ancestors of South India. From music emitting pillars, free-standing pillars to hanging pillars, these structures defy science beyond human belief. A visit to these temples will motivate one to learn more about the impossible artistic qualities of Dakshin India. Book your maiden mysterious temple trip with South Tourism and seek answers for the unsolved mysteries.