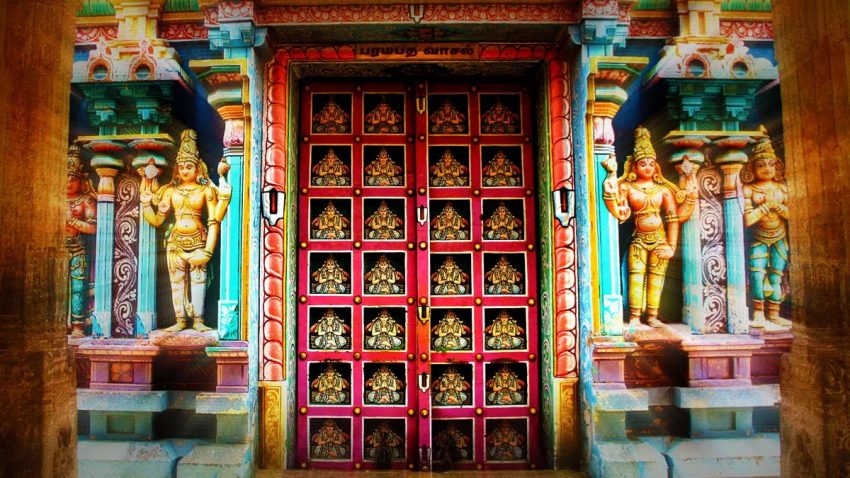 Srirangam Sri Ranganathaswamy Temple, wearing a festive look and getting ready for the grand annual festival Vaikunta Ekadasi. First, in the list of 108 Divdesams, the sacred shrines of Sri Vaishnavism, listed in the 6th-century epic Naalayira Divya Prabhandham. In Vaishnavism parlance, the Tamil word meaning temple, Koil, refers to Srirangam temple only. Vaikunta Ekadasi Festival is celebrated starting from the Amavasya (No moon day ) of Tamil Karthigai month for 21 days. This year the festival starts on 14th December 2020 and ends on 4th January 2021.

This year the grand opening of the Vaikunda Ekadasi – Sorga Vasal  / Paramapathavasal gate will be held in the early hours of December 25, 2020. For the first time, devotees will not be allowed inside the temple during the Paramapathavasal opening due to the pandemic.

A beautiful island between the rivers Cauvery and Coleroon is home to the magnificent Lord Ranganatha temple housing the self-manifested reclining statue of Lord Ranganatha Swamy. Srirangam was the prime hub of the Bakthi Movement to rejuvenate Hinduism after the successive invasions of Mughal Emperors.

The facade tower of the 13th-century temple is the tallest in Asia and the entire Srirangam is a well-planned town built within the huge Seven precincts enclosed by thick rampart walls and 21 towers of the temple. The temple is a classic example of Dravidian Style Architecture with intricately designed statues and paintings all over. Srirangam temple is the world’s largest functioning Hindu temple and India’s largest temple complex, flocked by devotees and tourists round the year.

Vaikunta Ekadasi is one of the significant festivals celebrated in all Vaishnava temples across India. Out of all the temples, Srirangam temple deserves a special mention here owing to the historical significance and the codifications formulated by Udayavar Sri Ramanujar who re-instated Sri Vaishnavism on a larger scale with lots of reformations. After a break of a few decades, Udayavar, re-established the practice of celebrating Vaikunta Ekadasi very elaborately for a span of 21 days.

Vaikunta Ekadasi is a 21 days long festival with the first-day ritual known as Tirunenthandagam, the epic event of reciting the verses by Thirumangai Azhwar, glorifies the Lord Ranganathar. Azhwars are the TWELVE saints in Sri Vaishnavism whose verses are composed into the one single holy book of the sect, Naalayira Divya Prabhandam with great efforts by Natha Muni.

The first ten days are known as Pagal Pathu when the designated set of people called Arayars, the descendants of Natha Muni, who composed the entire 4000 verses of Naalayira Dhivya Prabhandm, enact the verses in Naalayira Dhivya Prabandham in the form of Dance-Drama, all in praise of Namperumal, Lord Ranganatha Swamy, whose gorgeously decorated idol is placed with a strong belief that he himself listens to the performance and graces everyone with his blessings.

The 10th day of Pagal Pathu deserves a special mention here. Lord Ranganatha takes the form of a beautiful woman, and his attire is called Mohini Alankaram.

This happens once in a year with a historic reference to the disguise of Lord Krishna to lure the nector from the demon kings during their war with the Celestial Gods, as mentioned in the epics of Hinduism. Thousands of devotees arrive at Arjuna Mandapam where the Lord in Mohini Alakaram is placed and taken back to His sanctum around 9PM.

On this day, the reclining deity of Lord Ranganatha is decorated with gorgeous attires with pearls all over his coat and he is worshipped as Perumal in Muthu Angi Seva.

The processional deity of Lord Ranganatha, called Namperumal comes out in the wee hours from his sanctum. Bedecked with attires studded with expensive rubies and precious stones, Lord is known to be in Rathina Angi. He comes out through Sorga Vaasal (Gateway to Heaven) amidst the chanting of divine verses followed by thousands of devotees who arrived from all parts of the country. Devotees strongly believe that worshipping Him, while He comes out through the Gateway to Heaven will grant them salvation. This year Vaikunta Ekadasi is on the 25th of December, 2020.

Starting from the day of Vaikunta Ekadasi, the next ten days are called Ira Pathu, when the Arayars enact the Dance – Drama during night times with hundreds of audience and most importantly, Lord Namperumal, listening about himself, being glorified with the verses. On all these days, Lord reclining at the sanctum continues to be in Muthu Angi attire.

The 8th day of Ira Pathu is signified as an important ritual called Thirumangai Mannan Vedupari. Thirumangai Mannan was the King who lost all his wealth for feeding 1008 Vaishnavites every day and to continue his services, he had to opt to be a thief despite his staunch devotion to the Lord. The interesting story of a thief transformed into a saint with the grace of the Lord is the essence of this ritual and talks about Thirumangai Azhwar, who got showered with the blessings of the Lord in over 1000 verses.

The entire ritual is enacted and Lord Namperumal is taken on a procession sitting on a Golden Horse, enjoying the mediation between himself and the thief and finally blessed him. Vaiyali is the special type of dance, performed by Thirumangai Azhwar on the moment of enlightenment and the entire sequence is narrated on this day, which is truly a feast to the eyes.

The 21 days festival of Vaikunta Ekadasi culminates with Nammazhwar Moksham. Most prominent of all the Twelve saints, Nammazhwar is acclaimed as Vedham Tamil Seitha Maran, instrumental in making Naalayira Dhivya Prabhnadam an eternal epic.

To honour his services to the sect, it is believed that Lord Namperumal graced him with salvation on this day. Adorning the garland worn by Namperumal, Nammazhwar is taken in procession and after reciting the last ten verses of the epic, Nammazhwar falls at the feet of Namperumal, such a dramatic scene illustrating the emotional moments of the past. With this glorious event, the 21 days festival comes to a halt.

Srirangam Ranganathar Temple is known popular to celebrate festivals round the year and the Vaikunta Ekadasi festival is one of the most prominent celebrations, paving a way for mankind to inculcate harmony and peace.

Vaikunta Ekadasi is one such big festival, truly special to be witnessed, during your tour to South India.

So, plan to visit Srirangam this time, the island and Lord Ranganathar never fail to fascinate you!

To know more about festive dates and travel, feel free to visit www.southtourism.in