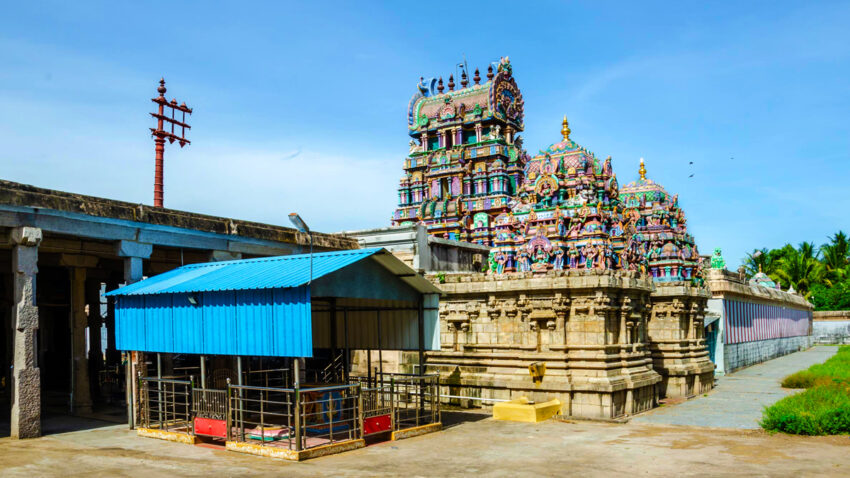 Tamil Nadu’s heritage glory and cultural beauty are well-expressed in its marvelous temples. A multitude of temples and shrines of various gods and goddesses, Navagrahas, and spiritual gurus; can be found here at every step of the way. But did you know this ‘Temple City of India‘ even has a temple for the deity of Chess? Yes! You heard it right! Sathuranga Vallabhanathar Temple in Tamil Nadu is one-of-its-kind in the world, dedicated to the deity of Chess.

If this sounds exciting, then join us on this reading venture!

Sathuranga Vallabhanathar Temple is an ancient Lord Shiva Temple situated at Thirupoovanur in the Tiruvarur district in the state of Tamilnadu. This strange yet mind-blowing temple represents the state’s historical connection to the game of chess. The presiding deity Lord Shiva of the temple is known by the name Sathuranga Vallabhanathar, the Lord of Chess. He resides here with his consort Rajarajeswari who is also a keen chess player. This is the 103rd Lord Shiva Temple situated on the southern bank of Cauvery praised in Tevaram hymns.

Sathuranga Vallabhanathar Temple is believed to offer relief to people suffering from Asthma. The temple also houses a shrine for Goddess Chamundeswari. Devotees pray to Goddess Chamundeswari for child boon, removal of delay in marriage, and a solution to financial problems.

In ancient times, there lived a King named Vasudevan who ruled the Tirunelveli region. He and his wife Gandhimati were ardent devotees of Lord Shiva. Though the couple lived happily, they didn’t have a child. They visited several Shiva Temples, seeking child boon.

The royal couple started fasting and worshipped Lord Shiva with utmost devotion at Nellaiappar Temple in Tirunelveli. Pleased with their prayer and steadfast devotion, Lord Shiva made Goddess Parvathi to be their daughter and Goddess Chamundeswari, Her nurse.

One day, while the couple were taking bath in River Thamirabarani, they found a conch lying in a lotus flower and floating towards them. As they picked up the conch, it became a girl child, all of a sudden. They named the child Rajarajeswari and showered her with their love and affection.

Growing up, Rajarajeswari became invincible in the game of chess. Knowing her talent for the Chess game, King Vasudevan announced that he would marry her daughter off only to the man who would defeat her in chess. But none could win her over.

It was then that Lord Shiva disguised as an ascetic and challenged Rajarajeswari in chess. He won the game and showed his true form, granting darshan to all. Rajarajeswari was then married to Lord Shiva and the divine wedding took place with all its pomp and grandeur.

The 44th edition of the FIDE (Fédération Internationale des Échecs) Chess Olympiad taking place in Mahabalipuram has helped Sathuranga Vallabhanathar Temple gain popularity among devotees and chess lovers. The temple is now witnessing an increased devotee footfall than ever. The priests of the temple had even performed a special pooja for the Chess Olympiad to become a grand success.

The Chess Olympiad 2022 officially kickstarted with a grand opening ceremony on 28th July 2022, Thursday at the Jawaharlal Nehru Stadium in Chennai. The matches will be held from July 29th to August 10th, 2022, at the Four Points by Sheraton Mahabalipuram Resort and Convention Centre.

If you find this blog interesting, please let us know in the comments below.

Also, never miss the opportunity to visit Sathuranga Vallabhanathar Temple in Thirupoovanur on your next trip to Tamilnadu.