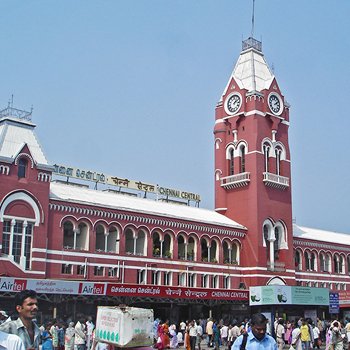 Chennai is the heart beat of Tamil Nadu. It can't be tagged as one, as it has in it the modernity of Bombay, the tradition of Kerala, the spirit of Delhi and the style of Goa. The Sun hits the land with lots of love and so all days here are sunny days. It also takes the pride in having the world's second largest beach and it is a perfect spot for a sojourn. There are good deals of tourist places in and around Chennai, which are worth a visit.

The South & West Chennai, previously mostly residential, are now becoming commercial with many upcoming firms & call centres. The city is fast expanding in the south & in the west.

Art and music dwells in the land of Chennai and that is why it is called the Musical and Cultural capital of India. There are plenty of art galleries and music schools in Chennai among which Kalakshetra which hailed as one of the best dance schools in India.

It is a major trade centre, being well linked by road, rail and air to important cities besides being a sea port. Compared to the other major metros of India, it is far less congested and polluted.

Chennai is a tropical land and the climate is mostly sultry. The normal temperature is around 40°C - 30°C during summer and around 30°C - 24°C during winter. Rain is a rare guest to Chennai.

Apart from the hustle and bustle of Chennai city life, there lie the colourful cultural festivals of Chennai. The cosmopolitan people get out of their mundane life and groom their tradition by commemorating lots of festivals and fares.

Behold the majestic statue of Lord Nataraja ‘The Cosmic dancer' in Chidambaram near Chennai. Every year on the eve of Natyanjali momentous tribute is paid to Nataraja. This eve lasts for five long days in the month of February.

Dancers and Singers from all over India participate in this ‘Margazhi Festival of Dance and Music' to exhibit their talents and to hail their traditional art. This festival falls in the month of mid-December. It is a feast to our eyes and ears to see and listen to the artists’ excellent performance on stage.

Each and every year Tamil Nadu Tourism Development Corporation conducts tour fair in Island Ground in order to promote the tourism interests among people. In this festival many tour packages and special honeymoon packages are given with special offers.

Pongal is a kind of ‘Thanksgiving' festival to the Sun God for his blessings upon the farmers and their crops. This fete is celebrated during the month of January. It is a three days eve and one of the days is spent as a reverence to the cows and bulls that have helped the farmers.

Kapaleeswarar Temple : Chennai's renowned and cherished Kapaleeswarar temple is the chief land mark of Mylapore. The prime deity is Lord Shiva in the form of a Lingam .This temple is mostly buzzed with devotees on all Mondays and Fridays. The dazzling 12 days celebration of Bhramotsavam during the month of March is a splendour sight to witness.

Snake Park : Snake Park at Guindy will surely cast a chill down your spine. This eerie park has a wide range of snakes and reptiles. There is also a session where they show the practical demonstration of venom extraction.

Marina Beach : Marina is the world's second largest beach. The pleasant promenades running along the sugar-white sands of the beach adds feather to Marina. A peaceful stroll in the old promenade popularly known as “Cupid's Bow” will take you to the seventh heaven. It’s never ending shores draws a million to marvel at the swarm of people spending their time on the lap of Marina.

Cholamandal Artist : This is the largest artist commune in India. This village was erected by the artists without any financial help from the government. This archive has a wide collection of intricate paintings, meticulously done sculptures and beautifully emblazoned art works. Don't miss an opportunity to visit this awesome place.

The Anna Centenary Library : It is the apt place for bookworms. This enormous library takes the pride in being one of the largest libraries in Asia. Behold the nine storied modern building which houses about 500,000 books and piles of magazines from across the world.

Other Near by places : Besant Nagar beach, Santhome beach, Vandalore zoo, Bharathiyar illam and Valluvar Kottam are few other places to visit.

Bus : Chennai is the only city in Tamil Nadu which is connected by a Golden Quadrilateral system. The four National Highways emerging from this city meets all other cities in India. In addition to this is the Chennai Mofussil bus Stand, which is the Asia's largest bus stand. There are surplus taxis, auto rickshaws and vans outside the bus stand.

Train : The Southern Railway's headquarters is housed in Chennai. There are two railway terminals, Chennai central which is meant only for Intra state trains and the other one is Chennai Egmore which deals with inter-state destinations. The Chennai suburban railway network provides access to destinations within the city. Metro rail has also been started in the city.