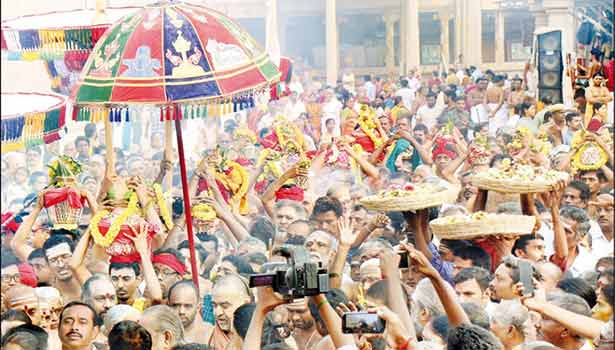 The most significant event, that is going to take place in the small area Tiruvanaikoil, in the south indian state Tiruchirapalli, Tamil Nadu is the talk of the state today. The consecration ceremony of the most popular Jembugeswarar temple in Tiruvanaikoil is scheduled on 12th December, 2018, and the city has been witnessing thousands of devotees for the past few days.

The historic significance of this temple has made this place a sacred center . Tiruvanaikoil is one of the five temples dedicated to Lord Shiva representing the FIVE cosmic elements and this temple is for “Water”. The presiding deity is in the form of a small Linga idol and the base of the idol is always wet due to the constant water base and He is also called “Appu Lingam”, as in Sanskrit, Appu means Water. 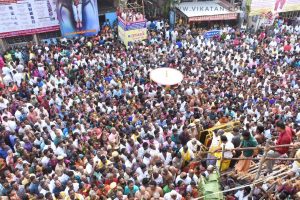 It is quite amazing to see that the Lingh idol in the Sanctum Sanctorium is partially or fully immersed in water all through the year irrespective of the water levels in the nearby river Cauvery. The architecture  of this temple is around 1500 years old , but still being witnessed as a testimony of the engineering knowledge our ancestors possessed. All you need is four to five hours of your time to witness the architectural wonder of the temple and particularly the mystic beauty of the hundreds of bilaterally symmetrical pillars built on both sides of the corridor on your way from Lord Shiva’s sanctum to his counterpart’s. The temple is so big that there are five streets surrounding the sanctum sanctorum. The outermost street of the temple is a circular path of four kilometers distance. People used to have a pilgrim walk covering the distance every month on a full moon day and it is quite interesting that the number of pilgrims increases month on month.

Another thing which makes us spell bound in this temple is the idol of the Goddess Akilandeswari which is one among the very rare huge statues found across the country. There is an interesting story behind. Since the time of inception, she was uncontrollably furious in olden days, punishing the devotees without any reason. Once, the Saint Adi Sankara, who introduced the Advaita principle to the world, visited this temple. Finding her so furious, he adorned her with two big ear rings by name “Thaadangam” and made her staying cool always and blessing her devotees with whatever they have wished for. You can witness those earrings even today. One more special event which you can never see in any of the temples in India is that, every day exactly at 12 noon, the priest in the shrine dresses up as Goddess Akilandeshwari and does the Pooja to Lord Shiva which is a feast to the eyes and you may get the chance of being greeted by an elephant too. 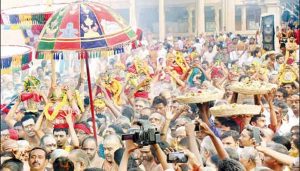 The legend says, there were a spider and an elephant worshipping Lord Shiva every day. As elephant saw the spider’s nest , it would clean it immediately with the water carried it in its tusk. And this routine continued for many days. When both met, the spider furiously went inside the elephant’s ears to trouble him and on account of this, both died. Historians say that the spider was the Chola King Kochengatkanan who built this temple and he  was very careful that no elephant can enter into the sanctum which is  unusual practice compared to the other Shiva temples.

The entire area has worn a festive look with the gorgeous decorations of all the shrines in the temple premises. Devotees from different parts of the state and country have thronged the city to attend this magnificent event. The celebrities popular in different fields have been visiting the temple and the nearby sacred monastery and offering their worships.

This festival has indirectly paved way for numerous small scale vendors who have emerged along the streets with their small shops attracting the children and the elders alike. The region around the temple has become a popular getaway for many. 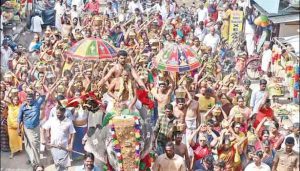 The exhaustive schedules for rituals and poojas are in place for the past one week. Special arrangements have been made by the local authorities for vehicles parking and dining. Even otherwise, there are number of small hotels around the temple, where you can finish all your three meals at a very reasonable price.

The four gateway towers on all the four directions, the sanctum of Lord Jembugeswara and Goddess Akilandeswari will be consecrated between 6 am and 7.30 am on 12th December,2018, which will be truly a significant event in this Trichy region and the state as well.

Cultural programmes, divine discourses, special poojas and rituals by the monastics, small shops around, free meals at select places are the highlights of the festival along with the ceremony being attended by the celebrities and Government officials.