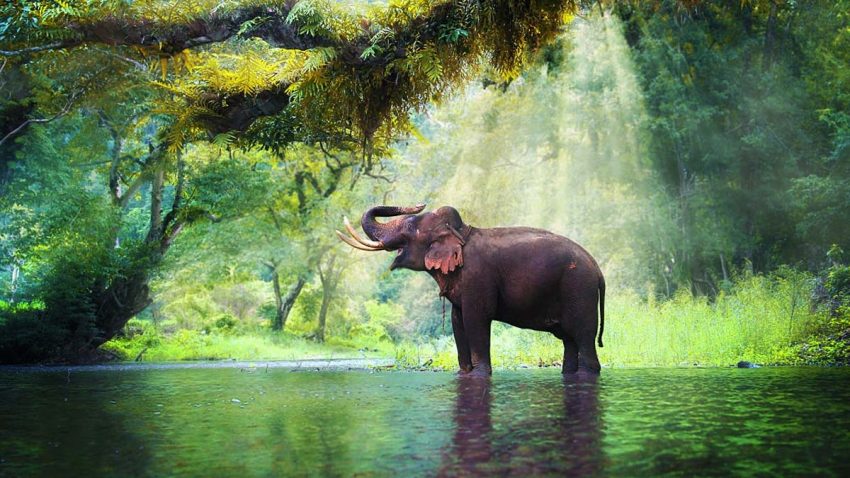 Nothing can beat the feeling of wonder and amazement escorted by the happiness and thrill of spotting wildlife in their own natural habitat. If you are an avid wildlife enthusiast and love spotting animals in the wild, you need not have to travel far as South India is a haven of fauna biodiversity. The lush green Western and Eastern Ghats mountain ranges and the densely populated forests of South India provide a safe habitat for a varied species of wild animals.

Owing to its overwhelming natural beauty and abundant wildlife wealth, South India is blessed with a countless number of Wildlife Sanctuaries and National Parks which are earmarked to conserve and preserve the natural heritage of the country. Wildlife sanctuaries refer to a natural habitat which provides protection and favorable living conditions to the wild animals and birds and are often owned by the government or private agency. On the other hand, National Parks are protected areas, established by the government to safeguard the entire ecosystem, including the landscape, flora, fauna, etc.

Here is a list of Top 10 Wildlife Sanctuaries and National Parks in South India to indulge in wildlife spotting:

Kabini Wildlife Sanctuary is one of the finest wildlife sanctuaries of South India, situated in Karnataka, which is best known for its bountiful wildlife species. It one of the rare places in the world where you can get an opportunity to spot Black Panther. It provides shelter to wildlife such as elephants, leopard, panther, sambhar, monkeys, bison, sloth bear, spotted deer, antelope, crocodile, and 250 species of birds.

A prominent wildlife sanctuary in South India nestled amidst the Nilgiri Hills in Tamil Nadu, the Mudumalai National Park and Wildlife Sanctuary is noted as one of the first forest range to be declared as a National Park. With a population of about 50 tigers, it was recently declared as a Tiger Reserve as well. Leopards, elephants, bonnet macaque, common langur, giant squirrels, flying squirrels, barking deer, mouse deer, etc are the other denizens of this Sanctuary.

Chinnar Wildlife Sanctuary is considered one among the twelve wildlife sanctuaries among the protected areas of Kerala. It is situated in Idukki district of Kerala and provides a natural abode to the Great Grizzled Squirrel of India, the most endangered species of its kind on the planet. Other inhabitants of this sanctuary include Indian Elephant, Panther, Gaur, Spotted Deer, Hanuman Monkey, Sambar, to name a few.

Situated in the state of Andhra Pradesh, Nagarjuna Sagar Wildlife Sanctuary is said to be one of the finest wildlife sanctuaries in India. Often referred to as Nagarjunasagar Srisailam Sanctuary, it is the largest tiger reserve in India. Nagarjuna Sagar Wildlife Sanctuary is home to a wide range of wildlife like langur, jackals and macaques, around 150 species of birds like grey hornbill and pea fouls and also reptiles like marsh crocodiles, monitor lizard, and soft-shelled turtles.

Once the hunting grounds of the Maharaja of Mysore, Bandipur National Park is one of the prominent national parks in South India as well as the best-managed parks of India, situated in the state of Karnataka. It is known for its varied wildlife boasting different biomes in the dry deciduous forests. Later it was established as a reserve under project tiger. Besides tiger, elephants, wild boar, hornbills, spotted deer, pythons, sloth bears, pythons, panthers, etc inhabit the park.

One of the most renowned national parks in South India, Periyar Wildlife Sanctuary and National Park is considered as the most protected area for the tigers and the elephants. It is located in Thekkady in Kerala and is the perfect example of nature’s bounty with rich biodiversity and great scenic beauty. Also being considered as the habitat of the elusive Nilgiri Tahr, Periyar Wildlife Sanctuary and National Park is a repository of rare, endemic and endangered flora and fauna.

Asylum for a wide variety of flora and fauna, Bannerghatta National Park is one of the renowned national parks in India, famously hailed for its tigers and lion safari. It is situated in Bangalore in the state of Karnataka which is home to many attractions like the country’s first Butterfly Park, Ten Reserve Forests of Anekal Range of the Bangalore Forest Division, Crocodile Farm, Snake Park, an Aquarium, a Zoo, Children’s Park, and Prehistoric Animals’ Park. Wildlife like Elephants, Asiatic Lion, Royal Bengal Tiger, Leopards, Jackal, sloth bear, India gazelle, etc is found here.

Explore the beautiful wildlife sanctuaries and national parks in South India and meet its wonderful wildlife residents that call them home.

Book a trip to South India with South Tourism and make sure you add these splendid wildlife sanctuaries and national parks in South India in your travel bucket list!

South Tourism offers you the best South India holiday packages and customized South India tour packages to treat you with an unforgettable vacation in South India.

Comment below which is your pick from the list of Top 10 Wildlife Sanctuaries and National Parks in South India.

Also, let us know in the comments below any other best wildlife sanctuaries and national parks that you know can be the best choice to visit in South India, other than our pick.