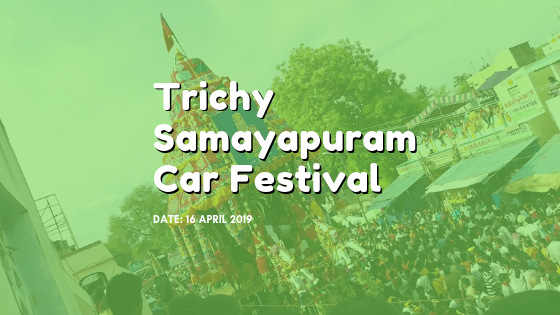 She is the Goddess believed to alleviate and prevent illness and she is most frequently homogenized with “Sitala”, the deity worshipped in the North and Central India as Goddess of Fever.Once the illness gets cured, people make offertory and it has become so voluminous that Samayapuram temple has become the second largest revenue generating one next to Palani.

The goddess is believed to be a superhuman force characterized by heat, anger and feverish vengeance. But at the same time, she is believed to be benign, gracious and generous, very much concerned about the justice, devoutness and proper conduct.

The Shakthi Sthal,Samayapuram temple is said to be in existence dating back to 17th Century where the deity was originally housed inside the Srirangam Temple. Later on, due to the varied differences in the procedures the two deities were worshipped, it was decided to shift the deity and house her in Kannanur,two kms away from Samayapuram, where even today she is worshipped as “Aadhi (Original) Mariamman. During the period of Vijayanagara Dynasty, this place was an army base. They believed that only by the grace of Mariamman, they had won in the warfront. So, as an act of gratitude, the King of Vijayanagara built the present one.

Out of all the year round festivals, small and big, celebrated here, The Poo Choridhal (Flower Sprinkling) and the Chariot Festival is of high religious significance. From the last Sunday of the Tamil month Masi, the Samayapuram Amman sits on fast and the regular foods like tamarind rice and other flavoured food are not offered to her and literally, the temple’s kitchen is shut down for a period of close to one month. Instead, buttermilk, porridge, fruits are offered to the Goddess. The science behind this can be, the devotees will follow the same food style to get over the scorching heat during this period and will not fall as prey to the heat borne diseases because of their faith that Goddess herself is offered only such foods !

The festival falls during March – April, and on every Sunday during this period, you can see tonnes of flowers are taken on procession to the temple by the devotees from the various neighbouring villages. This continues for an odd number of Sundays throughout the Tamil month Panguni. The highlight of the festival is the Chithirai Ther, that is the chariot festival which falls on the First Tuesday of the Chithirai month usually after the Tamil New Year festival. This year, the festival falls on 16th April, 2019. The entire region is packed with lakhs of devotees and the chariot is on a procession through the streets before halting for the devotees to worship. The night before the Chariot festival, all the roads leading to the temple are flooded with devotees approaching the temple bare footed. Devotees too sit on a fast and start their journey by foot to the temple. You can see most of them carrying the fire pots in their hands, their mouths pierced with lance and some of them have their body pierced throughout with lances and kept hanging on an open cart. These are some of the ways , the devotees offer this physical suffering as a thanks  giving to the Goddess Mariamman for having fulfilled their prayers embraced with her blessings.

The state and national highways approaching to Samayapuram temple are dotted with temporary sheds where food and water are offered to the walking pilgrims, sponsored by the devotees. Throughout night, wherever you stop, you will be offered fruit juices, ice creams, water, variety rice packets,butter milk, sweets in order to give you the energy to walk further. This is also a way of offering their gratitude to the Goddess through pleasing Her devotees.

The next day morning , the chariot with the idol of Goddess Mariamman in a gorgeous decoration, starts on a procession followed by lakhs of devotees and tourists. Excellent arrangements will be made by the local authorities to manage the crowd and offer them the necessary basic amenities. When the sun is about to set, the chariot comes back to its original position and the Goddess is kept for worship. There is also a legend that Goddess Samayapuram Mariamman is the sister of Lord Renganthar in Srirangam. So, during this festival, the gifts are sent to the Goddess from Her brother.

On ordinary days, when the crowd is reasonably less, when you enter Her Premises, you can see a protected dormitory for travelers and a commercial space for religious things. Adjacent to the temple, there is a hallway where the devotees who are very seriously ill stay till they get cured.There is a new marriage hall constructed for the benefit of the devotees. Now you are joining the queue to worship the most beautiful form of Shakthi, Samayapuram Mariamman. If you just watch the crowd waiting to see her, the social identity among the worshippers, the manifest of dancing and trances can be realized.

The deity inside the sanctum is made up of sand and clay. So, the conventional “Sacred Bath”, anointing (Abhishekam) is done only to the statue placed in front of her. At the moment you see her in the sanctum, you can understand why the crowd is so excited and emotional. Especially, pilgrims from Karnataka love to visit her as she resembles their Chamundeeswari Amman.

Samayapuram Mariamman is one of the very few Diasporic Deities whose heritage has spread beyond India in many countries. Indian natives migrated to countries like Singapore and Malaysia have built temples as a replica of this and celebrate all festivals as done here. The list includes Sri Lanka, Paris, Durban(South Africa), and Detroit(US) also.

Come and enjoy the grand car festival of Samayapuram Mariamman, an icon of Trichy, drawing devotees and tourists from every corner.