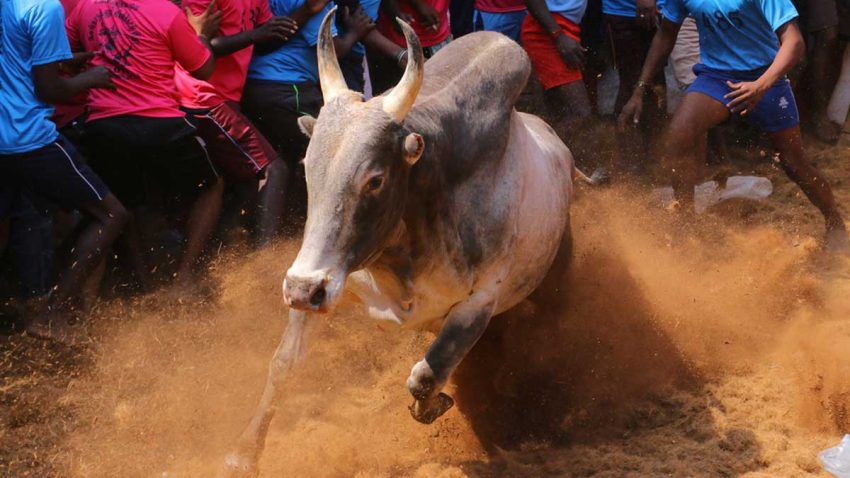 The vibrant past and present of Jallikattu – a Quick Overview:

Tamilnadu, the world’s one of the ancient lands with the longest surviving civilization has been a forerunner with many traditional practices adhered to even in this modern era. Rows of festivals for every season have been celebrated as a measure of preserving and nurturing the communal harmony and peace among the Tamils rejuvenating the spirit of unity and togetherness.

Though Tamil Nadu is popularly known as the Land of Temples in the Tourism front, Agriculture is the baseline of Tamilnadu and out of all the festivals, Pongal has strong emotional connectivity with the people of Tamil Nadu. The entire state celebrates this as Harvest Festival while in the other parts of India, this is in the name of Makar Sankranthi. During mid-January, either on 14th or 15th, Pongal Festival is celebrated. Scientifically, this is the day, the sun changes its direction and starts moving towards the North. The farmers of Tamil Nadu, thank the Sun for good harvest yielded and special poojas and rituals are done to Sun God.

The villages of Tamilnadu turn colorful during Pongal Festival with the houses decorated gorgeously without diluting the traditions. Sugar canes, sweets made of rice and pulses are unique to Pongal, adding fervor to the festival. Early in the morning on the day of Pongal, colorful Rangolis are seen everywhere with special poojas and offerings to Sun God.

Part of an annual repertoire during Pongal, the traditional festival celebrated in Tamil Nadu is Jallikattu, taming the Bull. There has been N number of controversial theories on this single issue, but the undeniable fact is that Jallikattu is one of the longest surviving warrior sports in Tamilnadu.

How old is the tradition of Jallikattu in Tamilnadu?

Jallikattu has got strong references in the literature dating back to the Sangam Age (400 BC – 300 AD) and the sport has been elaborately described in the Sangam Literature Kalithogai, an anthology of 150 poems, composed in 200 BC. Traditionally, the sport Jallikattu is termed as “Yeru Thazhuvudhal”, Yeru means the Bull and Thazuvudhal means hugging.

Further, the ancientness of this sport has been revealed during the excavations in Mohanjo-Daro, depicting the scene of taming a bull that existed during the period of Indus-Valley Civilization. Despite the protests by animal rights activists, this one illustration shows the longevity of this sport in Tamil Culture.

Kalithogai describes the scenes from the Jallikattu grounds which we can visualize the sport celebrated thousands of years ago.

“Amidst the crowd of people standing in the ground, the bull comes out and runs furiously and a man in the crowd rose to hold the hump, neck and finally the head of the bull. The bull initially agitates and tries to push the man down, but later gets tamed with the continuous effort by the man. The entire crowds become happy”.

Thus, the warrior sport was encouraged and nurtured reinstating the significance of bulls and their connection to agriculture and in turn to mankind.

Curious to know the reason behind the name Jallikattu?

Jallikattu is actually a combo of two Tamil words, Sallikkasu (coins) and Kattu (a package). The pocket of coins tied to the horns of the bull should be secured successfully by the warrior by taming the bull. This sport was earlier referred to as Yeru Thazhuudhal and it continued till the period of Nayak Rulers and from then on, the name got modified as Jallikattu.

What happens at the Jallikattu festival?

Jallikattu is celebrated on the third day of the Pongal festival, the celebrations for a good harvest and thanksgiving to Sun God for such a good yield. Basically, the agrarian society of Tamil Nadu has a strong emotional bonding with Bulls, the masters on the fields for cultivation. As every other house in Tamil Nadu is an agrarian family, the bulls and cows in the houses are also worshipped during this festival.

The open grounds in the villages will be selected for this Jallikattu festival. Onlookers from nearby villages assemble at the ground. The bulls are let out through a small entrance called “Vadivasal”. The male players waiting outside try to catch hold of the bull’s hump, which requires a lot of courage and caution, leading to severe injuries and fatalities if handled otherwise. One who holds the hump and takes the pouch filled with cash or gifts without falling off from the bull is declared as winner.

Variants and Rules of Jallikattu:

Jallikattu also called as Manjuvirattu, the ancient sport of Tamil Nadu is conducted in different styles and practices across the different regions of the state. Few of them are,

Vadi Manjuvirattu – The traditional way of releasing the bull through a closed space called Vaadivasal, from where the male warriors will try to hold the hump.

Veli Manuvirattu – Thee bulls are led openly into the ground from where the actual show begins. This kind of bull-taming is quite popular in the villages of Sivagangai and Madurai.

Vatam Virattu – in this type, the bulls will be tied with a rope of length 15m and they are allowed to move freely. A Group of people will try to catch hold of the pouch tied to the horn.

Interestingly, the contestants will be disqualified from the sport if they fail to hold the hump and they just hold the neck, horns or tail. Also, they have to stick on to the hump for a minimum period of 30 seconds or for a distance of 15 metres, to get qualified as a winner. If the contestant is thrown down by the bull, there ends his chance.

It is an undeniable fact that the crisis for agrarianism, rapid urbanization, diminishing lines of difference between rural and urban creates a fear that a Tamil Village will be nostalgic. Over the years, the dimensions of the sport are changed at different fronts influenced by various socio, political and economic factors reflecting at all sects of the society. But a consoling fact is the emotional connection between the bulls and the humans remain strong in Tamil Nadu.

Though the families in the agrarian culture since many generations have quit the game and stepped into the technical world as engineers and doctors, the younger generation has not got fully disconnected from their roots. Thousands of young men and women living in cosmopolitan cities in India and abroad visit their hometowns to take part in the traditional Pongal festival followed by the most awaited Jallikattu. This keeps them going for the next one year rewinding the moments of unforgettable memories.

Do you know the places in Tamilnadu where Jalikkattu is vibrantly celebrated?

With centuries-old, long social and cultural history, Jallikattu is celebrated in and around the districts of Madurai, Trichy, Pudukottai and Sivagangai. Taming of the Bull is a reaffirmation of the pride among the Tamils across the world, which carries a very old culture and tradition.

Alanganallur, Avaniapuram are the most popular among all the places.

A warrior sport, symbol and pride of Tamil tradition, celebrated since the classical Sangam Age of Tamil Nadu, the Yeru Thazhuvudhal or Jallikattu or Manjuvirattu still retains its charm and glory bonded with an eternal emotional connect between man and animal, a unique culture of Tamil Nadu, which you can never find in any part of the world.

Plan to visit the epicenters of Jallikattu during your visit to Tamil Nadu this time.

For a personalized tour plan to Tamil Nadu, we will be the happiest to assist you. You can ping your travel interests at [email protected]

To know more about us, visit www.southtourism.in, your ideal travel partner.