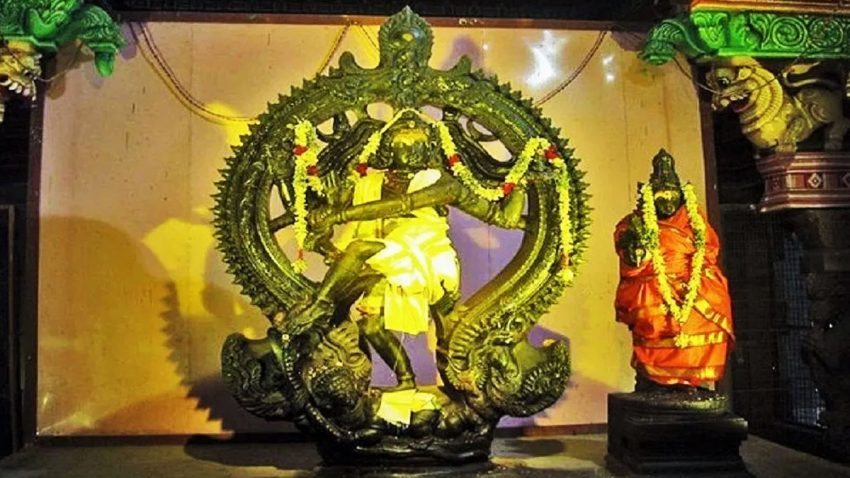 A Complete Guide About Arudhra Dharshan in 2020

The annual festival celebrated pompously in all Shiva temples is Arudhra Dharshan, worshipping Lord Shiva installed in the dancing posture as Lord Nataraja. Saivism considers worshipping Lord Shiva in his dancing form is very auspicious. Epics say that on the day of Thiruvadhirai star during the Tamil month Margazhi, Lord Nataraja performed his cosmic dance and that is the reason, the day is celebrated in a very elaborate manner.

As per the codifications of Shiva Temples, the statue of Lord Nataraja can be anointed for only SIX times in a year and out of that, Arudhra Dharshan is considered to be very special. The Tamil month Margazhi itself is a month known for spiritual activities. People visit temples and you can find religious discourses, preachings, special poojas wherever you come across in South India. Margazhi is equally adored by both Saivism and Vaishnavism.

Arudhra Dharshan is most popular in the small hamlet Uthirakosamangai in Ramanathapuram district of Tamilnadu. The Uthirakosamangai, Mangalanatha Swamy temple is one of the most famous and prominent Shiva temples in Tamilnadu. The presiding deity is in the form of Lord Nataraja and the most surprising fact is that the five feet tall idol is a made up of monolithic emerald stone. It is a million-dollar question yet to be answered that where was the source for such a huge stone some three thousand years ago in such an extreme drought area. This shrine has yet another significance that this is the place where Lord Shiva taught the Vedas to Goddess Parvati.

Due to the radiating properties of Emerald, the idol is covered with sandal paste throughout the year and only on the day of Arudhra Dharshan, the devotees can witness the original idol of Lord Nataraja. The elaborate poojas and rituals done to the emerald idol are unique and spectacular to behold. The small town is flooded with devotees and tourists on this day because they need to wait for one more year to have the wonderful darshan of Emerald Nataraja.

There are FIVE temples popularly known for the dance form of Lord Nataraja and they have been listed as Chidambaram, Madurai, Tirunelveli, Kutralam and Tiruvalangadu. These temples are also called as Por Sabai, Velli Sabai, Tamira Sabai, Chitra Sabai and Rathna Sabai respectively.

(Click here…) to know more about Uthirakosamangai Temple in Ramanathapuram

The auspicious day falls between December and January and this year 2020 , Arudhra Dharshan is celebrated twice on 10th January 2020 & 30th December 2020.

Though all the Shiva temples celebrate this festival, Chidambaram Natarajar Temple tops the list with a ten days long poojas and rituals done very elaborately on account of Arudhra Dharshan and the festival is known as Margazhi Brahmotsavam.

In Saivism, the word “Koil” means the temple, simply means the Lord Nataraja temple at Chidambaram. The temple boasts a wonderful architecture with a sprawling campus and beautiful towers. Every year the Margazhi Brahmotsavam in Chidambaram Natarajar temple is attended by thousands of tourists and devotees from far and wide of the country.

With the flags hoisted marking the beginning of Margazhi Brahmotsavam, the deities are taken in processions and every day, there are special events conducted in the temple premises. The ninth day of the festival is very significant that the dancing idol of Lord Nataraja is taken to the hall known as Por Sabai (Gold). Chidambaram Thillai Nataraja Temple is also known as Pancha Bootha Sthalam representing the cosmic element sky.

On the day of Arudhra Dharshan, hours-long anointing is done to the idol with thousands of devotees worshipping the cosmic dancer. After the anointing, decorations are done and Rahasya Pooja is also done behind the screen, as it is a customary ritual, the deities are kept for the darshan by public. With the poojas on the last day, the festival comes to an end. This temple is a site for performance arts, including the annual Natyanjali dance festival on Maha Shivaratri.

The grandeur of Meenakshi Amman Temple at Madurai is most popular among the global travelers. The temple premise with thousands of sculptures is wonderful to explore the vibrant history of the Pandya Kingdom who ruled Madurai, world’s one of the oldest cities with the longest surviving civilization. One of the five sabhas dedicated to Lord Nataraja, Madurai Meenakshi Amman temple holds the privilege of being called as Velli Sabhai (Silver).

You can find the uniqueness of Lord Nataraja in this temple that he dances with his right leg raised and the left leg on the ground which is quite opposite to that of the posture in all the other temples. Historians record that the God himself changed the leg’s position in response to the request to the then Pandya King Rajasekharan, described as “Kaal Maatri Aadiya Puranam” (enactment of Lord Shiva changing His leg position) in the great Saivaite canon Tiruvilayadal Puranam.

On the day of Arudhra Dharshan, the five idols of Lord Nataraja with their consort Goddess Sivagami are taken on a procession along the four streets called Masi Veedhi around the temple. Thousands of devotees from the nearby villages throng into the Madurai city to witness the festival and the processions.

The inner precincts of the Tirunelveli Nellaiyappar temple contain the brilliant artworks amidst which the idol of Lord Nataraja is placed. The temple itself so ancient that it is a 700 years old shrine and the deity is praised with the hymns by one of the four Saivaite saints Tirugnana Sambandhar.

There are many festivals are celebrated here like Navaratri, Thaipoosam, annual temple chariot festival, etc, but Arudhra Dharshan is a prominent festival in this temple which throng thousands of devotees from all across the world. The processional deities of Lord Nataraja and his consort Goddess Sivakami are brought to the dancing stage. The detailed rituals and poojas are done for both deities. The significance of this stage is that, adjacent to this place is the shrine of Sadhana Sabapathi, the deity covered with sandal paste. When walking towards the stage to worship the deity, you can behold the beauty of both the idols, which is truly a spectacular one.

The Kutralanathar Temple in Courtallam has got high religious significance as this is the place where Sage Agasthya installed a Shiva Linga idol to balance the weight of the crowd assembled to witness the celestial marriage of Lord Shiva and Goddess Parvati in Mount Kailasa. Kutralam represents one of the 5 Pancha Sabhas of Lord Nataraja – Chitra Sabhai(Art).

Chithira Sabhai(Art) in Courtallanathar temple at Courtallam (Chitra – painting) is located adjacent to the temple where a hall is full of mural paintings and artworks. The dancing stage is termed as Chithira Sabhai where the processional deities of Lord Nataraja and his consort are taken on the day of Arudhra Dharshan for special religious rituals. Thandava Deepa Aradanai is the significant event of the rituals.

Courtallam/Kutralam is a renowned tourist destination which is known for its famous temples, waterfalls originating from the Western Ghats and amidst picturesque surroundings. Kutralam is also famous for its source of inspiration for many literary works.

A small town in the suburbs of Chennai City, Tiruvalangadu deserves a special mention here for the most important shrine for Lord Shiva. Sri Vadaranyeswarar Temple is regarded as a sacred Shaivaite temple and it is one of the 5 majestic cosmic dance halls (pancha sabhai) of Lord Shiva, known as “Ratna Sabai”. From the temple inscriptions, we can infer that the temple dates back to the 5th century and is one of the most important Sakthi Peeth. This temple is one of the shrines of the 275 Paadal Petra Sthalams.

The shrine has so many other significant events to its credit. This is the place where there was a clash between Goddess Parvati in the form of ferocious Kali and Lord Shiva who competed with their dance performances. The cosmic dance of Lord Nataraja here is called Urthuva Thandava, as he danced with full vigor and fury. This is the shrine where Lord Shiva addresses his devotee Karaikal Ammaiyar as Amma and she witnessed the cosmic dance in an upside-down position and she entered into the eternal bliss here.

Almost all festivals related to Lord Shiva are observed in this temple, Shivarathri and Arudhra Dharshan (Margazhi Thiruvadirai) are the festivals celebrated in a grand manner in this temple with thousands of devotees participating in the hours-long rituals and special poojas. This temple is considered to be a place where one can attain salvation.

Be a part of this vibrant festival on your visit to Tamil Nadu and witness the “Arudhra Dharshan“, the cosmic dance of Shiva, a retreat to the mind and the soul.

Book a trip to Tamilnadu with South Tourism and make sure to add these temples in Tamil Nadu to get the blessings of Lord Shiva in this New Year 2020!