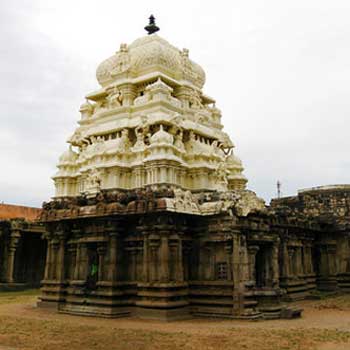 Thiru Uthirakosamangai is a renowned Shiva temple believed to exist from 3000 years ago. The presiding deity Managalanathar is believed to have preached the meanings of Vedas and other auspicious secrets of Hinduisms to His consort Managalambigai at this holy place. The temple and its glory are found to be mentioned in various literatures and Saivaite canons.

Apart from the antiquity of this temple and its specialities, yet another most significant aspect of this temple is the Lord Nataraja idol. Lord Nataraja is considered to be the dancing form of Lord Shiva. The unbelievable fact about this idol is that Lord Nataraja stands as a six feet tall statue carved out of a single emerald stone. Dating back to around three thousand years, the source and means for such a precious statue are still a mystery.

Lord Nataraja is covered with sandal paste throughout the year as Emerald has the scientific property of its molecules getting disturbed when exposed to light and water. Once a year, on the day of Thriuvadhirai Star during the Tamil month Margazhi, Lord Nataraja can be worshipped without the sandal paste. This year the significant event happens on 2nd January 2018. Day long rituals and anointing with different aromatic materials are carried out on this auspicious day and this special dharshan is called Arudhra Dharshan. Thousands of devotees throng the temple on this sacred day to worship the Emerald Nataraja and seek His blessings.

Besides the wonderful Lord Nataraja and Lord Mangalanathar, there exists a separate shrine for the Goddess Mangalanayaki. The façade of the temple is with a seven tiered gateway tower. Near the entrance, there exists a statue of the mythological creature called Yali. It is with the face of lion with human’s body. A huge stone ball rolls around inside this yali’s mouth, but no one can take the ball out which is an engineering mystery.

Further to the wonders of this world, there is a separate shrine in this temple where 1008 distinct idols of Shiva Lingams are found and they are called as Sahasra Lingam. They are considered to be the ardent devotees of Lord Shiva who surrendered themselves at His feet. The ber tree, the different water bodies present inside and outside the temple premises deserve a special mention here. Lord Managalanathar accepts the Fragrant Screw Pine Flower during poojas and decorations which is a prohibited flower for rituals in all other Shiva Temples throughout the world.

Come and get the blessings of Lord Nataraja on this Margazhi Thiruvadhira Arudhra Dharshan Day !

The temple is kept opened from 6AM to 11AM and 4PM to 8PM. The closing time gets extended during special days like Shivarathri, Pradosham and other days.

Thiru Uthirakosamangai is at a distance of 17km from Ramanathapuram in the down south of Tamil Nadu. One can reach this place easily either from Madurai or from Trichy.

The nearest airport to this place is Madurai and from there the temple is at a distance of  110kms. The nearest railway station is at Ramandhapuram.