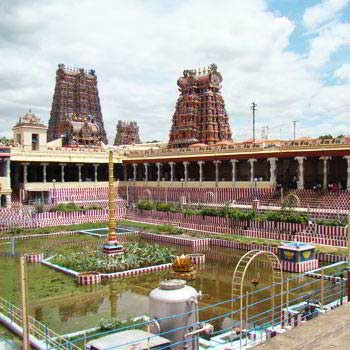 The famous meenakshi shrine is located in Madurai City in the down south of Tamil Nadu is the temple complex which will make you spell bound with its 14 tower gates called Gopurams and the architectural elegance of appearing in a series of quadrangular precincts arranged in a perfect manner. The Meenakshi Amman temple in the sleepless city called Madurai has been witnessing a minimum of 15,000 visitors per day generating a revenue of $60 million per year.

Meenakshi Amman temple is one of the very few temples in India where the first reverence is given for the Goddess Meenakshi. She is blessing her devotees with her beautiful eyes likened to that of a fish and the very reason she is called as Meenakshi (In tamil, Meen refers to Fish). The presiding deities are Goddess Meenakshi and Lord Sundareswarar. The temple is believed to exist from the 14th century constructed during the Pandyas Dynasty. Once there was a King called Malaiyatvaja Pandian ruling Madurai. He had everything in his life except for a child. So, he was trying to please the Almighty with all possible rituals and during one such function, a girl child appeared out of the fire. She was very beautiful but with three breasts. Both the parents were shocked to see her and at that time there was a voice from the heaven telling them not to worry and the third breast will disappear when she meets her future husband for the first time.

The girl was christened as Thadathagai and grew learning the 64 forms of arts. When she went to the places of Brahma, Vishnu and Indra, the celestial deities, she was able to defeat them very easily. But when she entered the abode of Lord Shiva, she could not fight with him and her third breast disappeared. Both of them realized that they had marry and returned to Madurai. The marriage celebrations of Meenakshi and Sundareswarar is said to be the Grandest event on Earth happened so far. Even today the marriage celebrations are conducted in a pomp manner during April-May called as Chithirai Thiruvizha and on that auspicious day of the celestial marriage, one million people assemble at Madurai to attend the wedding celebrations.

The temple has been redesigned by the Nayak Kings in such a way that the entire Madurai City is around the sanctum of both the presiding deities. They are perfect in structure and looks like from the central part of the flower, the petals are symmetrically extending on all the four sides. Even today, the streets are retained with the names of Tamil months as Avani-Moola Veedhi, Chithirai veedhi, Aadi Veethi and the like. The temple is said to have 33,000 sculptures housed in different halls constructed by various Kings of Pandya and Nayak Dynasties. The temple has enjoyed various offerings and endowments from the Kings who have in turn enjoyed Her mercy.

The places of interest to visit in this temple are the different halls named as Kilikoondu Mandapam, Kambathadi Mandapam, Puthu Mandapam, Mudali pillai mandapam and Mangaiyarkarasi mandapam. The religious significance of this temple is that, Goddess Meenakshi is holding a parrot in her hand. Normally parrot is associated with Andal, an Azhwar saint. Another religious significance is that this is the only temple where Lord Nataraja is performing the cosmic dance with his right leg which can never be seen in any other Shiva temple.

The temple tank is called as Tank of Golden Lotus, in Tamil, it is called as “Potramarai Kulam”. The tank is believed to be the approving authority of any newly written literature. If the work is authentic, it will float on the tank, otherwise, it will sink. Thirukkural has been staged in this tank by Thiruvalluvar 2000 years ago.

Come and enjoy the grace and benevolence of Lord Sundareswarar and His consort Meenakshi Amman blessing the devotees in this 2500 old city Madurai !