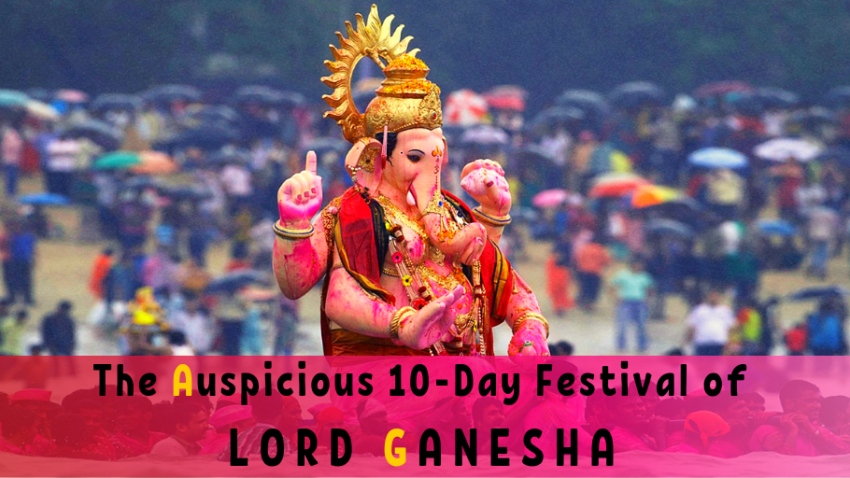 The youngest son of Lord Shiva and Goddess Parvathi is known by 108 different names. There are countless prankster tales of Lord Ganesha still spread and shared in the South India homes. Associated more often with the red color, Lord Ganesha’s fictional features such as the elephant-head, a broken tusk, huge ears, four hands holding a pasam, characteristic pot belly, laddus, goad, and a pot of rice distinguish himself from other Hindu Gods. The blessings of Lord Ganapathy is earned during shop openings, house warming functions, and anything that wishes a beautiful start. Since he is seen as the destroyer of obstacles. It is believed that praying him brings an individual and his or her family good fortune, prosperity, and spiritual knowledge.

Beginning on the fourth day of the waxing Moon, this Hindu festival is celebrated by everyone for its colorful events and pomp. It begins on the Shukla Chaturthi (4th day) and goes till Anant Chaturdashi (14th day) celebrating the re-birth of Lord Ganesha. Brahma Vaivarta Purana, Ganesha Khanda chapter explains about Lord Ganapathy’s resurrection in a detailed way.

The Mythological Story behind the Resurrection of Guardian Ganesha

It is widely believed that Goddess Parvathi once created a guard out of sandalwood to safeguard her house. As she was bathing in the nearby lake, guardian Ganesha had stopped the entry of the unknown intruder Lord Shiva. Out of anger, Lord Shiva chopped the head of Guardian Ganesha and later came to know about the whole event from Goddess Parvathi. To eliminate the grief of his beloved, he ordered his Ganas or attendants to bring the head of the first animal sleeping, facing the North. The first creature they encountered was an elephant. Thus, Lord Shiva resurrected Ganesha. He became Lord Ganesha, the Vighnaharta, the Problem Solver of Devas and Vignakarta, the Problem Creator of Rakshasas. The Chief of Lord Shiva’s Ganas or attendants.

Devotees wishing to install the statue of Lord Ganesha should clean their house thoroughly and fill the Kalasha with water, decorate with betel leaves, and coconut on top of the Kalasha. The Ganesha idol is placed at the same height and the revered “Janve”, the sacred thread is put across his shoulder. The sandalwood paste is applied on his forehead along with garlands. Red flowers and Durva Grass are applied to Lord Ganesha while chanting mantras from Rig Veda. The Ghee lamp is lit and “Modaks” are offered to Lord Ganesha.

History of the Festival and Happenings on the Streets

The unaccounted time of this festival dates back to 271 BC and 1190 AD when the Rashtrakutas and Chalukyas dynasties were ruling. However, the pompous events began during the period of Chhatrapati Shivaji around 1600. Lord Ganesha was the deity of their clan. Bala Gangadhar Tilak made this a grand event to create an opportunity for people to mingle with each other.

Starting on the first day of the festival, sculptors get ready to create beautiful clay models of Lord Ganesha in various sizes. Even statues of height 70 feet are kept in well-designed Pandals. Some pious devotees of Lord Ganesh undergo celibacy, abstinence from drinking and other bad habits throughout the 10 days. The soulful energy of devotional chantings, the smell of the favorite food of Lord Ganesha – “Modak”, and colorful streets with a huge gathering of positive-minded people will set the scene of one of the greatest cultural events of all time.

The clay models of Lord Ganesha are taken in huge processions like a parade dancing and singing. Finally, it is dissolved in the nearby river or sea. Scientifically, it restores the texture of loose soil, thus maintaining the steady flow of water. The most famous Lord Ganesha celebration in Mumbai include the Lalbaugcha Raja in Lalbaug, GBS Seva Ganesh Mandal in King’s Circle, Ganesh Galli Mumbaicha Raja, Khetwadi Ganraj in Girgaum, and the Andhericha Raja in Andheri. The oldest one established by Bala Gangadhar Tilak in 1893 – The Shree Sarvajanik Ganeshotsav Mandal at the Keshavji Naik Chawl is regarded as a symbol of unity among Indian folks to date.

While the festival is celebrated from nine to twenty-one days in Goa, the thing to notice is the canopy or Mattioli in which the idol is placed. It is made of fruits and vegetables in an organic way. Women fast during this sacred occasion and dance for folk numbers in groups. It is known as “Vinayaka Chaturthi” in South India and “Gowri Habba” is celebrated one day before for Goddess Parvathi. Modaks are called kozhukkatta in Tamil Nadu, Kadubu in Karnataka, Modakam or Kudumu in Andhra and “Panchakajjaya” (a sweet made of sugar, desiccated coconut, ghee, gram dal, and sesame seeds) is a special sweet offered for Lord Ganesha in Karnataka. “Lamboodhara Piranalu” is the name given to Ganesh Chaturthi in Kerala

The lucky localities to catch up with pompous celebrations are close to the Karpaka Vinayakar Temple in Tiruppathur (Tamil Nadu), Kanipakam Vinayaka Temple in Chittoor (Andhra Pradesh), Bangalore Ganesh Utsav in Basavanagudi, Bengaluru, Karnataka, and Khairatabad Ganesh in Khairatabad, Hyderabad, Telangana. The event is so popular that it is even celebrated with the same pomp and galore in Canada, Mauritius, USA, the UK, Nepal, and Trinidad. Hope! This festival cleanses our heart and soul and eliminates negativity from our minds.