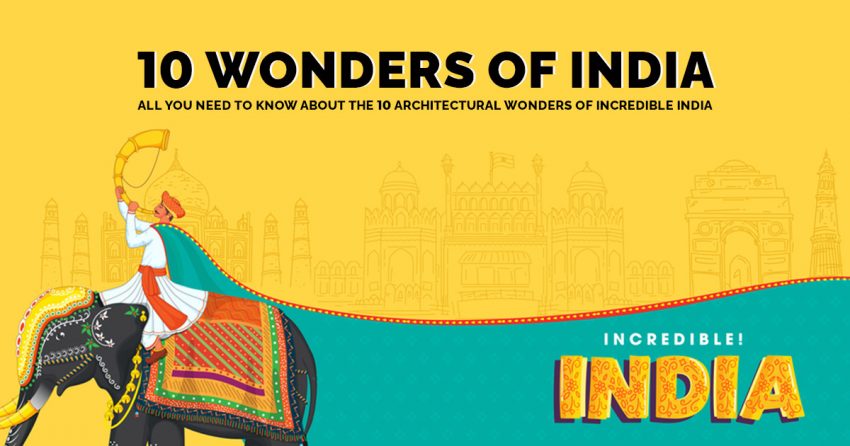 Exploring India is like exploring worlds within worlds. The landscapes, culture, people, etiquette, language, dressing styles, food, are all different at different destinations in this incredible country. In fact, our whole life is not enough to explore the whole of India, because India is as much as rich and varied and so are the wonders this amazing land boasts of. So many are the natural and architectural marvels this incredible land is blessed with that make up the wonders of India.

In this blog, we are presenting you with the 10 Architectural Wonders of Incredible India. The mesmerizing architectural marvels/monuments of India not only reflect its culture and diversity but also act as a time machine taking you back to the past, speaking tales of either declaration of love or portraying life during ancient times. With each monument exceptionally stunning with its exquisite architecture and vibrant history, we were left with the strenuous task of short-listing the top 10 that you absolutely must-visit.

Here is our list of 10 Wonders of Incredible India! Check out:

An exceptionally beautiful and amazingly built Indian monument that makes a timeless epitaph of a husband’s eternal love and affection for his wife, the iconic Taj Mahal has huge fans all across the globe.

This magnificent ivory-white marble mausoleum was built by the Mughal Emperor Shahjahan for his beloved wife Mumtaz. Undoubtedly, people who have never heard of the Taj Mahal is quite rare.

An iconic symbol of love and exquisite grandeur, the Taj Mahal is a unique man-made manifestation of the glorious Mughal age and not only a wonder of India but also considered as one of the seven wonders of the world in the modern era. Portraying a unique blend of Hindu and Indo-Islamic architecture, it took around 22 years to complete the Taj Mahal. This mesmerizing monument stands along the banks of the Yamuna river in Agra, attracting about 3 million visitors every year from all around the world.

The beautiful and highly revered Golden Temple or Sri Harmandir Sahib in Amritsar is a fabulous spiritual center of the Sikh religion in the country.

An embodiment of human brotherhood and equality, the Golden Temple welcomes everyone, regardless of caste, creed, or religion to seek spiritual solace and religious fulfillment without any hindrance.

Built-in white marble and inlaid with precious and semi-precious colourful stones, the spectacular Golden Temple is definitely one of the architectural wonders of India which displays a unique Sikh architecture whose top half is covered in almost 400 kg of pure gold leaf. The sparkling temple is surrounded by the pool of nectar, Amrit Sarovar whose waters are said to have healing powers.

Marked by numerous ruined historical edifices, structures, and temples; history and mythology come to life in Hampi which was once the capital of the wealthy and prosperous Vijayanagara Empire.

Though in ruins, the magnificent structures in Hampi continue to marvel the world with its grandiose and brilliant artistry of the bygone era. This beautiful and idyllic ancient city stands on the banks of the mighty Tungabhadra river in the state of Karnataka.

A renowned UNESCO World Heritage Site, Hampi is a delight for travellers all over the world. The spellbinding ‘Virupaksha Temple’, along with the astounding ‘Vijaya Vittala Temple’ with its iconic stone chariot shrine and the musical pillars that emit unique musical tones, as well as the amazing ‘Achutaraya Temple’ with its ornamentally carved pillars, make Hampi a remarkable wonder of incredible India.

People from far and near come here to witness the richness, intricate details, symbolism, and expressiveness of ancient Indian art, first hand. Out of the 85 original temples in Khajuraho, only 22 have survived the weathering of time to constitute one of the world’s great artistic wonders. Cradled by the Vindhya mountain range and snuggled amidst dense forest, this stunning architectural wonder of India is situated in Madhya Pradesh.

The gigantic statue of the Bahubali King, Gomateshwara who renounced his kingdom and became a Jain monk, eventually attaining moksha or liberation is yet another architectural wonder of India, built out of a single rock monolith.

He is considered the first Tirthankara and the founder of Jainism. Perched atop a height of 3350 above sea level, this 57-foot tall, colossal statue is located at Shravanabelagola, one of the sacred sites for Jains in India.

The majestic statue of Gomateshwara resting high up the Vindhyagiri Hill catches one’s attention even if you are 30 Km away and is said to be the world’s tallest monolithic statue. The statue is in Digambara (nude) form, standing straight in the posture of meditation known as Kayotsarga, symbolizing one’s victory over earthly attachments and desires that hamper their spiritual ascent towards divinity.

Reckoned as the world’s first completely residential university, Nalanda was one of the most prominent centres of learning in ancient India from 5th CE to 12 CE. In its high time, the University had the capacity to accommodate about 2,000 teachers and 10,000 students.

Nalanda flourished in all its glory till the 12th century and was eminent enough even to attract students and scholars from faraway lands such as China, Korea, Japan, Tibet, Mongolia, Turkey, Sri Lanka, and South East Asia, after which it declined and was ultimately abandoned.

Situated in the historical city of Rajgir in Bihar, Nalanda is greatly valued for its rich collection of scholarly material and manuscripts. The great library of Nalanda University was also very famous. Nalanda was the leading centre of teaching Mahayana Buddhism but also featured other topics of education. What made Nalanda stand unique is the holistic nature of knowledge that was sought and imparted at this University which indicated a seamless co-existence between nature and man, and between living and learning and it is clearly evident from the architectural components of the Nalanda ruins.

One of the outstanding architectural wonders of India, the Konark Sun Temple is built in the shape of a gigantic chariot of Sun God led by seven horses evoking its movement across the heavens. The spectacular temple is carved out of sandstone and has 12 wheels on each side to support the colossal structure with a set of spokes and elaborate carvings.

Also known as the Black Pagoda, the Konark Sun Temple is a UNESCO World Heritage Site of India. Dedicated to Sun God, Surya, this spellbinding temple is situated in the eastern state of Odisha, near the sacred city of Puri. A repository of art forms, Konark Sun Temple reflects the traditional style of Kalinga architecture. Despite the fact that much of its structures failed to survive the test of time, the Konark Sun Temple still inspires marvel and fascination.

They are a part of the UNESCO World Heritage Site that proudly stands as a testimony to the architectural splendour and beauty of Chola art, architecture, and sculpture. The wall of these spellbinding temples is covered in exquisite carving, inscriptions and paintings which speaks volumes about the skilled artisans at that time. These ancient temples of the Chola empire still stick to the age-old rituals and festivities and hence the name “Great Living Chola Temples“. They form an intrinsic part of the Tamilian heritage, reflecting their culture and ethnicity.

One of the most exotic caves of India depicting India’s architectural brilliance in the past, the Ajanta and Ellora Caves are declared as the World Heritage Site by UNESCO.

The Ajanta Caves are a series of 30 rock-cut cave monuments which displays Viharas and Buddhist monasteries while Ellora Caves constitutes a set of 34 rock-cut religious centres for Hindu, Buddhist, and Jain.

Located in the Aurangabad district, the Ajanta and Ellora Caves are the star attraction of Maharashtra. This ancient Heritage site houses some of the finest Indian murals and sculptures that are carved out of stone using only a hammer and chisel. The awe-inspiring paintings depicting the life of Gautam Buddha, and also stories from Jataka Tales are the main attraction of Ajanta Caves. The Kailasa Temple inside Ellora Caves, dedicated to Lord Shiva is the largest monolithic rock-cut temple in the world which fascinates the tourists visiting here. The Kailash Temple at Ellora Caves is such an outstanding engineering marvel in the world that it is really hard to believe the rock is scooped out top to down to create a chariot shaped temple.

The Statue of Unity, built as an ode to the Iron Man of India, Sardar Vallabhbhai Patel is the latest engineering marvel of India. This colossal statue having a height of about 182 meters is the world’s tallest free-standing statue. Towering over River Narmada and overlooking the sprawling Sardar Sarovar Dam, the Statue of Unity is just another jewel to the crown of Gujarat.

It is one of the projects that have been commissioned and completed in record time, in just 46 months. The construction of the statue started in October 2013 and was inaugurated by Indian Prime Minister Narendra Modi on 31 October 2018, the 143rd birth anniversary of Sardar Vallabhbhai Patel.  The Statue of Unity was designed by Indian sculptor Ram V. Sutar. It has now emerged as one of the most favourite tourist spots of India which feature an in-house museum, laser light and sound show, children’s nutrition park, dino trail, and many more to fascinate the visitors.

The incredible land of India is full of wonders that have glorifying architectural allure. These are just a few of them, recommended by us which are really fascinating and worth visiting.

Book a trip to India with South Tourism and make sure to add these 10 Architectural Wonders of Incredible India to your travel bucket list for this summer!

Also, let us know in the comments below any other ‘Wonders of Incredible India’ that you know can be the best choice to visit other than our pick.