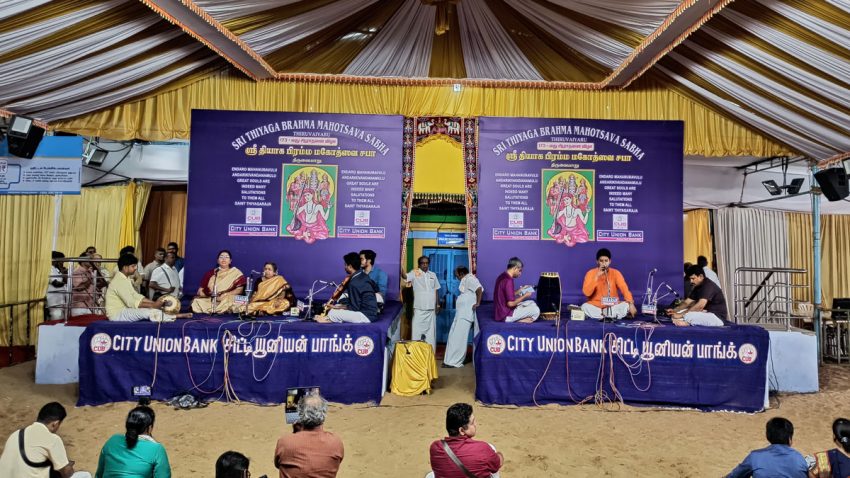 All You Need To Know About 173rd Thiruvaiyaru Thyagaraja Aradhana

Tamilnadu, known as the cultural hub and land of temples has yet another pride added to the list. If you are curious to witness the huge gathering of the greatest Carnatic vocalists and instrumentalists of the country at one place, then Thiruvaiyaru near Thanjavur will be the place you must be destined to.

Out of the three, Thyagaraja renowned as Thyagabrahmam had spent his entire life on creating compositions on Lord Rama. He had been a pioneer in introducing very many new techniques in Carnatic music and the most popular is Sangathi – a set of variations on a theme. In total, he has composed more than 25,000 songs in his entire lifetime introducing and using more than 200 ragas, which are still revered as treasures. Out of all his compositions, the five gems have been found out and they are popularly known as Pancha Rathna Keerthana and you can easily find that the audience in any musical concert will love to listen to these Keerthana(Hymns). The outpourings from his soul in the form of wonderful renditions are still considered as the matchless treasures showcasing his devotion to the Almighty.

The Aradhana (Ceremony of Adoration) is held every year on the anniversary of the demise of the saint. This is on Pushya Bahula Panchami day (the fifth day of the waning moon in the Hindu lunar month of Pushya). The Aradhana is conducted by the Sri Thyagabrahma Mahotsava Sabha and is held in the precincts of the samadhi (memorial) of the saint located at Thiruvaiyaru in Thanjavur district of Tamil Nadu, India.

In memory of this great musical prodigy, an annual music fiesta is held and in 2020, the 173rd Thiruvaiyaru Thyagaraja Aradhana Music festival is held between 11th and 15th of January. You can find large number of expert singers as well as those in the beginning phase of learning take it as a moment of pride to participate in this annual music concerts. Though the festival is conducted for five days, the prominently important event is Pancha Rathna Keerthana which is on the 15th of January when the musical tribute to the legend is offered by the singers sitting in front of the place where Saint Thyagaraja is laid to rest.

The grand musical tribute is named as Thyagaraja Aaradhana where hundreds of renowned musicians render the five songs called as “Pancharathna Keerthanas” composed by the Vetaran and this is considered to be the most auspicious part of the five days festival. The renditions are the real tribute to the great musical prodigy and all the audience are touched emotionally with the magical lyrics and the ragas. On the concluding day of the festival, the processional deity of Saint Thyagaraja is anointed and decorated. After the concerts get over, the deity is taken in procession around the streets of Thiruvaiyaru, attracting a large number of devotees. You can also visit the house where Saint Thyagaraja lived and composed wonderful renditions.

Thiruvaiyaru is at a close proximity to the world-renowned tourist destination Tanjore. The prime attractions in and around Thiruvaiyaru are the grand Aiyarappar Swamy Temple, Brihadeeswara Temple, Thanjavur Palace and Museum, Saraswathy Mahal Library at Tanjore, Airavatheswarar Temple at Darasuram and many temples around the region.

Plan a visit to be a part of the 173rd Thyagaraja Aaradhana in Thiruvaiyaru near Tanjore and get yourself soaked in the mystic power of music.

South Tourism offers various South India tour packages and customized tour packages for you to indulge in the grandest and finest musical concert in Tamil Nadu, making your holiday a special and unforgettable one in your life.

For tour details and bookings, feel free to visit www.southtourism.in