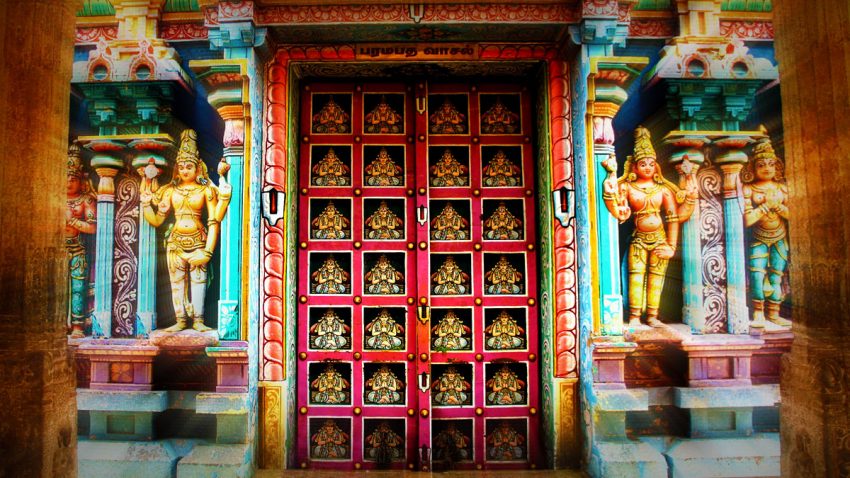 How about planning a visit to the most prominent Vishnu temples of South India on the auspicious day of Vaikunta Ekadashi this year? The annual festival celebrated during the Tamil month of Margazhi in every Vishnu temple is Vaikunta Ekadashi or it is popularly known as “Door To Paradise”, the most revered event for every follower of Sri Vaishnavism.

Nammalwar, one of the twelve saints in Sri Vaishnavism is believed to have attained salvation on this day and in commemoration of His devotion to God, the day is celebrated. Vaikunta Ekadashi falls on the eleventh day of the lunar calendar in Tamil month Margazhi, that is, between December and January in the Gregorian calendar and this time, Vaikunta Ekadashi falls on 6th January 2020.

South Indian temples dedicated to Lord Vishnu wears a festive look weeks before the festival. Elaborate rituals and poojas are conducted ten days prior to Vaikunta Ekadashi. On the day of the festival, before dawn, the northern gate of the temple is kept open, and Lord Vishnu with His gorgeous decorations comes out in a palanquin blessing His devotees waiting outside. The devotees observe a rigorous fast on the day believing that fasting on the day of Vaikunta Ekadasi is equivalent to observe fast on the other 23 Ekadashis falling throughout the year.

Witnessing Lord Vishnu coming out of the Door to Paradise and the devotees themselves passing through the door at least once in their lifetime will be a key to salvation, a popular belief in Sri Vaishnavism. You can see hundreds of people gathering in front of the Door To Paradise of even the smallest Vishnu temple on the day of Vaikuntha Ekadashi.

This article presents you with some of the most prominent temples across South India, where the Vaikuntha Ekadashi festival is celebrated very elaborately.

Srirangam, an island between the rivers Cauvery and Coleroon is acclaimed as the world’s largest functioning Hindu temple is found busy round the year with more than 400 festivals celebrated. Out of all, Vaikunta Ekadashi is considered to be very auspicious attended by devotees from all corners of the country and beyond. The processional deity called NamPerumal is adorned with the dress with precious stones called Rathnangi and taken out through the door, a ravishing sight to behold.

The presiding deity in the standing posture and is believed to be a self-manifested. The temple premises houses the world’s one of the largest kitchens feeding more than one lakh devotees every day. The Laddu offered as Prasadh in Tirumala is equally popular. The temple celebrates festivals every day and you can witness people disgorging round the clock.  On the festival day, the processional deity on a golden chariot is taken out through the Door to Paradise or Vaikunta Dwara.

Vaikunta Ekadashi festival is most pompously celebrated in Ramachandraswamy Temple, located on the banks of River Godavari in Badrachalam of Andhra Pradesh. Badrachalam is often referred to as Dakshina Ayodhya.

The temple with presiding deities as Lord Rama and His consort Goddess Sita is a very popular sacred center of Andhra Pradesh. On the day of Vaikunta Ekadashi festival, the deities of Lord Rama and His brother Lakshmana are taken out in procession through the Vaikunta Dwara.

Parthasarathy Temple in Triplicane, Chennai of South Indian state  Tamilnadu is a renowned temple dedicated to Lord Vishnu. The religious beliefs mention that the presiding deity of this temple Lord Parthasarathy is the one who was driving the chariot for Arjuna. This was during the war of Kurukshetra mentioned in the great Indian Epic Mahabharatha.

We can even see some scars on the face of the present-day idol in Parthasarathy temple, believed to have been caused during the Kurukshetra war. Vaikunta Ekadashi festival is celebrated pompously in this shrine with thousands of devotees attending the function of Lord Parthasarathy coming out of the Door to Paradise, and He is found to be adorned with gorgeous dresses and diamond jewelry.

Enroute from Bangalore to Mysore, situated is the popular Srirangapatna, the abode of Lord Sriranganathasamy. Srirangapatna is first of the Pancharanga Kshetra (Five abodes of Lord Ranganathaswamy) on the banks of River Cauvery.

The significance of these five temples is that the presiding deity is in the reclining posture. Srirangapatna is called as Adhi Rangam and the other four beings, Koviladi, Srirangam, Mayiladuthurai and Sirkazhi. Vaikunta Ekadasi is a very popular festival in Srirangapatna as grand as in other major Vishnu temples of South India. Thousands of devotees and tourists participate in the festival.

Varadharaja Perumal Temple, in Kanchipuram, deserves a special mention here for the celebration of the Vaikunta Ekadasi festival. The most popular Vishnu shrine in South India which was recently in news for the Raising of Athi Varadhar, an event conducted once in every FORTY years.

The Varadharaja Perumal temple is most frequented by tourists and devotees due to its proximity to Gateway of South India, Chennai. The elaborate rituals conducted during the days prior to and after Vaikunta Ekadashi reverberates the city with an influx of a maximum number of devotees.

Sri Anantha Padmanabha Swamy Temple in Thiruvananthapuram is the most sought after Vishnu temple in Kerala and the world’s richest temple. The significance of this temple is that the deity is in the reclining posture is visible through the three doors.

The head of the deity and the serpent Adisesha through the first door, the naval of the deity and the gold idols used for daily anointing and poojas through the second door and Feet of the deity through the last door. The deity is so big that it is made up of 12,008 Saligramams taken from the Gandaki River of Nepal, it can be viewed only like this. Vaikunta Ekadashi festival is called Swargavathil, meaning Passage to Heaven. The processional deities are taken out through the Vaikuntha Dwara, which is a scenic event to witness.

Be a part of the vibrant festival Vaikunta Ekadashi in any of the prominent destinations in South India, a unique Spiritual Sojourn!

Book a trip to South India with South Tourism and make sure you add these best places to visit in South India to celebrate a grand New Year 2020!

South Tourism offers you the best South India holiday packages and customized South India tour packages for you to discover the length and breadth of fabulous South India.