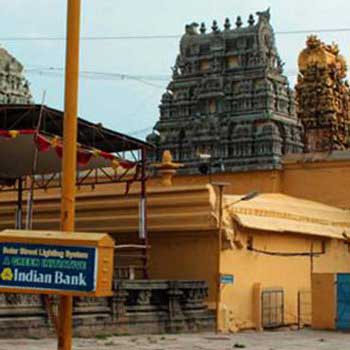 The City of Thousand Temples or The Silk City Kanchipuram the city of Gold is in Tamil Nadu, 75 km away from Chennai. This city did a record break of having most number of temples in India. We can see lots of Hindu temples sprouting out from each and every corner of Kanchipuram streets. This holy city is well connected by road and rail. The possible nearest airport is in Chennai.

Other than its temples and monuments, this lovely city is known for its splendid hand woven silk sarees. These silk sarees have some charismatic power that; it makes every woman to fall for it and so it is also called as “Silk city”.

Asia’s biggest International library is in Sri Chandrasekarendra Saraswathy Viswa Mahavidhyalaya deemed university in Kanchipuram. Adisankaracharya established his Episcopal seat (KamakotiPeetam) in Kanchipuram. It was a major Buddhist Centre established by the Mauryan Emperor Asoka It is also the birth place of C.N. Annadurai- the former Chief Minister of Tamilnadu.

River Palar flows across this city and it is the complete water source for these people. There are some lakes and ponds around here which are lively only during rainy days.

Shopping in Kanchipuram will be an exciting experience, especially for the ladies. The beautifully designed Kanchipuram Silks appeals the tourists to this temple city of Kanchipuram.

There are various fairs and festivals round the year at Kanchipuram. Some important festivals include the Brahmotsavam, Garudothsavam, and Car (ratham) festivals, which are held in the months of January, April, and May respectively. Silk Tourism Festival is organized in the Month of October.

By Road:Kanchipuram is 75 kms away from Chennai and is well connected by a good network of roads. There are frequent bus services from Kanchi to Chennai, Bangalore and other places.

By Air:There is no airport in Kanchipuram, and the nearest airport is in Chennai, which may take two hours to reach.

By Rail:This city is well connected by rail, and has railway station inside the city. Trains from Chennai, Madurai and Trichy arrive often.