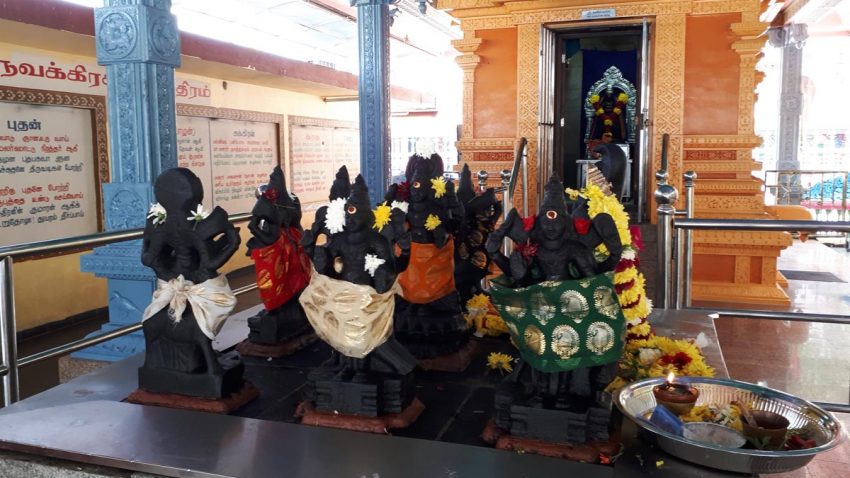 Why should we plan to visit  Navagraha Temples in Tamilnadu in this NewYear 2021?

Tamilnadu, the LandofTemples is a spiritually inclined South Indian State flocked by Tourists and Devotees round the year.

A long year has passed by with lots of uncertainties, losses and all-new jargon which even an infant is familiar now like Stress, Lockdown, Work from home, quarantine, containment zones and lot more. 2020 has ended and a vibrant 2021 is born with a new ray of hope and confidence.

Man is a social animal and is in need of people around with positive thoughts especially when he is depressed. The mythological and philosophical findings of Hinduism, which is world’s one of the longest surviving practices have installed temples at strategic locations of every residential circle. The temples were not only for holding the religious activities but also served many purposes. Few of them include inculcating social harmony and peace, center for boosting the local economy in the forms of fairs and festivals, center to motivate and instill confidence with a positive vibes of poojas and rituals done regularly and lot more in the list.

Navagraha Temples attract lakhs of devotees and tourists round the year as it is strongly believed in Hinduism that the planetary transitions in every individuals signified in Vedic Astrology are the major causes for predicting the changes in their lives. The key planets as per the astrology are Sun, Moon, Mercury, Mars, Jupiter, Venus, Saturn, Rahu and Kethu. The temples known by the name of the respective planetary God are collectively called as the Navagraha Temples in Tamil Nadu.

The temples have not followed any specific architecture, but all of them have followed an uniform style with the gateway tower above the sanctum and odd numbered precincts. Except for the Sun God, all other Navagraha Temples have Lord Shiva as their Presiding Deity. All the other temples are constructed in such a way that the presiding deity in the sanctum faces the direction of Suriyanar Koil, the temple for Sun God.

As the Navagraha tend to transit from one position to another in regular intervals, the astrological interpretations predict the good and bad effect of the transitions. Principles and customs of Hinduism recommends the means and ways of escaping the bad effects and to enjoy the good effects by offering prayers to these planetary deities. In line with the practices followed in other Hindu temples, the offerings and prayers are in the form of clothes, cereals, pulses flowers and jewels offered by the devotees. Every planetary deity has different color codes set of flowers and cereals. Lighting of lamps is also followed invariably all temples.

Plan your tour to Navagraha temples offering you the boons of prosperity and happiness in life !!

The architecture of the temple and towers, placing of idols in the sanctum and other sub shrines, codifications of daily rituals and festivals are all based on one or other scientific principles and it is strongly believed that worshipping the  Gods and Goddesses at the temples when we are distressed gives an assurance not to give up.

Out of thousands of temples dotted across Tamil Nadu, Navagraha Temples deserve a special mention here. Visiting Navagraha Temples and worshipping the supreme power there will surely help us to shed out our negative vibrations and sense of fear and ambiguity. Incidentally, the Nine temples representing each of the planets are situated around the Temple City Kumbakonam, popular for large number of temples and the world renowned festival Mahamaham celebrated once in 12 years.

What are Navagrahas? Is there any science behind it?

Navagrahas are the planets playing vital role in the Hindu astronomical sphere, dating back to the ages of Vedas. For any kind of hindrance, bad luck, illness or anxiety an individual has to go through in his life, the transitions in those planets are held responsible either auspiciously or inauspiciously.

Out of the nine planets, Seven are named similar to the Solar System and Two are Rahu and Ketu.

Yagna Valkiya Smriti  (about AD 300 or later) explains the features of these planets and the need for the worship of the planets (grahas) according to Hindu tradition, as stated below.

“One should specially worship that (planet) which, and whenever, it is cruel (malefic) to him”. This book discusses in detail about the effects of every planet on the life of an individual or on the society on the whole.

Is each of the Navagraha Temple unique? If So, How?

Yes, each of the Navagraha Temples is so unique with their religious properties to bless an individual or a society if worshipped with proper codifications. Of course, in all the nine temples Lord Shiva is the presiding deity and the respective planets are housed in sub-shrines.

There is only one consciousness, Have you heard about this? The essence of Quantum Physics. Though there are different loggerheads in Physics and Chemistry, they go well hand-in-hand. This is an analogy to the presence of Lord Shiva in all Navagraha Temples, but what is surprising is in all these temples, Lord Shiva has taken the back seat giving prime importance to the planet!

What is special about each of Navagraha Temple?

Let us quickly brief about each of Navagraha temples, its significance and codifications.

The Suriyanar temple for Sun God is not the largest in the chain, but fairly big. Avoid visiting this temple on Sundays owing to the crowd. What is special about this temple is that this is the only shrine out of the nine, which has sub-shrines for all the other planets.

Suryanar Koil is a small hamlet 2kms north of Aduthurai Town. Hire a cab as there are many temples around this region to be visited.

Other popular places to visit around:

The second major planet controlling the human mind is Chandran or Moon God. This temple has Lord Kailasanathar as presiding deity and it is one of the 274 popular shrines glorified by the songs of Saivaite Saints Samayakuravar Nalvar. Further Thingaloor is the birthplace of Appoodhi Adigal, the disciple of Tirunavakkarasar. The Moon God plays a vital role in shaping our thoughts in a constructive or destructive manner depends upon his transition. Worshipping him in this temple, helps us to think properly and act upon.

Thingaloor Chandran temple is about 36km from Kumbakonam on the way to Thiruvaiyaru.

Other places to visit around:

Ganapathy Agraharam and Kabisthalam are popular locations for centuries-old temples

A 2000 years old temple with a historical name as “Pullirukkuvelur”, referring to the historical data that this is the place where the giant bird Jatayu of Ramayana lived, Rig Veda was worshipped and Lord Muruga is of significant importance. “Pul –Bird”, Irukku – Rig Veda and “Vel – Lord Muruga’s weapon”. In the ancient days, Vaitheeswaran Koil was revered as the headquarters of medical science as there were remedial measures for around 4448 diseases. In addition, the two prominent features are, this is the temple for Navagraha planet Mars/ Chevvai and this is the place where the father of Indian Medicine Dhanvantri attained salvation.

Special Features of the temple:

The temple is at 14km from Mayiladuthurai

The Thiruvenkadu Swetharanyeswarar temple is one of the Navagraha Temples where Lord Budhan is worshipped. Devotees throng this temple throughout the year to worship Lord Budhan.

Transit day of Lord Guru from one Zodiac sign to the other which happens every two and a half years, is believed to have greater impact on one’s life. The Alangudi temple is said to exist from time immemorial and . Kasi Aaranyam , Thiru erumpoolai are the other names for this place Alangudi.

Alangudi is very near to the temple town Kumbakonam  at a distance of 14km.

Lord Shiva here in this temple is worshipped as the presiding deity and Navagraha Lord Sukran is believed to be in the stomach of Lord Shiva. The temple is so significant that Lord Shiva blessed Parasara Muni, a renowned saint of the ancient ages, with His cosmic dance. This sacred place is also called as Palasa Vanam or Agni Sthalam and so the presiding deity is called as Agneeswarar. It is believed that Lord Brahma witnessed the celestial wedding of Lord Shiva at this sacred place.

Besides Poombuhar Beach, Silappathikara Art Gallery, Town Gateway you can also visit the Grand Anaicut, an architectural marvel and an ancient water management system built by Chola King Karikala, 2000 years ago, which is still functioning and is a major source of water supply to the delta region of Tamilnadu.

The Thirunallaru Sri Saneeswara Bagwan Temple is believed to exist from time immemorial. The interesting story connected to this temple is, the celestial Gods called Devas wanted to marry the Princess of the Nishadha Kingdom, Damayanthi. But she married another King called Nalan. The furious Devas complained to Saneeswar and he made Nalan’s life miserable for seven and half years. At last, Nalan arrived at Thirunallar and worshipped Lord Shiva present in the name of Lord Dharbaranyeswarar. He got rid of all his problems and got a promise from Lord Saneeswara that whoever comes to this place and worship him, should not be affected by any difficulties. So is the sacred temple very popular among the devotees across the country.

Thirunallar is at a distance of 33km from Mayiladuthurai and 5km from Karaikal.

The temple at Tirunageshwaram is visited by devotees to escape from ill effects of planet Rahu. To know further, Once there was a saint Suseelar, whose son was attacked by the Celestial serpent Dakkagan. Saint Suseelar cursed him to take birth as a human being on earth. After his hard penance towards Lord Shiva, he worshipped Him in the form of an idol Lingam at Thirunageshwaram and got relieved from His curse. As lord Raghu himself got his curse relieved, this place became so sacred with the Naganatha Swamy as the presiding deity and the temple has become very popular among the devotees across the country.

Thirunageshwaram is at a distance of 6 km to the east of Kumbakonam.

Temples in Trichy ,Tanjore and Kumbakonam.

Ketu is generally referred to as shadow planet. The historic event referred to this temple is the churning of ocean to give the nectar to celestial Gods. Vasuki was the serpent used for the churning operation and at one point it got exhausted and spit venom. To protect the celestial Gods from consuming the poison, Lord Shiva Himself took the poison. For Her mistake, Vasuki did a penance and Lord Shiva graced with His blessings. From then on, this particular temple is dedicated to Lord Ketu and it is also known as South Lunar Planet.

The temple is at a distance of 35 km from Karaikal.

Other places to visit around:

Start the New Year with New hopes, New plans and completely New phase of life, unlike the previous year with a revitalizing Navagraha Temple Tour, a truly soulful journey to detox the mind and re-energize the body, mind and soul, the need of the hour for every individual, head of a family, head of the company or whoever it may. Soothing our mind and rejuvenating ourselves for a better tomorrow, keeps us moving on, what may come!

We will be the happiest to assist for your Navagraha Temple Tour plans. You can express your interest anytime at [email protected] .

Look for other trending tour packages at https://bit.ly/3p6H2Yk