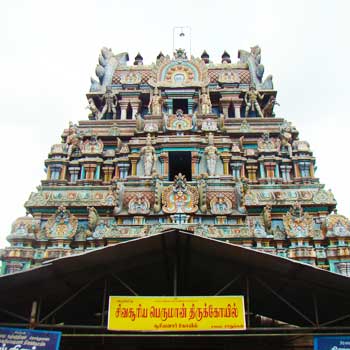 This is the only temple in Tamil Nadu, where separate shrines are there for all the nine planetary deities. The temple is a 900 years old Dravidian Architecture built by the Chola King Kulothunga Cholan. The presiding deity is the Sun God. Usha and Chayadevi are His consorts.

Though the temple was built by the Tamil King Kulothunga Cholan, the temple has been patronized by the King of Srivijayam, the current day Indonesia. This depicts the religious connection between the two countries. This is the only temple with separate shrines for all the nine planetary deities. Suriyanar koil tops the list in the pilgrimage tour of Navagraha temples.

A ten days long festival called Ratha Sapthami is celebrated during the Tamil month Thai which falls during Mid-January to Mid- February. Also, celebrations with special poojas and rituals are conducted during the transition days of Saturn and Jupiter.

By Rail : The nearest railway station is at Aduthurai. You can prefer to travel by road from either Tanjore or Kumbakonam railheads.

By Air : The nearest airport is at Tiruchirapalli. From there, you can reach the temple in less than two and a half hours.