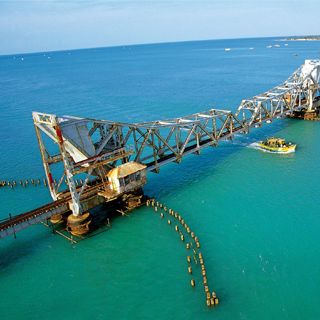 A very important spiritual destination most frequented by the devotees across the country is Rameswaram which is located in the down south of Tamil Nadu, in the southern part of India. The Ramanathaswamy temple in Rameswaram is believed as the most precious one as Lord Rama, the hero of the grand epic Ramayana, himself carried out the poojas and rituals to the presiding deity here.

Rameswaram is acclaimed as one of the Four Char Dhams in India:- Rameswaram in South, Badrinath in North, Puri in the East and Dwaraka in the West. The pilgrims who plan to visit Varanasi make it a point to visit Rameswaram before and after their visit to Varanasi, which is believed to complete the pilgrimage.

The Ramanatha Swamy temple in Rameswaram is one of the very few temples in India to have the longest corridors. The symmetrically placed figurines on both sides gives the corridors the most deserving grandeur and beauty.

Besides the spiritual arena of Rameswaram, the mid-sized town is popular for the beach and the water sporting activities. Tourists visiting Rameswaram prefer the activities like kayaking, snorkelling, banana boating, stand up board. There are lot more options to choose from.

Rameswaram is very much renowned place owing to the presence of the Pamban Bridge across the sea. The Pamban Bridge is a railway bridge which connects the Pamban Island to the outside world. The engineering marvel of the bridge is so excellent that the tourists and the locals are amazed to witness the bridge being opened for the ships to cross through and again getting closed. The Pamban bridge is India’s first longest sea bridge and recently, a bridge in parallel has been built for the surface traffic.

How to Reach Rameshwaram

Air : Madurai is the airport nearest to Rameswaram, which is at a distance of 180 kms.

Rail : Trains from all the major cities like Chennai, Trichy, Coimbatore and Madurai pass through Rameswaram. There are many trains that connect all the important destinations of all states as well with Rameswaram

Road : Rameswaram is well connected by a road network with the neighbouring cities of Tamil Nadu.